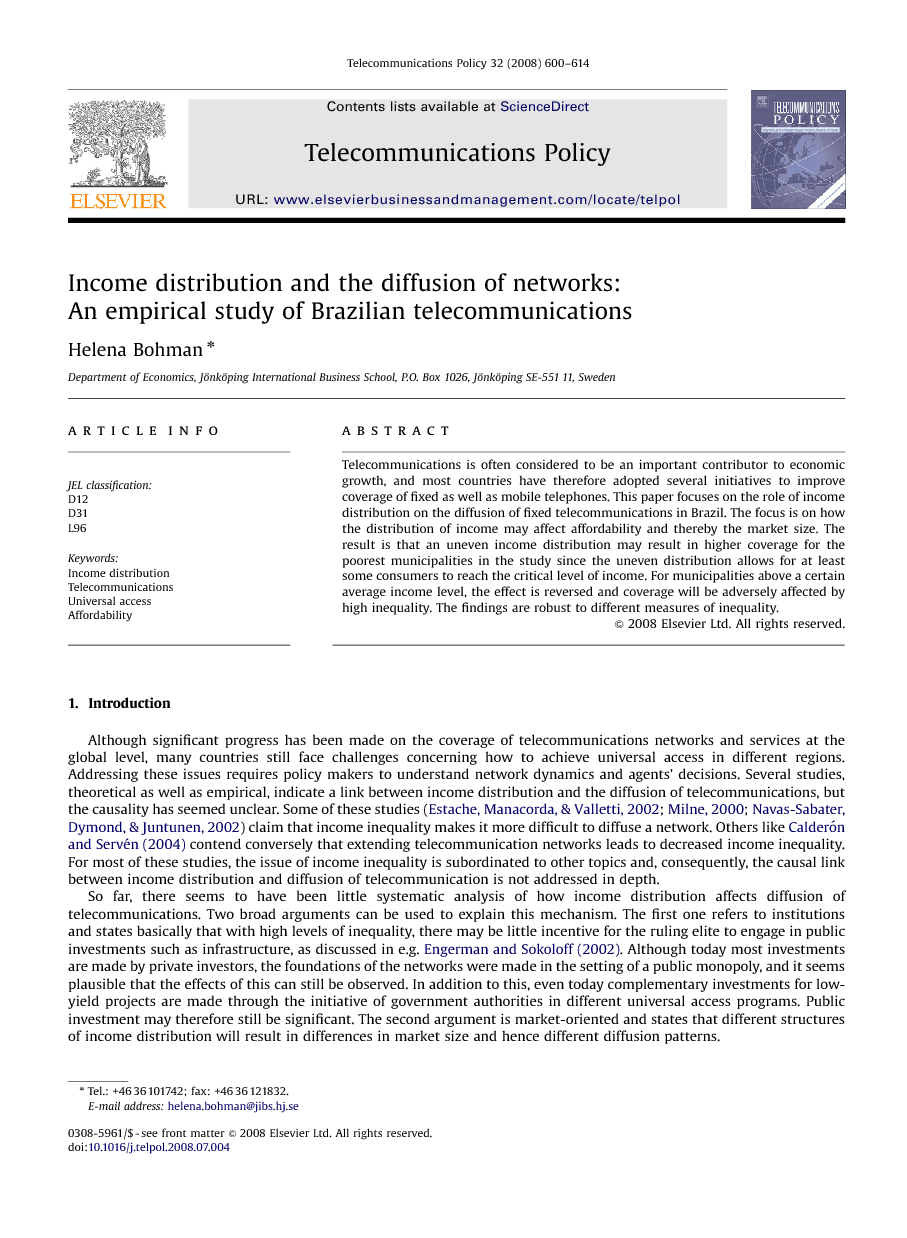 Telecommunications is often considered to be an important contributor to economic growth, and most countries have therefore adopted several initiatives to improve coverage of fixed as well as mobile telephones. This paper focuses on the role of income distribution on the diffusion of fixed telecommunications in Brazil. The focus is on how the distribution of income may affect affordability and thereby the market size. The result is that an uneven income distribution may result in higher coverage for the poorest municipalities in the study since the uneven distribution allows for at least some consumers to reach the critical level of income. For municipalities above a certain average income level, the effect is reversed and coverage will be adversely affected by high inequality. The findings are robust to different measures of inequality.

Although significant progress has been made on the coverage of telecommunications networks and services at the global level, many countries still face challenges concerning how to achieve universal access in different regions. Addressing these issues requires policy makers to understand network dynamics and agents’ decisions. Several studies, theoretical as well as empirical, indicate a link between income distribution and the diffusion of telecommunications, but the causality has seemed unclear. Some of these studies (Estache, Manacorda, & Valletti, 2002; Milne, 2000; Navas-Sabater, Dymond, & Juntunen, 2002) claim that income inequality makes it more difficult to diffuse a network. Others like Calderón and Servén (2004) contend conversely that extending telecommunication networks leads to decreased income inequality. For most of these studies, the issue of income inequality is subordinated to other topics and, consequently, the causal link between income distribution and diffusion of telecommunication is not addressed in depth. So far, there seems to have been little systematic analysis of how income distribution affects diffusion of telecommunications. Two broad arguments can be used to explain this mechanism. The first one refers to institutions and states basically that with high levels of inequality, there may be little incentive for the ruling elite to engage in public investments such as infrastructure, as discussed in e.g. Engerman and Sokoloff (2002). Although today most investments are made by private investors, the foundations of the networks were made in the setting of a public monopoly, and it seems plausible that the effects of this can still be observed. In addition to this, even today complementary investments for low-yield projects are made through the initiative of government authorities in different universal access programs. Public investment may therefore still be significant. The second argument is market-oriented and states that different structures of income distribution will result in differences in market size and hence different diffusion patterns. This paper is based on the second argument and its purpose is to analyze the role of income distribution in the process of telecommunication coverage from an affordability approach. The focus is on fixed telecommunications in Brazil between 1991 and 2000, followed up by a discussion of mobile telecommunications in 2005. The data used is from household surveys (UNDP, 2000). Brazil provides an interesting case since, in addition to having one of the most unequal distributions of income in the world, the size of the economy and large regional differences offer plenty of information for empirical analysis. This paper contributes to the existing literature in three ways. First, it provides a theoretical setting clarifying why income distribution can be expected to affect the diffusion of technology. Secondly, it shows how this link can be connected to traditional ways of measuring distribution and can therefore be incorporated easily into economic analysis. Thirdly, it provides robust empirical findings that support the theory, using the case of Brazilian diffusion of fixed telecommunications as a reference point. Some previous studies exist focusing on the affordability aspect. Artle and Averous (1973) use affordability to derive a logistic diffusion curve. Milne (2000) uses an affordability approach and demonstrates a non-linear relation between telecommunications and income distribution. Through simulations she predicts that high inequality has a positive effect on network size at incomes below a certain average income level, whereas above that level, an unequal distribution becomes detrimental for the diffusion process. In this paper, the affordability approach is applied to Brazilian data and the results are well in line with Milne (2000). The structure of the paper is as follows: Section 2 contains a theoretical discussion of why income inequality can be expected to affect diffusion of telecommunications. This is followed by a consideration of some previous research on this topic. Section 3 provides some background information on the Brazilian economic environment and introduces the telecommunications sector and income distribution in Brazil. In Section 4, the empirical part is introduced by discussing data and calculations of variables. Section 5 presents the results from the empirical study, followed by conclusions in Section