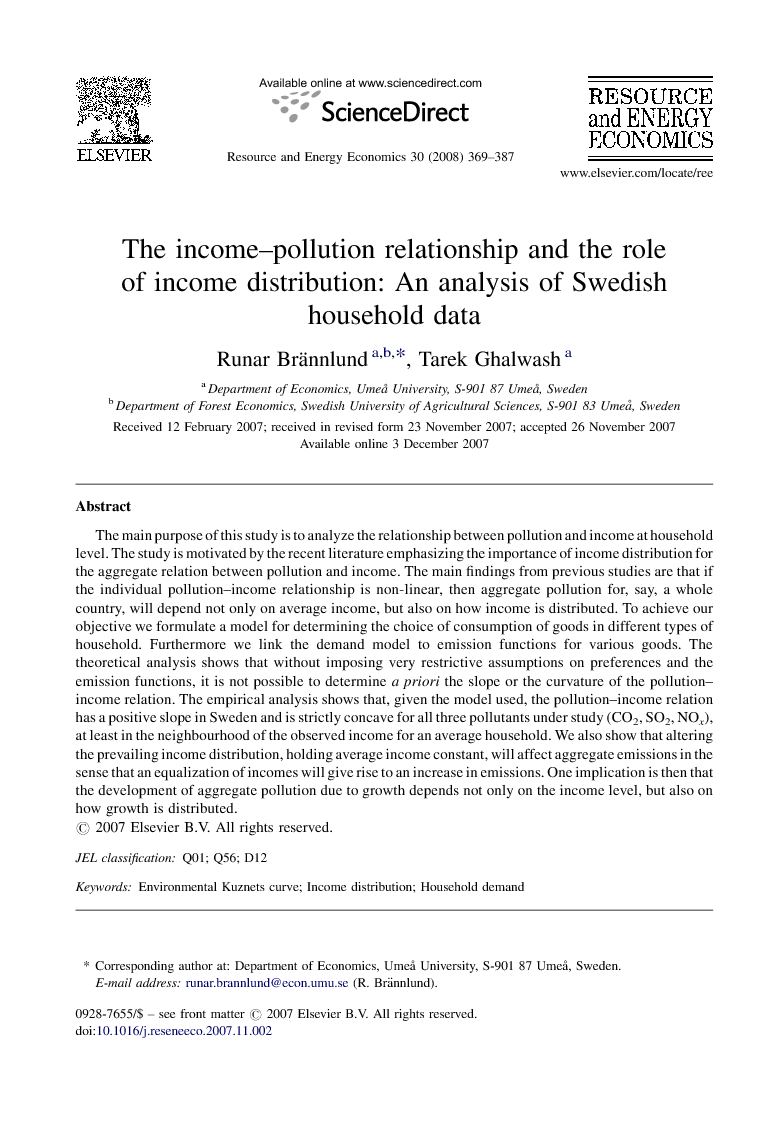 The main purpose of this study is to analyze the relationship between pollution and income at household level. The study is motivated by the recent literature emphasizing the importance of income distribution for the aggregate relation between pollution and income. The main findings from previous studies are that if the individual pollution–income relationship is non-linear, then aggregate pollution for, say, a whole country, will depend not only on average income, but also on how income is distributed. To achieve our objective we formulate a model for determining the choice of consumption of goods in different types of household. Furthermore we link the demand model to emission functions for various goods. The theoretical analysis shows that without imposing very restrictive assumptions on preferences and the emission functions, it is not possible to determine a priori the slope or the curvature of the pollution–income relation. The empirical analysis shows that, given the model used, the pollution–income relation has a positive slope in Sweden and is strictly concave for all three pollutants under study (CO2, SO2, NOx), at least in the neighbourhood of the observed income for an average household. We also show that altering the prevailing income distribution, holding average income constant, will affect aggregate emissions in the sense that an equalization of incomes will give rise to an increase in emissions. One implication is then that the development of aggregate pollution due to growth depends not only on the income level, but also on how growth is distributed

The main purpose of this paper is to investigate the relationship between pollution and income at household level. The analysis is motivated by the recent literature emphasizing the importance of income distribution for the aggregate relation between pollution and income (see for example Boyce, 1994, Stern, 1998, Torras and Boyce, 1998, Scruggs, 1998, Heerink et al., 2001 and Huang, 2005). For example, Heerink et al. (2001) showed that if the relationship between pollution and income is non-linear at the individual level, the aggregate pollution–income relationship will depend on income distribution in addition to income. Thus, if the individual relationship is non-linear, omitting income distribution from the aggregate analysis will produce biased results. However, no studies to date have used a structural approach to investigate the way in which individual (or household) pollution changes with economic growth. The bulk of the empirical analyses available are mostly reduced from aggregate types of studies that are unable to encompass tests of how income changes affect individual pollution via changes in the real consumption basket. Here we will address the issue on the household level by estimating a demand model for Swedish households which is directly linked to emissions of sulphur dioxide (SO2), nitrogen oxide (NOx), and carbon dioxide (CO2). We will then use the result to illustrate how changes in income distribution affect aggregate emissions of CO2, SO2 and NOx in Sweden. The relationship between environmental performance and economic development has been the subject of discussion for a long time. One line of argument is that economic growth inevitably leads to more emissions and ultimately to degradation of the natural environment (Meadows et al., 1972 and Meadows et al., 1992). On the other hand it is argued that such linear relation between economic growth and environmental degradation may be a wrong description resting on too static assumptions. This latter argument can be found in, for example, Grossman and Krueger, 1991 and Grossman and Krueger, 1995, who showed that for some emissions there appears to be an inverted U-shaped relationship between emissions and income. Countries with relatively low income appear to have relatively low emissions, middle income countries have relatively high emissions, and high income countries tend to have relatively low emissions. Thus the conclusion would be that as a poor country gets richer, emissions rise. However, when income passes a certain critical level emissions start to fall. This inverted U-shaped relationship between emissions and income has been dubbed the environmental Kuznets curve (EKC). The discovery of this potential relationship triggered substantial research efforts in this area, theoretical as well as empirical. The theoretical literature has focused mainly on the assumptions required with respect to technology/preferences and emissions for an EKC relationship to exist (Lopez, 1994, Selden and Song, 1995, McConnell, 1997, Kriström, 2000 and Andreoni and Levinson, 2001). However, the bulk of the empirical literature differs substantially from the theoretical. In general the empirical models are a reduced form type using cross-country data over relatively short time periods. A typical empirical model specifies emissions as a non-linear function of income, income distribution, and a number of country specific characteristics such as population density, trade intensity and openness to trade (see Grossman and Krueger, 1991 and Grossman and Krueger, 1995 and Stern, 1998).1 One conclusion from these studies is that openness seems to be beneficial to the environment.2 Another conclusion from more recent studies is that using mean income may lead to biased results due to skewed income distributions. Instead the use of the median income is proposed (see Stern, 1998). According to Boyce (1994), Torras and Boyce (1998) and Bimonte (2002), an increase in equity, measured by the Gini coefficient, shifts the EKC curve leftwards, implying a turning point at a lower income level. These arguments can be viewed as political economy arguments and may of course be very important on the macro scale. Heerink et al. (2001) on the other hand get the opposite result for several environmental indicators analyzed on a cross-section of different countries. Thus, according to their results there may be a trade off between income equality and environmental quality. More importantly they conclude that this effect may be due to a strictly concave pollution–income relation at the individual level that dominates over a possible political economy effect that works in the opposite direction. As Heerink et al. (2001) and Scruggs (1998) argues, on both theoretical and empirical grounds, that there may be a negative relation between equity and environmental quality. Departing from a microeconomic framework Ravallion et al. (2000) analyzes changes in aggregate emissions due to changes in income and income distribution, both between and within countries. They find that there is a trade off between income equality and emissions in the sense that a redistribution from poor to rich comes at the expense of higher aggregate emissions. However, they also find a positive and concave relationship between aggregate emissions and growth. Thus, over time under a growth scenario the trade off between equality and emissions will be become less severe due to the concavity property. The rest of this paper is structured as follows. In Section 2 we provide a discussion of how the household pollution–income relation may effect the aggregate relation and lay out the basis for our structural model. In Sections 3 and 4 we discuss in greater detail how consumption patterns and emissions are linked, as well as providing the modelling framework and a description of the data used in the analysis. Results from the econometric model are presented in Section 5, along with an empirical analysis of the pollution–income relationship. The paper ends with some concluding remarks in Section 6.

The analysis in this paper is motivated by the recent literature emphasizing the importance of income distribution for the aggregate relation between pollution and income. The main finding from previous studies is that if the micro, or individual pollution–income relationship is non-linear, then the aggregate pollution, for say a whole country, will depend not only on average, or aggregate income, but also on how income is distributed. Our aim was not only to determine which conditions on individual preferences and the link between consumption and pollution would lead to a linear relationship, but also to empirically assess the relationship. We have shown that the sufficient condition for a positive and linear pollution–income relationship is a rather restrictive combination of certain preferences and a very specific link between consumption and pollution. In fact, it is not very likely that we would observe such a combination in practice. Thus we can conclude that it is not possible to say much about the curvature a priori rather, it is an empirical issue that depends on the particular links between consumption and pollution, as well as preferences over the various consumption goods. The results from the empirical analysis show that, at least in a close neighbourhood of observed income and pollution, we can reject linearity for all three types of pollutions, CO2, SO2, and NOx. According to our results the pollution–income relationships are all strictly concave. Thus the implication is that income distribution seems to matter in the sense that equalization of income will lead to higher emissions. Another conclusion is that for any given income distribution aggregate emissions will increase at a slower rate under an income growth scenario. This means that under a growth scenario the trade off between emissions and equality will become less severe. These findings are in line with the results from the cross-country study in Ravallion et al. (2000). The basic reason for the concavity property can be found in the negative correlation between emission intensities and income elasticities for the various goods. Goods with relative high-income elasticities tend to have relatively low emission intensities, and vice versa. This means that an increase in income tends to give rise to a move from high emission-intensive goods to low emission-intensive goods. A typical example is consumption of petrol for cars and consumption of recreation. Petrol has a relatively low-income elasticity (below one), but very high emission intensity, whereas recreation has a relatively high-income elasticity, but relatively low emission intensity. Hence, consumption of petrol will grow at a lower rate than income, and recreation at a higher rate, which gives rise to a slowdown in emissions since recreation is less-emission intensive. The analysis we provide here is admittedly based on several restrictive assumptions, and the results should for this reason be handled with care. Perhaps the most restrictive assumption is the fixed emission intensities, at least if the objective is to analyze the effects of large changes in income. An interesting prospect for future research is thus to have a more general equilibrium type of approach in which the emission intensities are functions of income, since income to some extent is related to technical progress which in turn also affects production and abatement technology. For such an approach to be possible we would need time-series data for the emission intensities; work to compile a database with time series is currently underway.