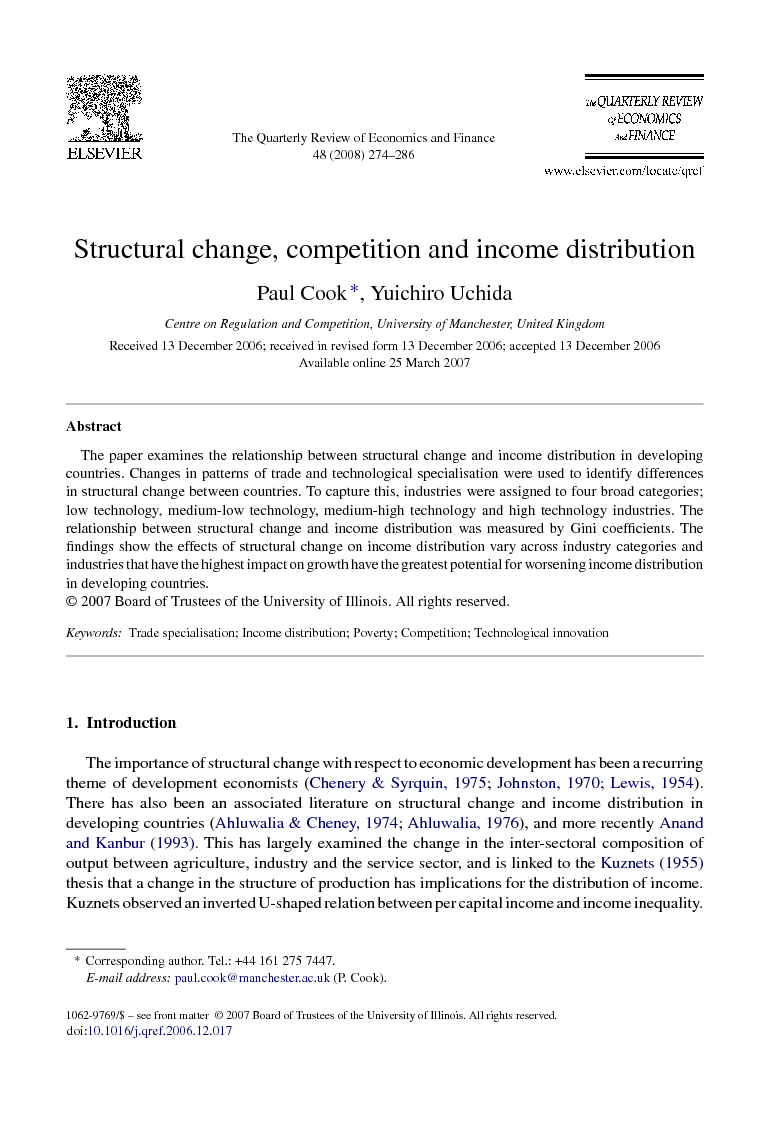 The importance of structural change with respect to economic development has been a recurring theme of development economists (Chenery & Syrquin, 1975; Johnston, 1970 and Lewis, 1954). There has also been an associated literature on structural change and income distribution in developing countries (Ahluwalia & Cheney, 1974; Ahluwalia, 1976), and more recently Anand and Kanbur (1993). This has largely examined the change in the inter-sectoral composition of output between agriculture, industry and the service sector, and is linked to the Kuznets (1955) thesis that a change in the structure of production has implications for the distribution of income. Kuznets observed an inverted U-shaped relation between per capital income and income inequality. It was observed that in slow growing largely agricultural based developing economies income inequality was greater than in developed economies. Furthermore, Kuznets postulated that at relatively low levels of per capita income there was a positive relationship between the growth of income and inequality. Once a higher level of income was obtained inequality declined. Earlier empirical support for this can be found in the studies conducted in the 1970s (Ahluwalia, 1976 and Chenery, 1979; Chenery & Syrquin, 1975; and Robinson, 1976, among others). In contrast, more recent studies have found evidence that casts a doubt over the existence of the inverted U-curve relationship (Alesina and Rodrik, 1991; Clarke, 1995; Persson & Tabellini, 1990; Ravallion, 1995, among others). Specifically, for instance, Bruno, Ravallion and Squire (1996) have found that countries with high income inequality experience lower economic growth, whereas those with low income inequality achieve higher growth. Deninger and Squire (1996) have found a negative relationship between initial income inequality and growth using their new income distribution database. Dastidar (2004), examining inter-sectoral transformation in 18 developing countries between 1960 and 1994 and drawing on the Deninger and Squire database, concluded that structural change or a transition from agriculture to industry does not affect overall inequality. Dastidar argues that in Asia income distribution has only changed slowly, giving little support to the Kuznets thesis, and that other factors explain changes in income distribution. More recently, there has been interest in examining the inter-industry pattern of development as part of structural change (Lall, 2000). In particular, a central feature of empirical research in this area has rested on examining patterns of trade and technological specialisation as evidence of structural change and developing economies catching up. This paper develops this approach by reporting new findings on patterns trade and technological specialisation and using these to investigate the relationship between structural change in developing countries and income distribution and poverty. The paper is organised into six main sections. Following the introduction, section two discusses the role of competition in relation to growth and highlights the importance of change. The third section briefly reviews the literature on income distribution and poverty in relation to structural change. Section four outlines the approach of this paper in statistically examining the relationship between growth, structural change and income distribution. Section five reports and interprets the results of empirical analysis. The final section explores some of the policy implications arising from the analysis and draws conclusions.