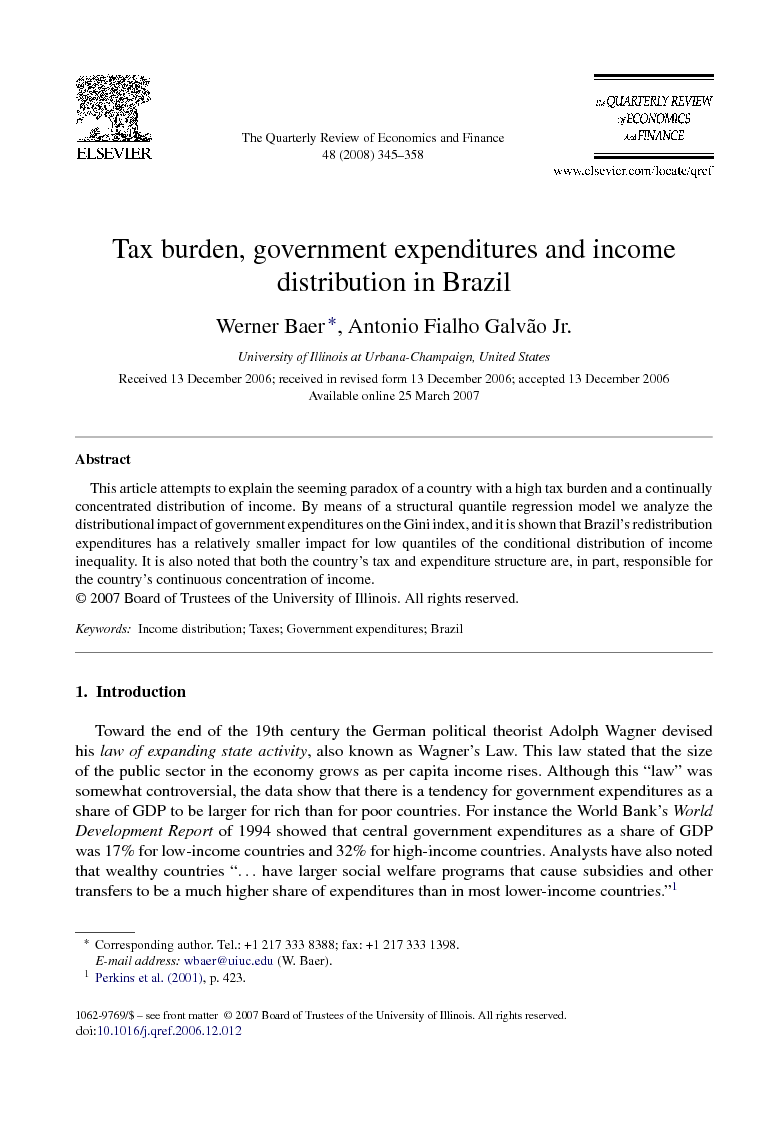 Toward the end of the 19th century the German political theorist Adolph Wagner devised his law of expanding state activity, also known as Wagner's Law. This law stated that the size of the public sector in the economy grows as per capita income rises. Although this “law” was somewhat controversial, the data show that there is a tendency for government expenditures as a share of GDP to be larger for rich than for poor countries. For instance the World Bank's World Development Report of 1994 showed that central government expenditures as a share of GDP was 17% for low-income countries and 32% for high-income countries. Analysts have also noted that wealthy countries “… have larger social welfare programs that cause subsidies and other transfers to be a much higher share of expenditures than in most lower-income countries.”1 Similarly, in his review of world fiscal systems Musgrave noted that “… the rise in the overall expenditure to GNP ratio has been due primarily to the growth of social services. This reflects in particular a growing re-distributional concern, rather than a rising demand for social goods as such. It appears that the underlying forces of social and political change greatly outweighed any tendency … for the transfer share to fall with rising per capita income.”2 Furthermore, he found that the “… rise in the relative importance of social services, which make heavy use of transfer payments, suggests a considerable increase in the importance of transfer payments relative to public purchases.”3 One would thus expect to find the tax burden of most low income countries to be lighter than the tax burden of wealthy countries, and at the same time that the distribution of income to be more equitable in higher than in lower income countries. It is thus striking to find that in Brazil, one of the major emerging countries, the tax burden is similar to that of many advanced industrial countries, its income distribution is among the most concentrated in the world. It is the purpose of this article to throw some light on this seeming paradox. Some previous studies focused on some of the elements which might lead to an explanation of the determinants of inequality linked to the fiscal system, especially its social expenditures. For instance, De Mello and Tiongson (2006) cross-section study found that “… re-distributive spending may be inefficient as an instrument to reduce poverty and to improve income distribution because the benefits of public spending may be captured by the non-poor.” (p. 303). Carneiro, De Mello, and Tiongson (2002) made a study of 37 industrial and developing countries in 1972–1987 and found that “… the countries where redistributive public spending is more needed were found to be the ones that are less likely to redistribute income through public policies.” (p. 103). Another recent study by Siqueira, Nogueira and Levy (2002) attempted to identify the types of households which benefit from federal government expenditures in Brazil. They came to the conclusion that Brazil's tax and benefits system is deceptively small given the substantial amount of resources involved. Clements (1997) found that government social expenditures in Brazil have exacerbated income inequalities. Another set of studies (Barros & Foguel, 2000; Hoffmann, 2003 and Ramos, 2000; von Amsberg et al., 2000) showed that one of the reasons that the Brazilian government did not succeed in eliminating poverty was due to the inadequate targeting of public expenditures. Within this framework we shall expand the study of the relation of the fiscal structure to the distribution of income. We examine some evidence with regard to the distribution of the tax burden4 of the tax system in Brazil. In addition, we estimate the impact of government expenditures on the country's income distribution5 using a structural quantile regression model. An examination of descriptive statistics on taxes and government expenditures give strong evidence that both the tax burden and government expenditures favor the higher income classes, which means that the country's fiscal system has a relatively low redistributional impact. In addition, the results of estimates of the effects of government expenditures on income inequality, using municipality data, present evidence that in order to reduce income inequality, the government would have to emphasize in its expenditure patterns those programs which benefit more municipalities with high-income inequality. The article is organized as follows. Section 2 presents an overview of tax burden and income inequality around the world. Section 3 presents some evidence for Brazil's tax burden and government expenditure. Section 4 proposes an econometric model of Brazil's government expenditures and income distribution. Finally, Section 5 contains a general conclusion.