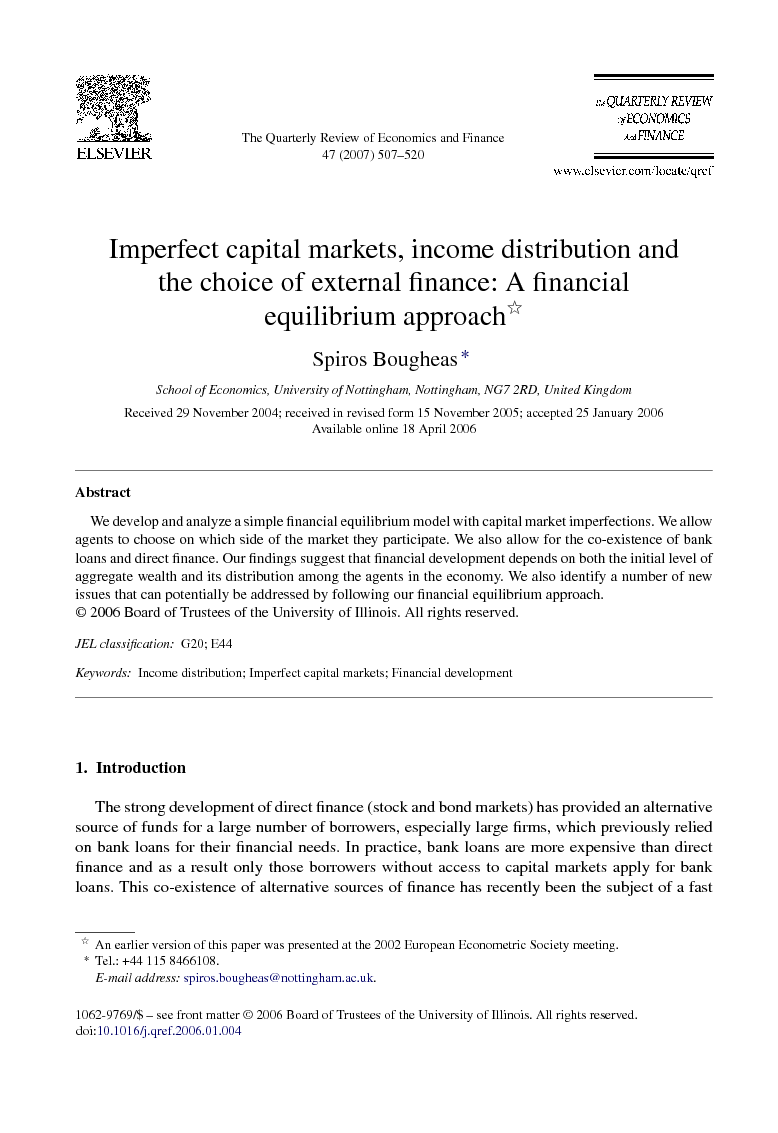 We develop and analyze a simple financial equilibrium model with capital market imperfections. We allow agents to choose on which side of the market they participate. We also allow for the co-existence of bank loans and direct finance. Our findings suggest that financial development depends on both the initial level of aggregate wealth and its distribution among the agents in the economy. We also identify a number of new issues that can potentially be addressed by following our financial equilibrium approach.

The strong development of direct finance (stock and bond markets) has provided an alternative source of funds for a large number of borrowers, especially large firms, which previously relied on bank loans for their financial needs. In practice, bank loans are more expensive than direct finance and as a result only those borrowers without access to capital markets apply for bank loans. This co-existence of alternative sources of finance has recently been the subject of a fast growing literature that aims to theoretically explain the reasons behind the proliferation of financial sources.1 Most of the literature has followed a partial equilibrium approach by focusing on the demand side of financial markets. In the majority of the models, the economy comprises of a fixed number of firms that each needs funds to finance a fixed size project. Firms are distinguished by their level of net worth that determines, if any, their source of finance. Funds are supplied either by financial intermediaries or the capital market (bonds and/or equity). Total credit in these models is completely determined on the demand side of the market. An interesting exception is the paper by Bolton and Freixas (2000) where the supply of funds is endogenous and it is simply specified as a function of the interest rate. In contrast to the rest of the literature, in that model the equilibrium interest rate is endogenously determined. More general formulations have been considered in financial market imperfections models where firms have access to a single source of finance.2 In these models, agents are divided into two types, namely borrowers (entrepreneurs) and lenders. Both the supply and the demand for funds are endogenous and their interaction determines the equilibrium interest rate. In this paper, we explore a further generalization of the financial equilibrium approach. Our starting point is the observation that changes in market conditions do not only affect the financial options of borrowers and the investment opportunities of lenders but also influence agents’ participation decisions. Put differently, an agent's decision of whether to participate on the supply or on the demand side of the market is itself endogenous. Thus, our main contribution is to introduce both endogenous participation and more than one source of funds in a unified framework where financial markets are imperfect. Asymmetries in the distribution of information among heterogeneous agents might impose restrictions on a sub-group of these agents not only on their choice of external finance but also on its overall availability. In order to investigate these issues we are going to consider a model where the only heterogeneity between agents is their initial level of wealth. Potentially, all agents can become entrepreneurs. We are going to demonstrate that when capital markets are imperfect, poor agents are unable to finance their projects and become lenders, agents with low-medium wealth levels borrow from banks, agents with medium-high wealth levels have access to the capital market and wealthy agents self-finance their projects. We also show that the exact taxonomy depends on both the aggregate level of wealth in the economy and its distribution. Then, we use our framework to analyze issues related to the interplay economic development and financial development. More specifically, we investigate how changes in income inequality affect both financial development and average welfare. Capital market imperfections arise in our model because it is costly for lenders to observe the realized returns of other agents’ projects. This ‘costly state verification’ environment was originally studied by Townsend (1979). In our model, relatively wealthy agents can self-finance a sufficiently high fraction of their projects and as a result lenders do not need to verify their returns. In contrast, agents with relatively low wealth endowments need to have the returns of their projects verified and as a consequence face higher interest charges. Thus, there are two types of financial contracts: namely, contracts that do not involve monitoring of (for example, equity) and contracts that require that the lenders monitor the activities of the borrowers (for example bank loans).3 Endogenous participation of agents has also been considered by Aghion and Bolton (1997), Galor and Zeira (1993) and Greenwood and Jovanovic (1990) that study the relationship between economic development and financial market imperfections. However, in these papers there is only one source of external finance available while we allow for both bonds and loans. There are also differences between them and our paper in the treatment of financial markets. Greenwood and Jovanovic (1990) allow for the formation of coalitions whose role is to collect and analyze information and thus improve the allocative efficiency of the economy. In Aghion and Bolton (1997) the source of imperfection in the financial market is entrepreneurial moral hazard while in Galor and Zeira (1993) agents can evade debt payments. In the following section, we specify the economic environment. In Section 3, we derive the equilibrium without banks. In Section 4, we also endow agents with a costly monitoring technology. The size of the monitoring (banking) sector is determined by the mass of projects financed by agents who use the monitoring technology. We derive a taxonomy of agents according to their decision to become lenders or borrowers and in the latter case also according to their source of finance. In Section 5, we perform a number of comparative statics in order to investigate some of the implications of our model for financial development. In the final section, we offer suggestions for further research.