عنوان انگلیسی
Neighborhood Income and Income Distribution and the Use of Cigarettes, Alcohol, and Marijuana
دانلود فوری مقاله + سفارش ترجمه 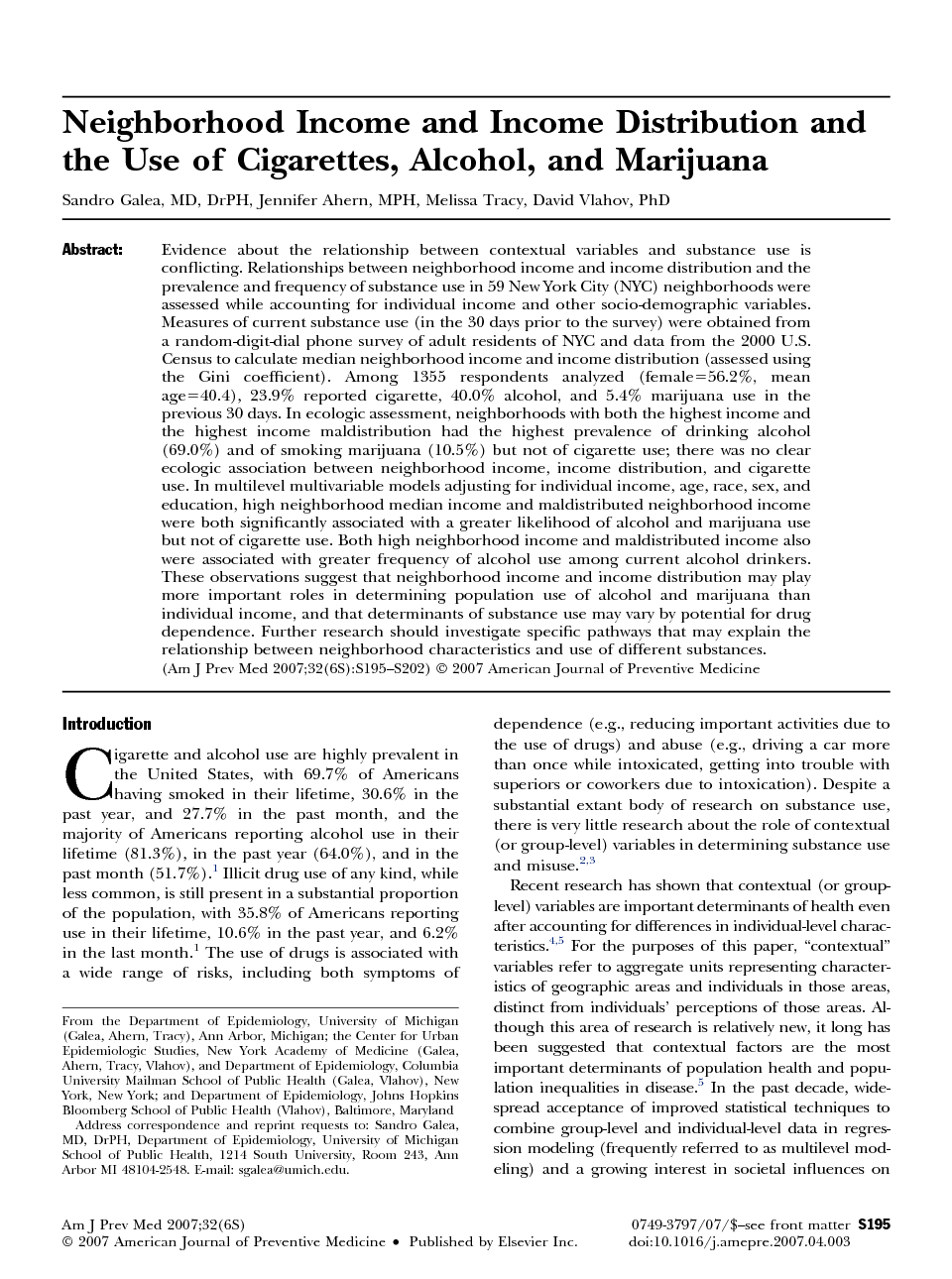 Cigarette and alcohol use are highly prevalent in the United States, with 69.7% of Americans having smoked in their lifetime, 30.6% in the past year, and 27.7% in the past month, and the majority of Americans reporting alcohol use in their lifetime (81.3%), in the past year (64.0%), and in the past month (51.7%).1 Illicit drug use of any kind, while less common, is still present in a substantial proportion of the population, with 35.8% of Americans reporting use in their lifetime, 10.6% in the past year, and 6.2% in the last month.1 The use of drugs is associated with a wide range of risks, including both symptoms of dependence (e.g., reducing important activities due to the use of drugs) and abuse (e.g., driving a car more than once while intoxicated, getting into trouble with superiors or coworkers due to intoxication). Despite a substantial extant body of research on substance use, there is very little research about the role of contextual (or group-level) variables in determining substance use and misuse.2 and 3 Recent research has shown that contextual (or group-level) variables are important determinants of health even after accounting for differences in individual-level characteristics.4 and 5 For the purposes of this paper, “contextual” variables refer to aggregate units representing characteristics of geographic areas and individuals in those areas, distinct from individuals’ perceptions of those areas. Although this area of research is relatively new, it long has been suggested that contextual factors are the most important determinants of population health and population inequalities in disease.5 In the past decade, widespread acceptance of improved statistical techniques to combine group-level and individual-level data in regression modeling (frequently referred to as multilevel modeling) and a growing interest in societal influences on health have resulted in a proliferation of epidemiologic research assessing the relationships between contextual characteristics and health. Two of the contextual variables that have been subject to the most research are aggregate income and income distribution. There is ample evidence for the relationship between aggregate income and health, both in ecologic analyses and in multilevel analyses that account for individual-level income. Aggregate income has been associated with overall mortality,7 and 8 coronary heart disease,9 and respiratory disease.10 It has been postulated (although tested empirically in relatively few studies) that factors such as the limited availability and accessibility of health services, poor infrastructural conditions, and psychosocial stress may mediate the relationships between aggregate income and health.5 More controversially, income distribution has also been suggested as an important determinant of health, even after accounting for aggregate and individual-level income. Ecologic evidence has long suggested that countries with more egalitarian distribution of income have lower mortality rates.11 In the early 1990s, a series of publications spurred further interest in the role of income distribution as an area-level determinant of health.6 Recent empiric evidence suggests that inequalities in income distribution contribute to health differentials between states and may contribute to some of the racial/ethnic and socioeconomic disparities in health in the U.S.12 and 13 Other work has failed to document an association between inequalities in income distribution and health.14 The principal proponents of the hypothesized relationship between income distribution and health suggest that perceived and actual inequity, caused by discrepancies in income distribution, erode social trust and diminish the social capital that shapes societal well-being and individual health.15 and 16 There has been relatively little research that has assessed the potential relationships between contextual variables and substance use behavior among adults and most of this work has focused on neighborhood socioeconomic status. In one study, Curry et al.17 showed that community-level characteristics (e.g., residential stability, unemployment) were associated with attitudes toward smoking, although this study did not assess frequency of smoking. A subsequent study showed that people living in more economically deprived areas (including variables such as employment levels and crowding) were more likely to smoke than people living in less-deprived areas, even after accounting for individual-level socioeconomic status.18 Corroborating these findings, others have shown that living in areas with lower mean income is associated with a greater likelihood of smoking after accounting for individual-level variables.10, 19, 20 and 21 However, the number of cigarettes smoked has not been found to be associated with levels of neighborhood deprivation.21 and 22 Additionally, while some studies have suggested that heavy drinking is more prevalent in areas with high levels of neighborhood disorder (high unemployment, crime, abandoned houses),23 other studies have observed the highest levels of alcohol consumption in the least-deprived neighborhoods,24 or failed to find an association between neighborhood deprivation or disorder and alcohol consumption.21 and 25 Although there is a growing body of work assessing the relationship between neighborhood context and the use of cigarettes, alcohol, and illicit drugs among adolescents, that literature is not reviewed here since determinants of substance use may be substantially different among youth compared to adults. Only a few studies have assessed the relationship between income distribution and individual substance use among adults. One multilevel study showed that residence in neighborhoods with poorly distributed income was associated with a higher likelihood of death due to accidental drug overdose.26 Thus, the existing literature suggests that there may be a relationship between contextual variables and individual substance use behavior even after accounting for individual characteristics. However, the observation of statistically significant associations between context and use of different substances has varied between studies. The inconsistencies in findings may demonstrate that contextual characteristics affect substance use only in certain places or that drugs with different actions (e.g., stimulants vs depressants) may be expected to have different determinants. In addition, such discrepancies may be explained by differences in study design and assessed behaviors. This paper contributes to the investigation of relationships between contextual variables and substance use behavior by assessing the relationships between neighborhood-level income and income distribution and cigarette, alcohol, and marijuana use. By considering multiple substances within the same study, potential differences in the relationship of neighborhood income and income distribution with the use of different substances may be illuminated.