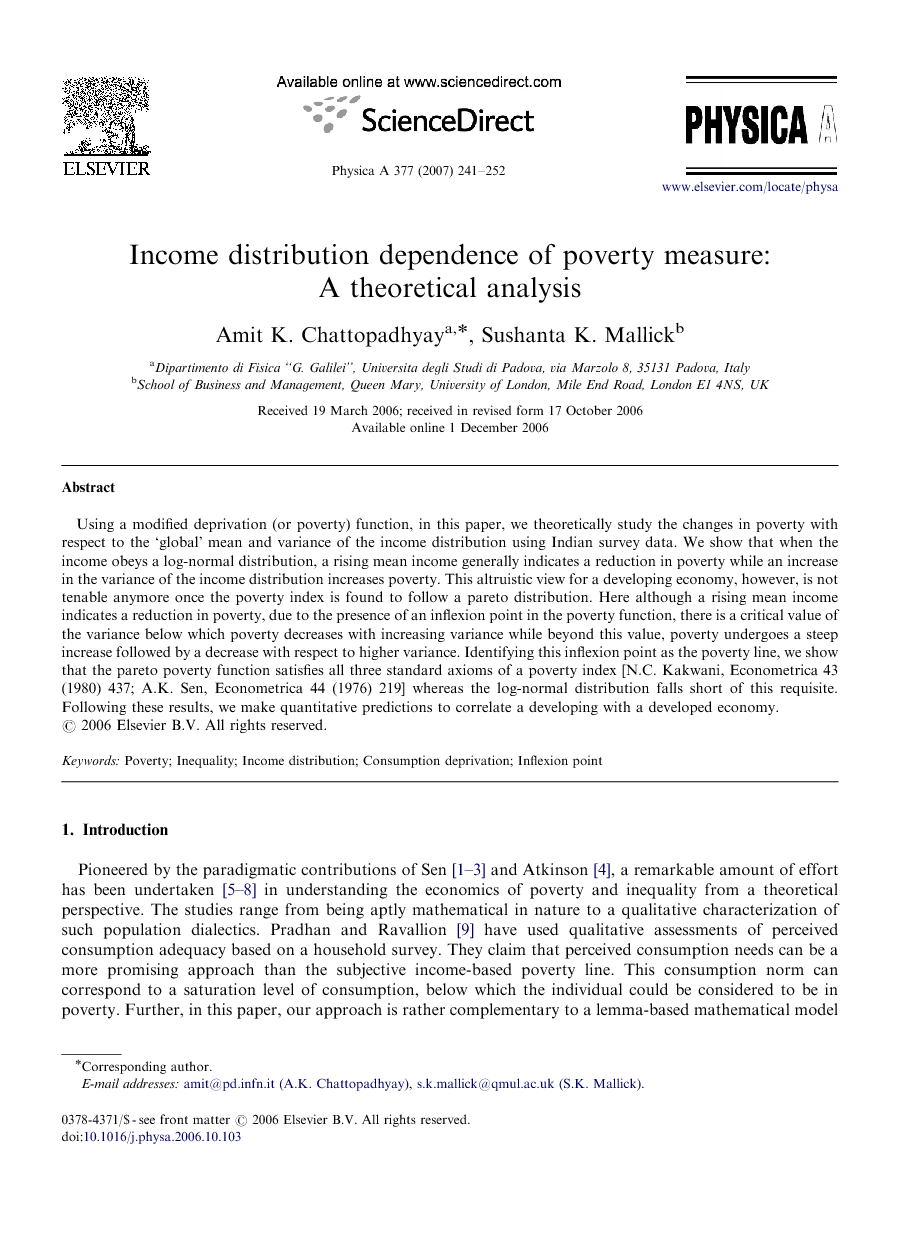 Using a modified deprivation (or poverty) function, in this paper, we theoretically study the changes in poverty with respect to the ‘global’ mean and variance of the income distribution using Indian survey data. We show that when the income obeys a log-normal distribution, a rising mean income generally indicates a reduction in poverty while an increase in the variance of the income distribution increases poverty. This altruistic view for a developing economy, however, is not tenable anymore once the poverty index is found to follow a pareto distribution. Here although a rising mean income indicates a reduction in poverty, due to the presence of an inflexion point in the poverty function, there is a critical value of the variance below which poverty decreases with increasing variance while beyond this value, poverty undergoes a steep increase followed by a decrease with respect to higher variance. Identifying this inflexion point as the poverty line, we show that the pareto poverty function satisfies all three standard axioms of a poverty index [N.C. Kakwani, Econometrica 43 (1980) 437; A.K. Sen, Econometrica 44 (1976) 219] whereas the log-normal distribution falls short of this requisite. Following these results, we make quantitative predictions to correlate a developing with a developed economy.

Pioneered by the paradigmatic contributions of Sen [1], [2] and [3] and Atkinson [4], a remarkable amount of effort has been undertaken [5], [6], [7] and [8] in understanding the economics of poverty and inequality from a theoretical perspective. The studies range from being aptly mathematical in nature to a qualitative characterization of such population dialectics. Pradhan and Ravallion [9] have used qualitative assessments of perceived consumption adequacy based on a household survey. They claim that perceived consumption needs can be a more promising approach than the subjective income-based poverty line. This consumption norm can correspond to a saturation level of consumption, below which the individual could be considered to be in poverty. Further, in this paper, our approach is rather complementary to a lemma-based mathematical model in that we use survey-based consumption data to quantify the dependence of a well-known poverty function [7] and [18] on the mean and variance of the income distribution. To this end, we use income-expenditure data from a ‘developing nation’ (India in our case) and utilize the well established technique of data fitting to define the per capita consumption as a function of income. Here the implicit assumption is that of a near equilibrium situation such that the time dependence of both income and consumption variables can be considered as transients without much effect on the asymptotic distributions. Deaton [10] has discussed the ambiguity that arises using survey data versus national accounts data for individual consumption or income levels. Although the survey consumption data seem to understate the true consumption levels, we are however using the data as a backup of our analytical results thereby restricting our claims to being qualitative in nature. Such comparisons with real data help us have approximate ideas of the values of the unknown parameters, two in our model, although the general conclusions are remarkably independent of these parameter values. The intrinsic idea of consumption deprivation (CD) helps to quantify an otherwise qualitative feature of any economy, that of poverty. This can be defined through an index, a mathematical measure, that satisfies a set of axioms [2] as discussed later in the article (monotonicity and transfer axioms). Given different shapes of income distribution data curves, a distribution sensitive measure could be appealing because it can more appropriately reflect the extent of deprivation among the poor that may be ignored by other measures of poverty commonly used in the poverty literature, such as head-count ratio and poverty-gap ratio [11]. Using the standard two-parameter-dependent definition of an income distribution, the parameters being the mean and variance of the distribution, respectively, we would consider two distributions—the log-normal distribution and the pareto distribution—to study the effects of changes in the mean and variance of the underlying income distribution on poverty. We find that for the log-normal distribution, an increase in mean income and a reduction in the variance of income distribution can reduce poverty. It also hints toward a trade-off, in that while an increase in average income reduces poverty, a simultaneous increase in income variance can escalate poverty. This result is likely to suggest that reducing income inequality should be the precondition for lowering poverty. These general results are then contrasted in the following section using a different model for the income distribution, the pareto distribution. The objective is basically to probe whether the results obtained are universal in nature and if not, then which distribution defines a better measure of poverty. Such conclusions are a remarkable modification to the general consensus which claims that for low incomes, the distribution is generally expected to be log-normal [12] or exponential [13].1 In a later section, we proceed to show that the fundamental reason for which the poverty index defined by the pareto distribution function out-competes the log-normal index is directly related to it being standardized suitably with respect to all three axioms—the monotonicity axiom, the transfer axiom and the transfer sensitivity axiom—of a poverty index measure [2], [6] and [8]. Initially propounded by Sen [2] and Kakwani [6], and later discussed lucidly in an article by Kumar et al. [8], these three axioms are supposed to be the necessary conditions for an ideal poverty index. Our calculations clearly show that although the transfer axiom is satisfied by the log-normal distribution, only the pareto distribution satisfies all three—the monotonicity and the transfer sensitivity axioms. Additionally, we show that the pareto distribution has an inherent line of poverty that can be identified with the inflexion point whereas the log-normal one fails to come up with any such self-sufficient measure. As has been shown by Atkinson [4] that a poverty line need not have a scientific basis and can be chosen administratively using certain objective criteria[8], admittedly it is no pre-requisite for a poverty index. However, a poverty line that is inbuilt in the distribution function itself has the clear advantage that instead of having to resort to arbitrary external parameters, one has a self-consistent definition of the reference line of poverty measure directly from the distribution function itself thereby making it more self-sufficient. Indeed many recent theoretical studies are directed toward a quantification of this poverty line [14] and they find a clear signature of exponential behavior above this poverty line much in line with our findings. Once again, such an indirect but quantitative check speaks in favor of the pareto distribution function.

This paper made use of a poverty function, which is different from the conventional poverty indices in the following manner: (1) the CD index does not depend on an arbitrarily chosen poverty line, (2) it depends on the observed and measurable consumption behavior of people, (3) the index satisfies the standard axioms of a poverty index. Having used such a CD function as a measure of poverty, this paper has shown analytically that for a log-normal income distribution, an increase in mean income, ceteris paribus, will decrease poverty while an increase in the variance of the income distribution, ceteris paribus, will increase poverty although somewhat contradictory information was obtained for the limiting case of earners with extremely low variance in their income distribution. In this case, poverty was found to decrease with increasing variance for a fixed mean, while when plotted against the mean (Fig. 3), it was found to initially increase and then saturate after a critical value of the mean which we could determine theoretically. These observations were later contrasted with observations made from a pareto distribution. Here we found that for very low earning groups in a developing economy, poverty initially decreases with increasing variance but beyond a critical value of the variance, it starts increasing later to decrease again. In the process, this defines all three economies characterized by individual parametric regimes. The conclusion that we derive from these joint analyzes is that the variance dependence of poverty is not unequivocally simplistic, in that one distribution (log-normal) predicts an increase in poverty with increasing variance (although the limiting σ2→0 case was somewhat qualitatively identical to zone B for the pareto distribution) while the other (pareto) shows the existence of an inflexion point in the poverty function. This means that the poverty-variance graph in a pareto distribution has a critical point, on one side (zone A) of which poverty decreases with increasing variance, while on the other side it is just the reverse. A treatment of the two distributions from an axiomatic point of view, clearly shows that the pareto poverty index satisfies all three axioms [2] whereas the log-normal index falls short of this requirement. We argue that this inherent deficiency on the part of the log-normal distribution shows itself more quantitatively in the other results that we have already narrated. In the process, we propose a mathematical foundation for the poverty line, again with respect to our preferred choice, the pareto distribution. This allows one the luxury of being able to define a poverty line without resorting to any external arbitrary parameter, this special poverty line being already defined through the distribution parameters itself. There might be other choices for a poverty line, but seldom a quantitative one. Our net contribution in this article has been to prove that a pareto distribution offers the more realistic measure of poverty in a developing economy. This is because it condones the very realistic fact that for very low income groups a slight increase in the variance only serves to decrease poverty whereas for high earning groups, greater the variation in earning greater is the probability of an escalation in poverty up to another critical point, beyond which poverty declines with any further increase in variance of wealth distribution in a society. This phase seems to reflect the case of a very developed economy, one which we identify as the supra-economic behavior. In macroeconomic sense, this phase suggests that close to an equilibrium dynamics, higher inequality could contribute to higher savings and thereby higher growth and reduced poverty. As we find, such results are not altogether extraneous with a view toward the axiomatic foundation of the distribution, pareto—or the lack of it—log-normal. As a sequel to the present work, we are presently studying the non-stationary case where both income and consumption are functions of time. The objective is to have a theory that can make quantitative predictions on the poverty of a developing economy as a function of income and time.