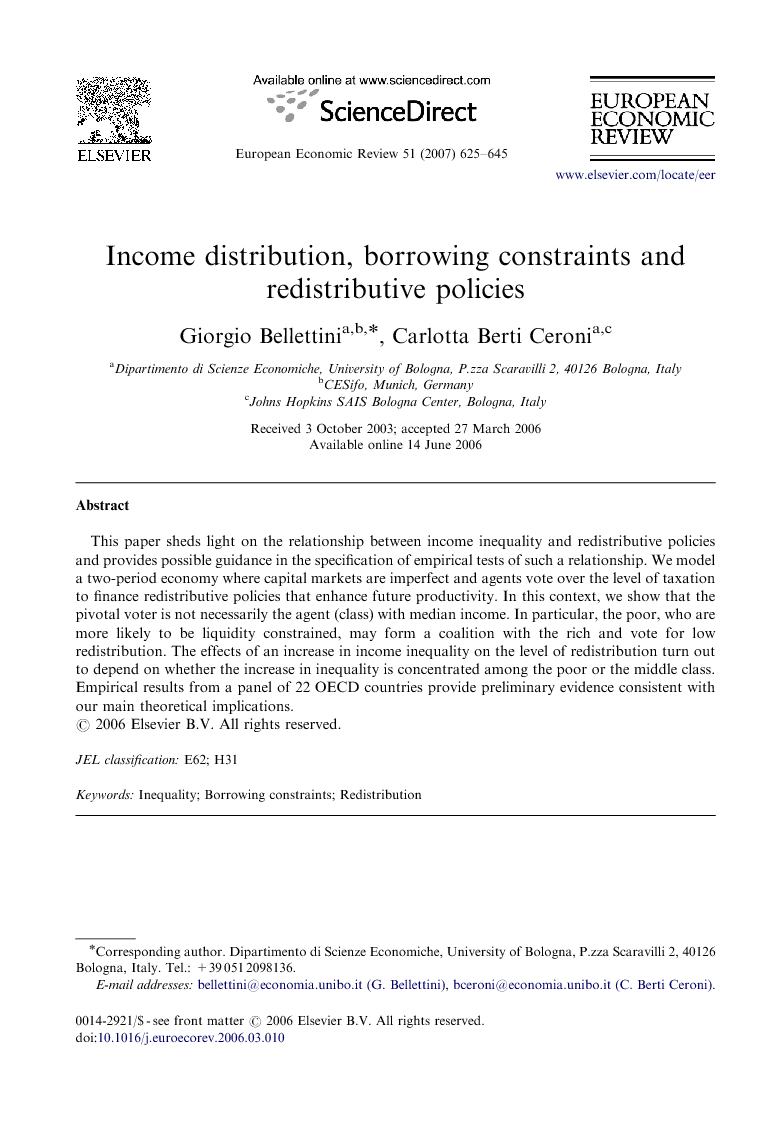 This paper sheds light on the relationship between income inequality and redistributive policies and provides possible guidance in the specification of empirical tests of such a relationship. We model a two-period economy where capital markets are imperfect and agents vote over the level of taxation to finance redistributive policies that enhance future productivity. In this context, we show that the pivotal voter is not necessarily the agent (class) with median income. In particular, the poor, who are more likely to be liquidity constrained, may form a coalition with the rich and vote for low redistribution. The effects of an increase in income inequality on the level of redistribution turn out to depend on whether the increase in inequality is concentrated among the poor or the middle class. Empirical results from a panel of 22 OECD countries provide preliminary evidence consistent with our main theoretical implications.

This paper studies the relationship between income distribution and redistributive policies in a political economy model in the presence of capital market imperfections. We show that the winning coalition depends on the extent of borrowing constraints. When these constraints are sufficiently high, a coalition of the poor and the rich vote for low redistribution. Contrary to the standard implications of the public choice analysis of the size of government, we show that in this case increasing inequality can be associated to a reduction of the political support for redistributive taxation. Our model may add useful insights to the empirical analysis of the relationship between income inequality and redistribution, which usually fail to identify a statistically significant association between these variables. Following the main implications of our model, we suggest that, in order to obtain better estimation results, it is particularly important to use pre-tax income data, to specify on which class the increase in income inequality is concentrated and to control for the existence and extent of borrowing constraints. An empirical analysis conducted along this direction using pooled cross sectional-time series data for 22 OECD countries between 1960–1995 broadly supports our main theoretical predictions. Extending our model to a multi-period framework (see Appendix B), it would be possible to shed light on the relationship between income inequality and economic growth. The intuition drawn from our two-period analysis is that an increase in income inequality concentrated among the poor will tend to decrease public expenditure on education and growth. Instead, an increase in income inequality concentrated among the middle class will tend to increase public expenditure on education and growth (as in Saint-Paul and Verdier, 1993).