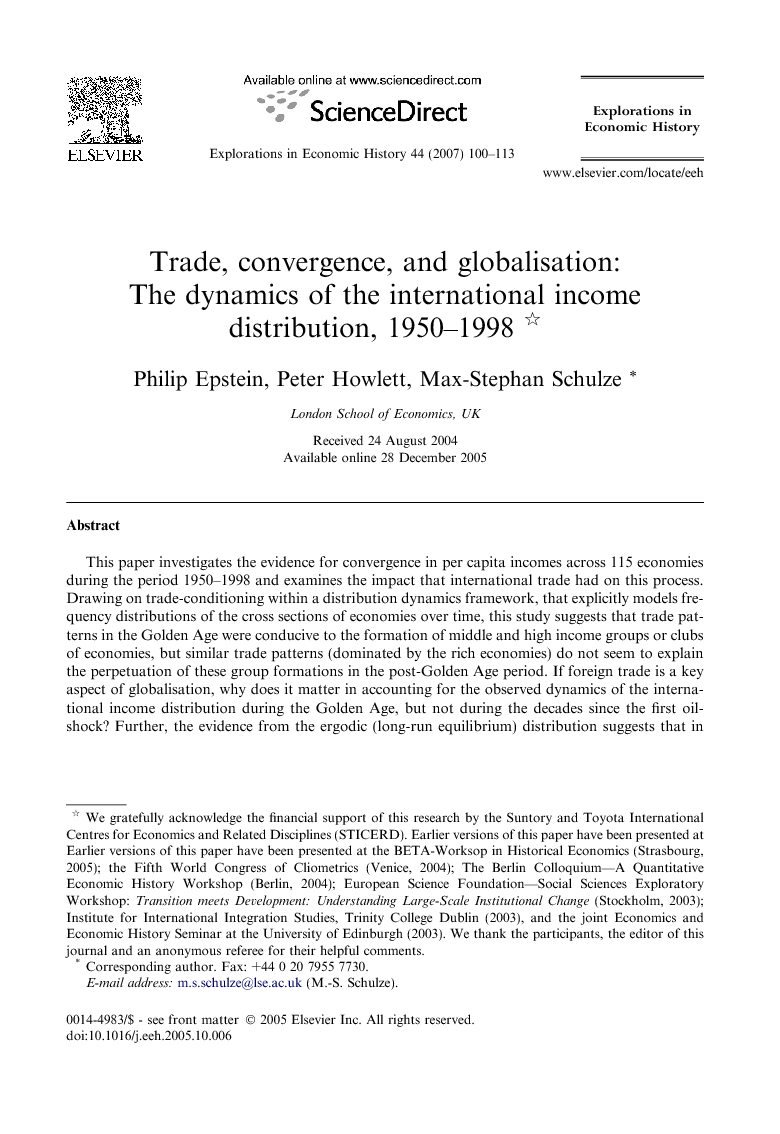 This paper investigates the evidence for convergence in per capita incomes across 115 economies during the period 1950–1998 and examines the impact that international trade had on this process. Drawing on trade-conditioning within a distribution dynamics framework, that explicitly models frequency distributions of the cross sections of economies over time, this study suggests that trade patterns in the Golden Age were conducive to the formation of middle and high income groups or clubs of economies, but similar trade patterns (dominated by the rich economies) do not seem to explain the perpetuation of these group formations in the post-Golden Age period. If foreign trade is a key aspect of globalisation, why does it matter in accounting for the observed dynamics of the international income distribution during the Golden Age, but not during the decades since the first oil-shock? Further, the evidence from the ergodic (long-run equilibrium) distribution suggests that in the long term the established trade patterns favoured the growth of the rich at the expense of the poor economies across the world.

Much of the literature on economic change in the post-1945 world is permeated by two ideas: the temporal convergence of per capita incomes across economies and the spatial advance of free trade. For many economists and historians the two are linked: the reduction of trade barriers in the post-war world ushered in a new era of globalisation and that globalisation in turn helped, indeed may have been the major engine of, convergence (for example, O‘Rourke and Williamson, 1999). If this were true then it would represent one of the most important transitions of the twentieth century. Free trade was championed by the liberal market democracies and the inducement held out to other economies was that by embracing free trade they too might reach the levels of income enjoyed by the richest nations. This broad characterisation of the literature, of course, hides important nuances and controversies. For example, the most significant growth in trade tended to be between industrialised nations trading finished and semi-finished goods with each other, as evidenced by the dramatic rise in intra-European trade during the 1950s and 1960s. Likewise, income convergence may have been limited to the richer economies and it may only have been a phenomenon of the Golden Age of 1950–1973. Initially the literature on convergence tended to characterise it as a uni-modal process whereby the steady-state equilibrium growth path would be similar for all (Barro and Sala-I-Martin, 1991, Barro and Sala-I-Martin, 1992 and Mankiw et al., 1992). However, especially in the empirical literature, this view has been largely displaced by one that characterises convergence as a multi-modal process where there are two or more convergence clubs (Durlauf and Johnson, 1995, Quah, 1996 and Temple, 1999). The problem becomes even more complex if one also accepts the view, prevalent in the economic history literature, that the post-war era can be divided into two distinct chronological periods, with possibly distinct economic characteristics: 1950–1973, known as the Golden Age, and the period after 1973, unsurprisingly, if unimaginatively, termed the post-Golden Age (Broadberry, 1996, Epstein et al., 2003, Maddison, 1995, Mills and Crafts, 2000, Temin, 1997, Temin, 2002 and Toniolo, 1998). This paper examines the evidence for convergence, and whether it was uni-modal or multi-modal, in both these periods to see if they are distinct.