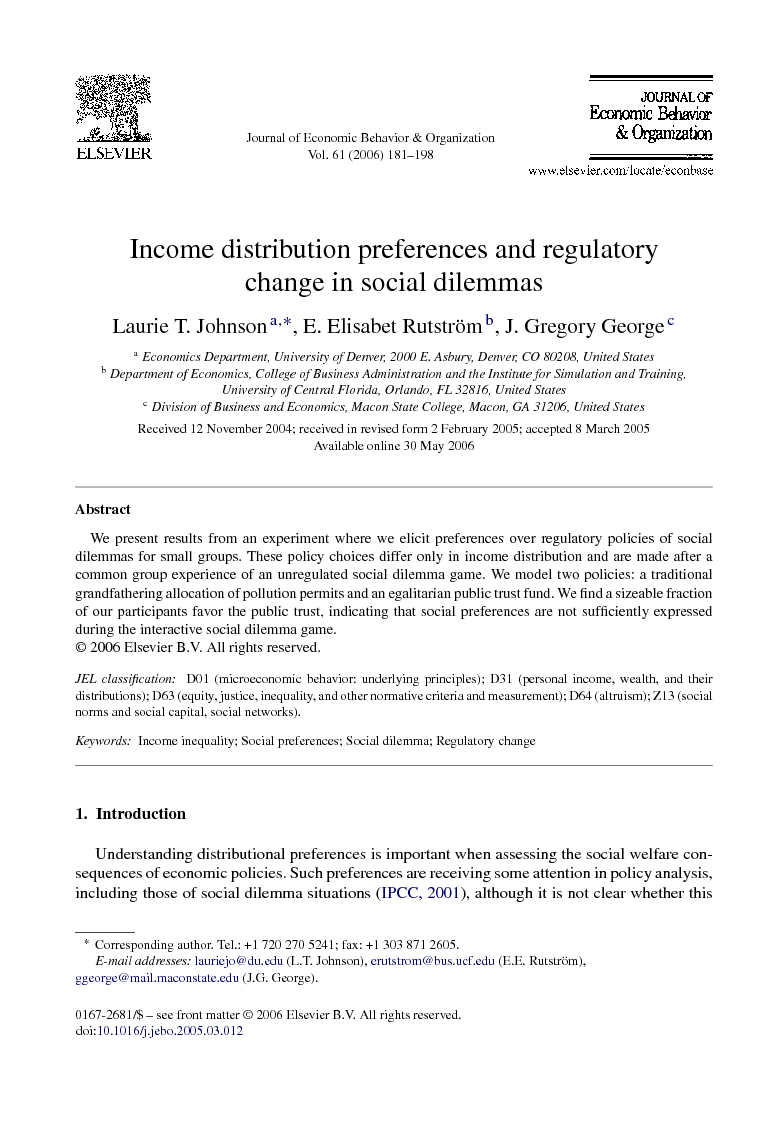 We present results from an experiment where we elicit preferences over regulatory policies of social dilemmas for small groups. These policy choices differ only in income distribution and are made after a common group experience of an unregulated social dilemma game. We model two policies: a traditional grandfathering allocation of pollution permits and an egalitarian public trust fund. We find a sizeable fraction of our participants favor the public trust, indicating that social preferences are not sufficiently expressed during the interactive social dilemma game.

We investigate the social preferences of individuals who face a regulatory change after a common interactive history of negative externalities. We model an egalitarian solution to mirror a trust fund approach to distributing emission permits and an unequal distribution to mirror a grandfathering approach. Our design reflects recent policy debates over regulatory change in social dilemma situations, where distributional issues are often a central issue in lobbying around such policies. In particular, we focus on recent policy proposals that explicitly include provisions for redistributing scarcity rents that result from the initial allocation of tradable pollution licenses. To reflect this context, we design a controlled laboratory experiment in which participants first play an interactive negative externality game and then make income distribution decisions in a separate non-interactive policy making task. We find that a sizeable portion of our participants express preferences in favor of the egalitarian policy solution. We conclude that agents have social preferences that include considerations for income distribution and reciprocity other than for self-serving reasons. The preferences expressed intensify with the cooperativeness of the individual as expressed during the unregulated stage. This is particularly the case in groups that were not successful at cooperating and is consistent with reciprocity concerns. Increased inequality of the grandfathering solution also results in an increase (although perhaps less significantly) in demand for the trust.15 Finally, we observe some preferences in favor of the trust fund even amongst individuals who were quite un-cooperative in the past, and these intensify in the groups that were more successful at cooperating. This is consistent with our hypothesis on distributional preferences. Our findings broadly support inferences about social preferences drawn elsewhere in the experimental literature. Our experiment differs significantly from others that elicit distributional preferences because the initial income positions from which redistribution choices are made are endogenously determined through a common history of interactions rather than exogenously imposed by the experimenter. Further, we elicit social preferences in the absence of influences from self-serving interests, efficiency concerns, and strategic uncertainty. These influences cannot be controlled in purely interactive settings or in less controlled settings in the field. Our design is motivated by our interest in evaluating the possibility that regulatory changes that include distributional concerns, other than those based on competing self-serving interests, have some support in existing social preference structures. We find that this is the case in our laboratory environment. These findings stand in marked contrast to those reported in Rutström and Williams (2000) who also ask whether past actions have an effect on distributional choices. Nevertheless, they employed a context where subjects did not have a common and interdependent history. Their subjects went through a stage one task individually and then made distributional choices in a stage two. Stage two efficiency, as captured by the aggregate group earnings, depended on the combination of independent actions taken in stage one by all group members. Despite the link to history that was provided through the efficiency effect, they found choices to be consistent with a pure self-regard. These contrasting results indicate that distributional and reciprocal preferences may depend on perceptions of a common past where the nature of players as cooperative or not is revealed in a transparent way. Our findings provide a step toward a better understanding of the preferences underlying the economic and political process of policy design and open the way for future research to address other issues. Such issues include the trade off between self-interest and distributional preferences for the political actors, the differences in the characteristics of interested parties such as economic size, and issues of political influence. The experimental design introduced here, where the initial income positions are endogenously generated, provides a promising framework for continued research on the preferences underlying the political process of regulatory change.