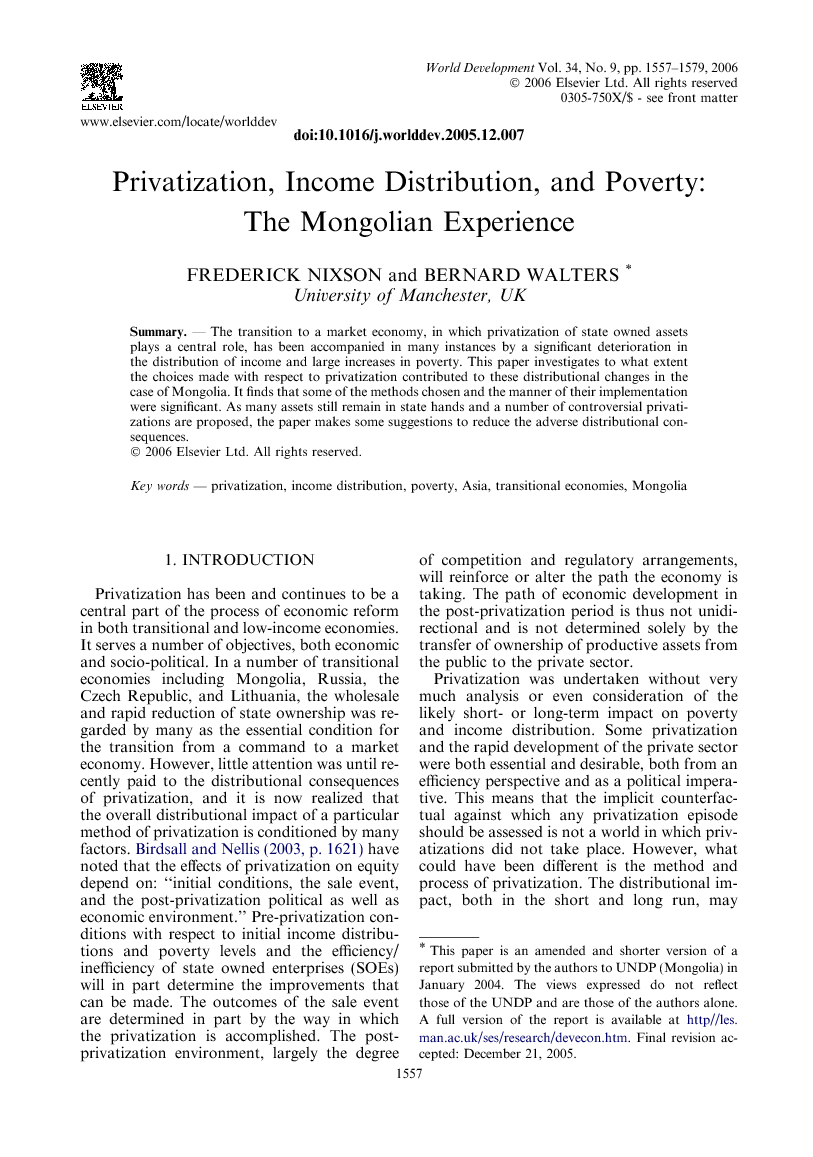 The transition to a market economy, in which privatization of state owned assets plays a central role, has been accompanied in many instances by a significant deterioration in the distribution of income and large increases in poverty. This paper investigates to what extent the choices made with respect to privatization contributed to these distributional changes in the case of Mongolia. It finds that some of the methods chosen and the manner of their implementation were significant. As many assets still remain in state hands and a number of controversial privatizations are proposed, the paper makes some suggestions to reduce the adverse distributional consequences.

Privatization has been and continues to be a central part of the process of economic reform in both transitional and low-income economies. It serves a number of objectives, both economic and socio-political. In a number of transitional economies including Mongolia, Russia, the Czech Republic, and Lithuania, the wholesale and rapid reduction of state ownership was regarded by many as the essential condition for the transition from a command to a market economy. However, little attention was until recently paid to the distributional consequences of privatization, and it is now realized that the overall distributional impact of a particular method of privatization is conditioned by many factors. Birdsall and Nellis (2003, p. 1621) have noted that the effects of privatization on equity depend on: “initial conditions, the sale event, and the post-privatization political as well as economic environment.” Pre-privatization conditions with respect to initial income distributions and poverty levels and the efficiency/inefficiency of state owned enterprises (SOEs) will in part determine the improvements that can be made. The outcomes of the sale event are determined in part by the way in which the privatization is accomplished. The post-privatization environment, largely the degree of competition and regulatory arrangements, will reinforce or alter the path the economy is taking. The path of economic development in the post-privatization period is thus not unidirectional and is not determined solely by the transfer of ownership of productive assets from the public to the private sector. Privatization was undertaken without very much analysis or even consideration of the likely short- or long-term impact on poverty and income distribution. Some privatization and the rapid development of the private sector were both essential and desirable, both from an efficiency perspective and as a political imperative. This means that the implicit counterfactual against which any privatization episode should be assessed is not a world in which privatizations did not take place. However, what could have been different is the method and process of privatization. The distributional impact, both in the short and long run, may depend crucially on the method or methods actually chosen and the speed with which they are implemented. In addition, the point in time at which we evaluate the impact of privatization becomes of crucial importance if it is argued that privatization is positively correlated with improved macroeconomic performance and higher real GDP growth, which, other things being equal, will raise incomes and employment and reduce poverty (Barnett, 2000). In Mongolia, privatization was a major part of the process of the transition to a market economy. Stabilization and structural adjustment policies, involving, inter alia, the liberalization and deregulation of the economy, along with external factors (the collapse of the Former Soviet Union (FSU) and the dissolution of the Council for Mutual Economic Assistance (CMEA)) have all played a major role in determining the nature and characteristics of the post-1990 transition in Mongolia. This paper focuses on the privatization event and investigates to what extent and in what ways privatization, either directly or indirectly contributed to increases in poverty and inequality.1 The paper also attempts to identify the lessons that can be drawn from past experience, which may guide future privatizations. Many of the most valuable assets still remain in the hands of the State and a number of controversial privatizations in the areas of healthcare, schools and hospitals, infrastructure and the ownership of land are proposed. The balance of opinion in Mongolia in the early-1990s favored the “shock therapy” approach to economic reform in an attempt to destroy old, and construct new institutions as rapidly as possible. Privatization was clearly of strategic importance in this respect, leading as it did to an irreversible shift in productive assets from the state to the private sector, with the intention of creating a pluralist, liberal, capitalist, market economy. The shock therapy approach to economic reform was broadly encouraged by the International Monetary Fund and the World Bank, and was consistent with the interests of key sections of the Mongolian nomenklatura. New vested interests were generated, based on the new (or potential) distribution of productive assets. The fact that this process was not necessarily in the interests of the great majority of Mongolians is in part explained by the power of the coalitions formed, itself in part a function of lack of transparency (the work of Olson, 1971 and Stiglitz, 1998 is suggestive in this respect). For a fuller discussion of these issues, see Nixson, Suvd, Luvsandorj, and Walters (2000). In 2004, more than 10 years after it began its transition to the market, Mongolia’s per capita income was estimated to be US$462 (constant 2000 US$), ranking Mongolia among the poorest countries in the world (World Development Indicators, 2005). Its economy was characterized by heavy concentration on the production and export of a narrow range of commodities (copper, cashmere, and gold) and aid dependence. Its transition to a market economy has also been accompanied by significant increases in poverty and inequality in the distribution of income. Mongolia now exhibits the classic characteristics of a low-income, less developed country.2 The paper is structured as follows. Section 2 provides an overview of GDP growth and the rise in poverty and inequality since 1990. Section 3 considers the experience of privatization in other transitional economies and provides a more formal discussion of the different channels through which a privatization “event” may impact on poverty and income distribution. Section 4 considers in more detail the privatization process in Mongolia looking in particular at the privatizations of livestock, urban apartments, and small and medium sized enterprises (SMEs). Section 5 presents an analysis of the distributional consequences based on the results of four sample surveys carried out in Mongolia in 2003. Section 6 reports conclusions and policy implications.

This paper is a first attempt to evaluate the impact of privatization on poverty and inequality in a Central Asian transitional economy. It examines the extent to which privatization has contributed to the large rises in poverty and inequality that have characterized the transition to the market in Mongolia since 1990 and highlights the lessons that can be learnt that might allow future privatizations to proceed with a lower distributional cost. A number of important prior considerations condition the analysis. First, privatization was partly a political decision to which successive governments have remained committed. This means that the implicit counterfactual against which the impact of privatization is measured cannot be a world with no privatization but rather one in which different methods and processes of privatization are applied. Second, privatization narrowly defined cannot be separated from other changes, such as stabilization and structural adjustment, which are intrinsically associated with the transition. Privatization took place in the context of severe macroeconomic disturbances, which are independently responsible for a considerable part of the rise in poverty and inequality. The overall effect was a precipitous decline in the standard of living of the average Mongolian. The levels of poverty and inequality rose dramatically in the early period of transition and have remained at very high levels over the 15 years of the transition to a market economy. Although we cannot precisely quantify the impact of privatization on rising poverty and inequality, it is nevertheless our view that the limited quantitative evidence and the more extensive qualitative evidence point unambiguously toward privatization having a significant effect with respect to rising inequality and, although perhaps to a lesser extent, to rising poverty. The paper discusses the theoretical literature and the international evidence, which points unambiguously to income inequality rising with the transfer of assets from the state to the private sector. In addition, both the international and Mongolian evidence strongly suggests that the precise manner in which privatization is carried out has significant effects on inequality and poverty. Mass privatization through the distribution of vouchers seems to be in principle equitable, but in practice it has generated large inequalities, as the discussion of the urban apartment and livestock privatization indicates. In the Mongolian case there seems to have been a lack of transparency, insufficient public information, and education to allow ordinary Mongolians to make informed decisions about the use of their vouchers.