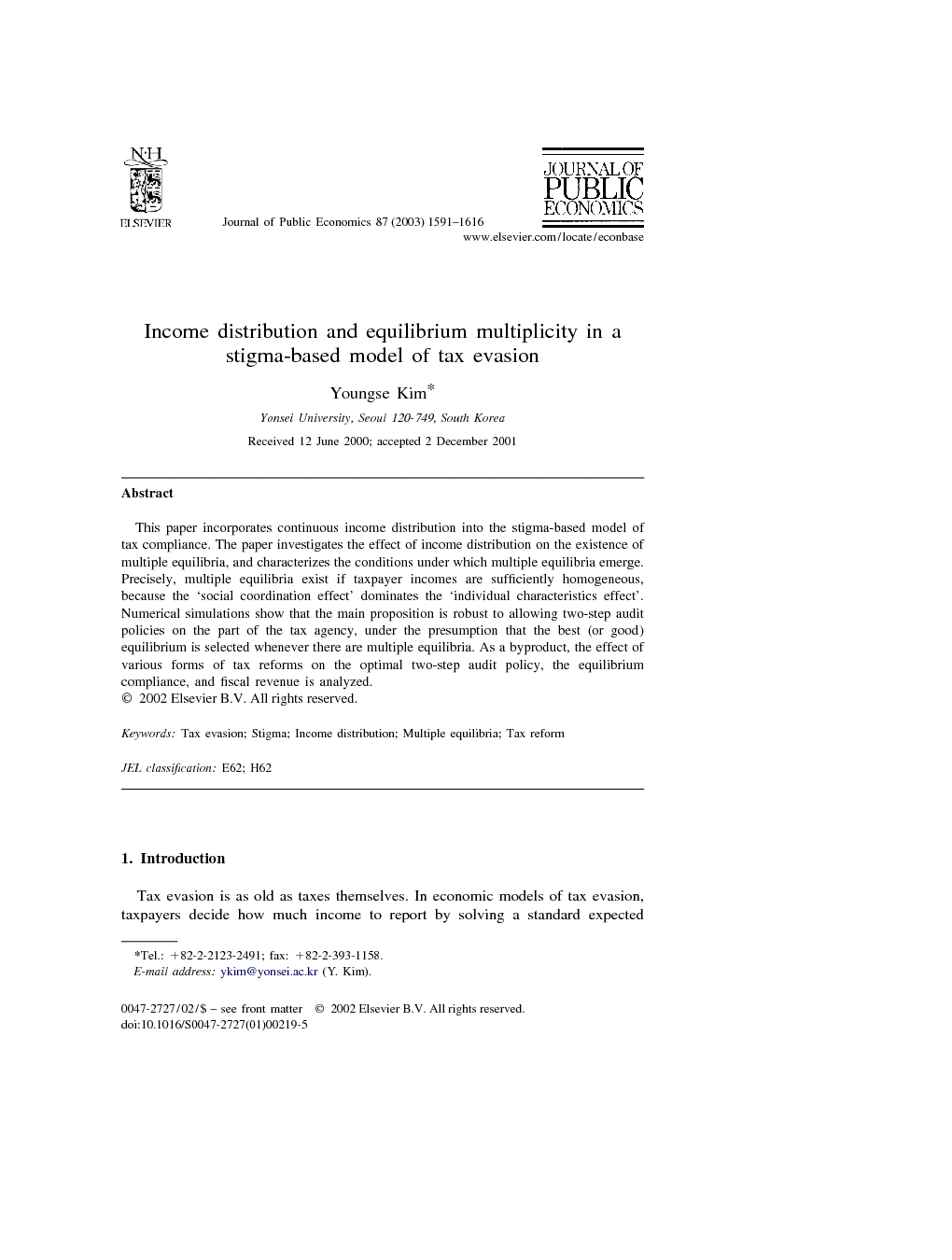 This paper incorporates continuous income distribution into the stigma-based model of tax compliance. The paper investigates the effect of income distribution on the existence of multiple equilibria, and characterizes the conditions under which multiple equilibria emerge. Precisely, multiple equilibria exist if taxpayer incomes are sufficiently homogeneous, because the ‘social coordination effect’ dominates the ‘individual characteristics effect’. Numerical simulations show that the main proposition is robust to allowing two-step audit policies on the part of the tax agency, under the presumption that the best (or good) equilibrium is selected whenever there are multiple equilibria. As a byproduct, the effect of various forms of tax reforms on the optimal two-step audit policy, the equilibrium compliance, and fiscal revenue is analyzed.

I conclude the paper with some suggestions for future research. Perhaps the assumption one would most like to weaken is the inelasticity of labor supply. However, this assumption is partly motivated by existing empirical findings (Auerbach and Slemrod, 1997) that much of the movement in the reported income of high-income households represents the shifting of income and not income creation, such as additional labor supply. Another suggestion for future research may be a fusion of two types of stigma-based models, including both tax evasion and welfare transfer. The current paper focuses on taxpayers’ evading decision, while the literature on welfare stigma, such as Moffitt (1983), Besley and Coate (1992), and Lindbeck et al. (1999), assumes away the possibility of evasion. A more concrete suggestion for future research is related to equilibrium selection among multiple equilibria. In order to evaluate the tax reform in the presence of multiple equilibria, it is assumed that, as the structure of the economy changes, the equilibrium moves smoothly by an ad hoc adjustment dynamic process. If one is concerned more about the equilibrium selection problem, an incomplete information approach such as Morris and Shin (2001) can be the proper path to follow. In a possible modification, taxpayers observe their own cost of stigma and the history of the levels of aggregate corruption. The distribution of individual characteristics evolves through a random process. Applying the iterative elimination of strictly dominated strategies, one can characterize the Bayesian Nash equilibrium with a unique cutoff property. Kim (2001) pursues this line of research to explain the ambiguity and uncertainty often observed in tax auditing policies.