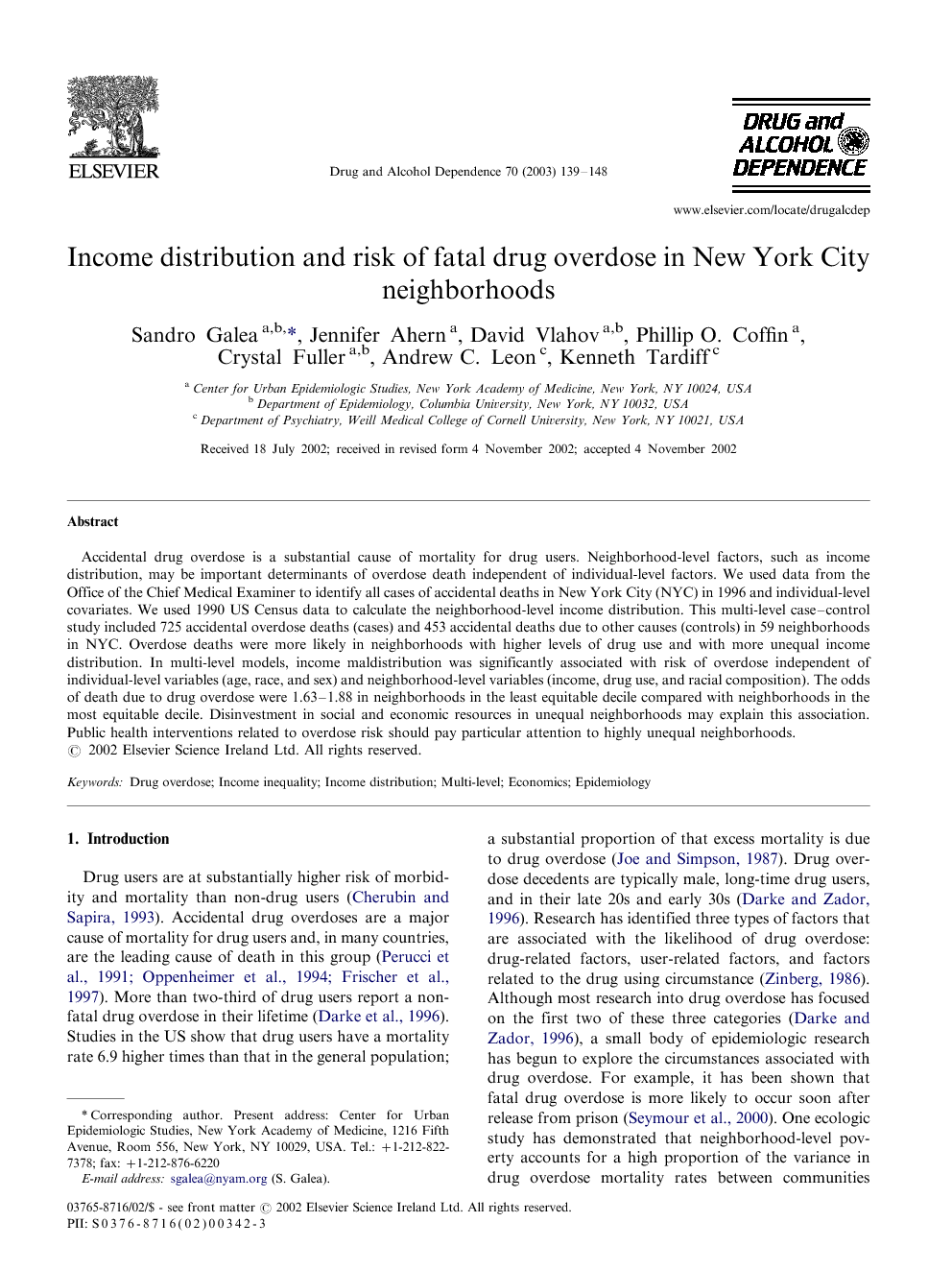 Accidental drug overdose is a substantial cause of mortality for drug users. Neighborhood-level factors, such as income distribution, may be important determinants of overdose death independent of individual-level factors. We used data from the Office of the Chief Medical Examiner to identify all cases of accidental deaths in New York City (NYC) in 1996 and individual-level covariates. We used 1990 US Census data to calculate the neighborhood-level income distribution. This multi-level case–control study included 725 accidental overdose deaths (cases) and 453 accidental deaths due to other causes (controls) in 59 neighborhoods in NYC. Overdose deaths were more likely in neighborhoods with higher levels of drug use and with more unequal income distribution. In multi-level models, income maldistribution was significantly associated with risk of overdose independent of individual-level variables (age, race, and sex) and neighborhood-level variables (income, drug use, and racial composition). The odds of death due to drug overdose were 1.63–1.88 in neighborhoods in the least equitable decile compared with neighborhoods in the most equitable decile. Disinvestment in social and economic resources in unequal neighborhoods may explain this association. Public health interventions related to overdose risk should pay particular attention to highly unequal neighborhoods.

Drug users are at substantially higher risk of morbidity and mortality than non-drug users (Cherubin and Sapira, 1993). Accidental drug overdoses are a major cause of mortality for drug users and, in many countries, are the leading cause of death in this group (Perucci et al., 1991, Oppenheimer et al., 1994 and Frischer et al., 1997). More than two-third of drug users report a non-fatal drug overdose in their lifetime (Darke et al., 1996). Studies in the US show that drug users have a mortality rate 6.9 higher times than that in the general population; a substantial proportion of that excess mortality is due to drug overdose (Joe and Simpson, 1987). Drug overdose decedents are typically male, long-time drug users, and in their late 20s and early 30s (Darke and Zador, 1996). Research has identified three types of factors that are associated with the likelihood of drug overdose: drug-related factors, user-related factors, and factors related to the drug using circumstance (Zinberg, 1986). Although most research into drug overdose has focused on the first two of these three categories (Darke and Zador, 1996), a small body of epidemiologic research has begun to explore the circumstances associated with drug overdose. For example, it has been shown that fatal drug overdose is more likely to occur soon after release from prison (Seymour et al., 2000). One ecologic study has demonstrated that neighborhood-level poverty accounts for a high proportion of the variance in drug overdose mortality rates between communities (Marzuk et al., 1997). This work suggests that contextual factors merit exploration as potential determinants of drug overdose. In other areas, recent research has shown that neighborhood characteristics are important determinants of health even after accounting for differences in individual-level factors (Diez-Roux, 2001 and Pickett and Pearl, 2001). For example, neighborhood socioeconomic status has been associated with mortality and coronary heart disease (Yen and Kaplan, 1999 and Diez-Roux et al., 1997) and neighborhood conditions with physical function (Balfour and Kaplan, 2002). This research has led to a greater public health focus on identifying contextual or area-level factors that may shape the more familiar, proximal individual determinants of health (Power and Matthews, 1997 and Kaplan, 1999). One of the area-level factors that has been subject to focused research and debate in the past decade is income distribution. Ecologic evidence has long suggested that countries with more egalitarian distribution of income have lower mortality rates (Rodgers, 1979). In the early 1990s, a series of publications spurred further interest in the role of income distribution as an area-level determinant of health (Wilkinson, 1992). Recent empiric evidence, although controversial, suggests that inequalities in income distribution contribute to health differentials between states and may contribute to some of the racial and socioeconomic disparities in health in the US (Lynch et al., 2001 and Ross et al., 2000). The principal proponents of the hypothesized relation between income distribution and health suggest that perceived and actual inequities caused by the discrepancies in income distribution erode social trust and diminish the social capital that shapes societal wellbeing and individual health (Kawachi et al., 1997). Social capital is frequently conceptualized as the stock of social trust, norms, and networks that people in a particular area draw upon to solve common problems (Kawachi, 1999). Areas with more equitable income distribution and high social capital may be more likely to activate efficient systems that deal with emergent medical conditions or to care for those in acute distress. Income distribution at the neighborhood level may be particularly important in the context of fatal drug overdose. For example, although drug overdoses are more likely to occur when an individual is using drugs in the company of others (Walsh, 1991 and Zador et al., 1996), it has been shown that other persons present during a drug overdose seek medical help in fewer than half of all fatal overdoses (Manning et al., 1983 and Zador et al., 1996). This reluctance to call for help may be based on fear of criminal prosecution or a general mistrust of authority suggesting erosion of social capital. It is then plausible that the risk of drug overdose may be higher in neighborhoods with more unequal income distribution and low social capital. Since accidental overdose fatalities are a subset of accidental deaths, we tested this hypothesis in a multi-level case–control study using data from New York City (NYC) for 1996. We hypothesized, a priori, that accidental mortality in neighborhoods with more unequal income distribution was more likely to be caused by drug overdose than by other accidental causes.