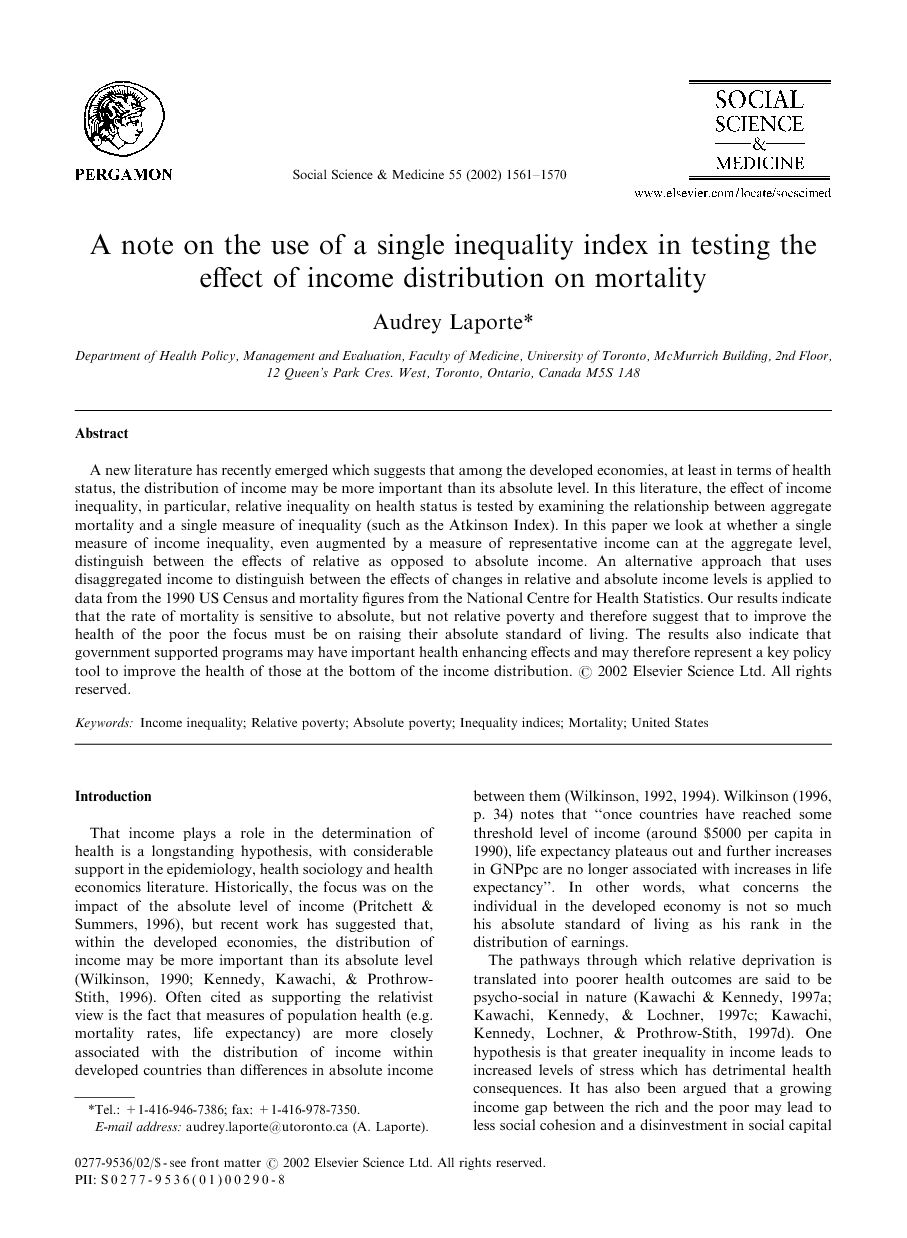 A new literature has recently emerged which suggests that among the developed economies, at least in terms of health status, the distribution of income may be more important than its absolute level. In this literature, the effect of income inequality, in particular, relative inequality on health status is tested by examining the relationship between aggregate mortality and a single measure of inequality (such as the Atkinson Index). In this paper we look at whether a single measure of income inequality, even augmented by a measure of representative income can at the aggregate level, distinguish between the effects of relative as opposed to absolute income. An alternative approach that uses disaggregated income to distinguish between the effects of changes in relative and absolute income levels is applied to data from the 1990 US Census and mortality figures from the National Centre for Health Statistics. Our results indicate that the rate of mortality is sensitive to absolute, but not relative poverty and therefore suggest that to improve the health of the poor the focus must be on raising their absolute standard of living. The results also indicate that government supported programs may have important health enhancing effects and may therefore represent a key policy tool to improve the health of those at the bottom of the income distribution.

In this paper we focussed on one, influential, approach which has been adopted in the population health literature to testing the effect of relative income on aggregate mortality. That approach, as represented in the work of Kawachi and Kennedy (1997b) using state-level American data, involves regressing aggregate age-adjusted mortality on variables representing the overall level of income and an index of inequality in the distribution of income. The most common conclusion from that entire strand of literature is that inequality in distribution has an effect on mortality independent of the level of income. Our results, in this paper, cast doubt on the relative inequality conclusions. They suggest that the reason the Atkinson inequality index in particular had such strong explanatory power was that it was picking up the effect of low income, in the absolute sense, on mortality. By disaggregating the income distribution variable we were able to show that the part of the income distribution that matters was the part at the bottom. Our results strongly suggest that, at least in as far as mortality is a target of income distribution policy, policies should focus on the absolute level of income of those at the bottom of the distribution. It might be argued that, for policy purposes, there is no significant difference between the effect on mortality of changes in absolute and relative income, since reducing inequality by making transfers to the poor will reduce mortality. The key difference between the effects of the two types of income changes is probably the magnitude of the transfers that would be required in order that a certain target reduction in mortality be achieved. If changes in relative income affect mortality, a transfer from the rich to the poor has a double effect—it reduces inequality by raising the income of the poor in an absolute sense, and it also reduces relative inequality by both lifting the bottom and lowering the top of the distribution. If relative inequality does not affect mortality, only the increase in the absolute income of the poor has an effect on mortality, there is no additional relative effect, so achieving a target reduction in mortality would require a larger transfer. In terms of research strategies, our results suggest that, for studies at the aggregate level, single measures of inequality are not appropriate devices for analyzing the effects of the gradient in income on mortality. Our results also suggest that these measures may not be fine enough to pick out certain important effects. We found that the coefficient on the proportion of the population in the 12 to 14 thousand dollar income range was negative and significant, a result which may be due to the fact that it is in this income range that many American social and transfer programs cut in. Kawachi and Kennedy (1997b) mention that their conclusions are invariant to whether pre- or post-tax and transfer income were used in generating their inequality measures. Their finding, if it held up under further research, would suggest that transfer programs were generally ineffective in reducing mortality at the bottom end of the income distribution. Our results suggest that further research in this area is warranted. It may well be that those income transfers are having a significant effect on mortality, and that their effect is lost in the process of reducing income inequality to a single number. Further research into the effect of transfers taken as a whole would seem to be indicated.