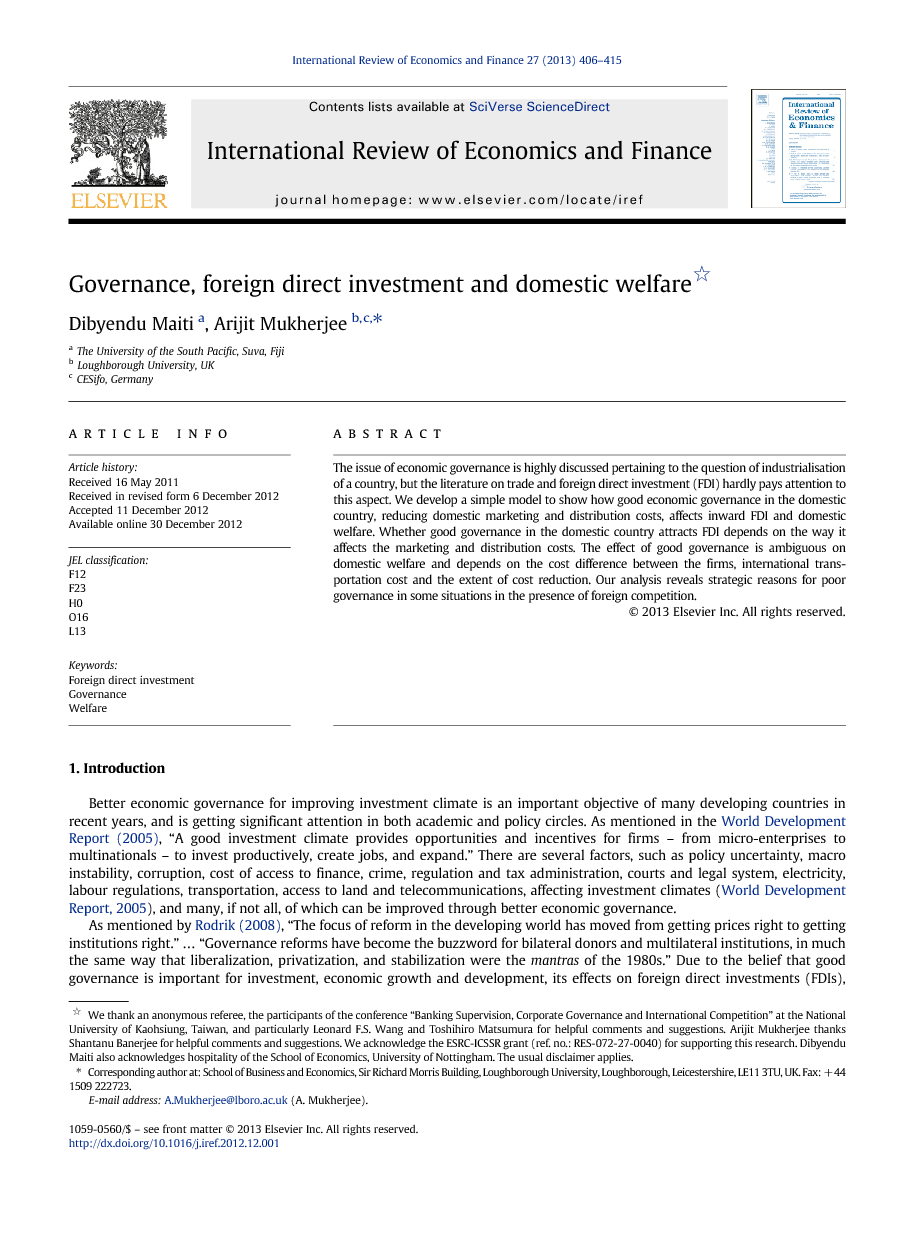 The issue of economic governance is highly discussed pertaining to the question of industrialisation of a country, but the literature on trade and foreign direct investment (FDI) hardly pays attention to this aspect. We develop a simple model to show how good economic governance in the domestic country, reducing domestic marketing and distribution costs, affects inward FDI and domestic welfare. Whether good governance in the domestic country attracts FDI depends on the way it affects the marketing and distribution costs. The effect of good governance is ambiguous on domestic welfare and depends on the cost difference between the firms, international transportation cost and the extent of cost reduction. Our analysis reveals strategic reasons for poor governance in some situations in the presence of foreign competition.

It is a general consensus that good economic governance encourages the firms – from micro-enterprises to multinationals – to invest more due to a better investment climate. While several branches of economics literature widely discussed the implications of economic governance for the development of a country, the literature on international trade and FDI did not pay much attention to this aspect. In a simple model, we show the implications of good economic governance on the incentive for inward FDI and domestic welfare. We show that the effects on FDI depend on the way good governance affects the per-unit domestic transportation costs and labour productivities. Further, whether good governance increases domestic welfare is ambiguous and depends on the factors such as the per-unit marketing and distribution cost difference between the firms, international transportation cost and the extent of marketing and distribution cost reduction. Thus, our analysis shows that the usual perception, i.e., good governance attracts FDI and also increases domestic welfare, is not obvious, and there may be strategic reasons for maintaining lower level of economic governance. Whether good governance affects per-unit marketing and distribution costs by the same amount or by the same proportion is important for our results. It is worth pointing out that this type of effects prevails in other aspects of the economic analysis with asymmetric cost of firms. For example, whether the governments impose unit taxes/subsidies, which affect the marginal costs by the same amount, or they impose ad-valorem taxes/subsidies, which affect the marginal costs by the same proportion, may have significant implications for trade and industrial policies. Hence, the basic mechanism of our analysis has broader applicability than the context of this paper.