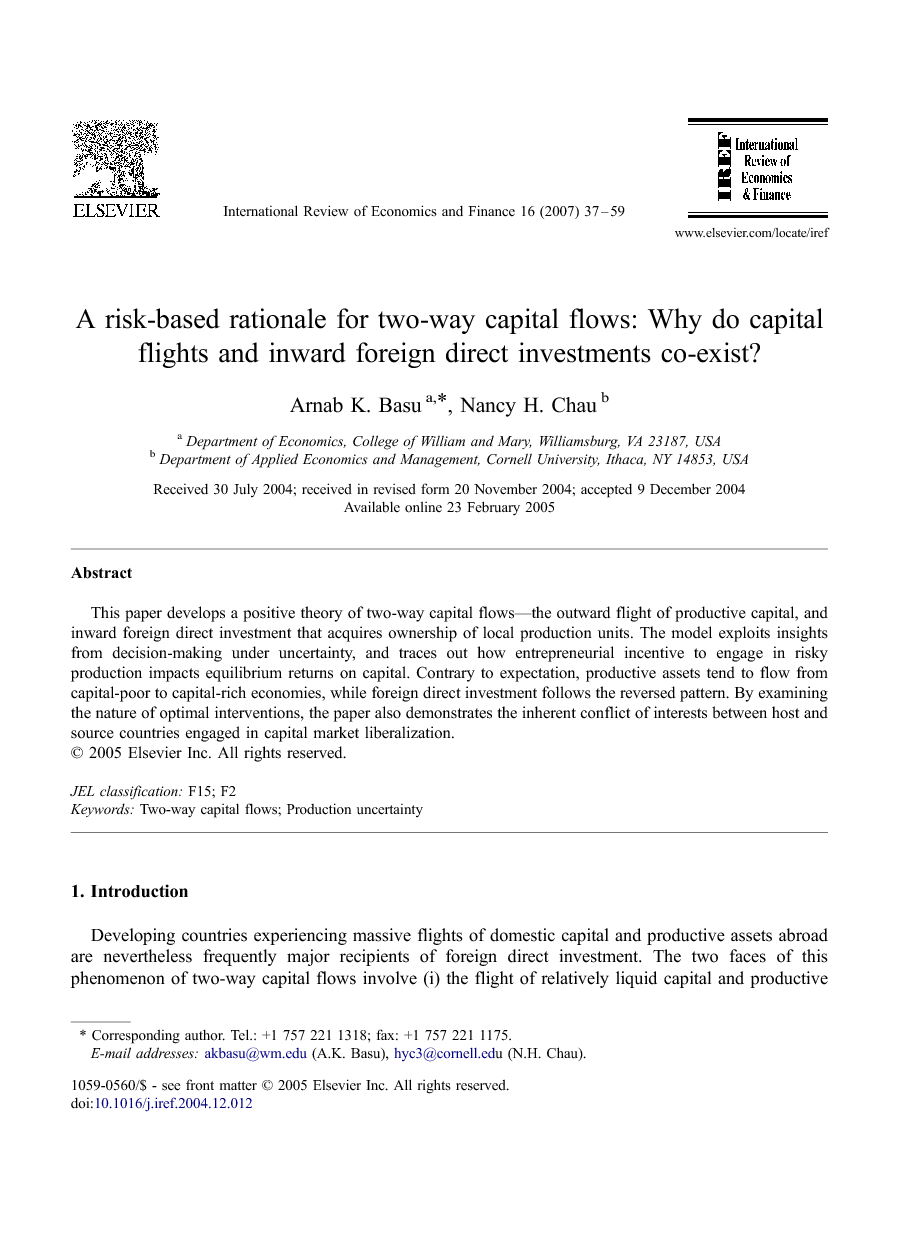 This paper develops a positive theory of two-way capital flows—the outward flight of productive capital, and inward foreign direct investment that acquires ownership of local production units. The model exploits insights from decision-making under uncertainty, and traces out how entrepreneurial incentive to engage in risky production impacts equilibrium returns on capital. Contrary to expectation, productive assets tend to flow from capital-poor to capital-rich economies, while foreign direct investment follows the reversed pattern. By examining the nature of optimal interventions, the paper also demonstrates the inherent conflict of interests between host and source countries engaged in capital market liberalization.

The results in this paper highlight the implications of capital market liberalization and underscores the fact that under production uncertainty and incomplete risk markets, capital flight takes place from countries that are poorly endowed with capital to those that are relatively capital-rich. The basic framework exploits the insights from entrepreneurial decision making under production uncertainty in the manufacturing sector, and the general equilibrium consequence of risky production on the relative rates of returns to capital in capital-poor and capital-rich economies. The model shows that the rationale behind two-way capital flow is surprisingly simple—that the risk-bearing fee attached to risky production shows up in the form of a price-unit cost margin. In the presence of preferences that exhibit decreasing absolute risk aversion, capital-poor entrepreneurs are willing to devote a smaller share of their revenue to pay for productive inputs. The resulting downward pressure on the derived demand for capital inputs implies that other things being equal, the flight of capital originates from capital-poor countries to capital-rich countries. By the same token, the higher price-cost margin in the South induces foreign direct investment flows from the North to the South, as entrepreneurs in capital-rich economies are more likely to undertake risky production activities. In terms of welfare, the investment policies of the two countries differ considerably. In particular, whereas the revenue motive constitute the rationale behind Southern taxation of both capital inflow as well as capital outflow, the welfare maximization policy of the North actually implies that Northern investment in the South should be encouraged via subsidies, rather than deterred. These findings shed new light on the potential conflict of interests between capital-rich and capital-poor economies in the context of capital market liberalization.