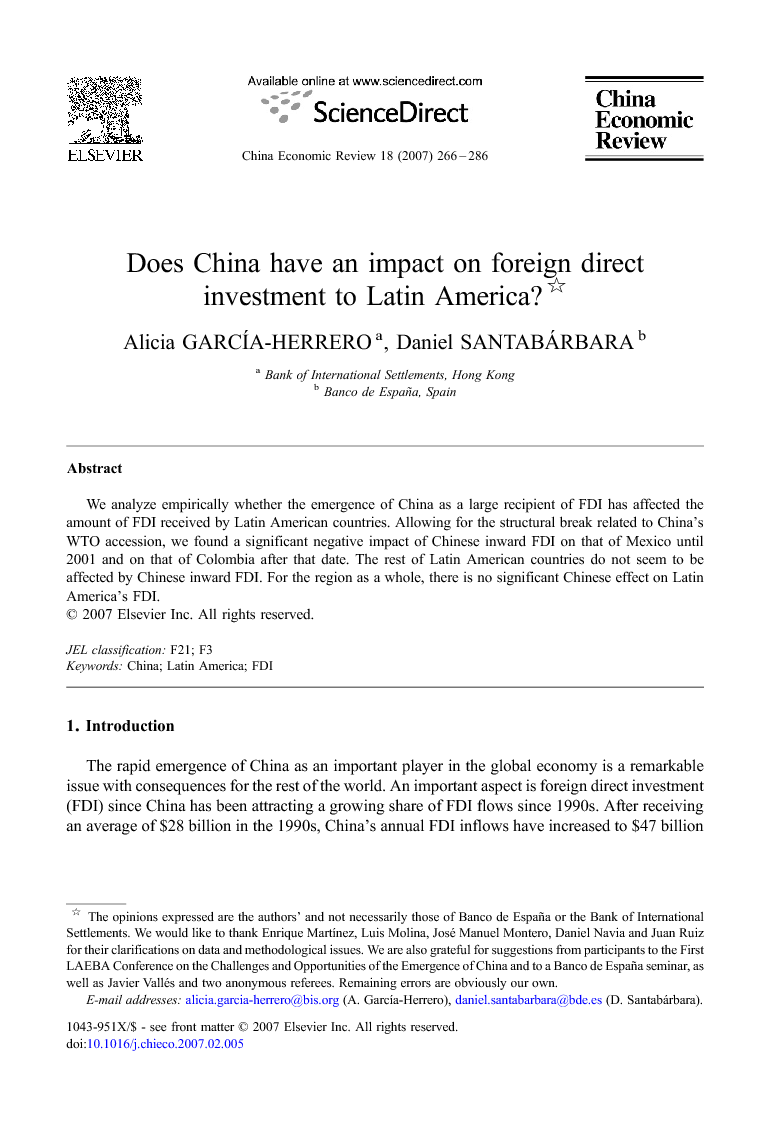 We analyze empirically whether the emergence of China as a large recipient of FDI has affected the amount of FDI received by Latin American countries. Allowing for the structural break related to China's WTO accession, we found a significant negative impact of Chinese inward FDI on that of Mexico until 2001 and on that of Colombia after that date. The rest of Latin American countries do not seem to be affected by Chinese inward FDI. For the region as a whole, there is no significant Chinese effect on Latin America’s FDI.

In this paper we investigate how Chinese inward FDI affects FDI flows to Latin American countries. When taking into account the structural break which occurred with China's WTO entry in 2001, we do find evidence of FDI dislocation from Latin American countries to China. More specifically, we report a significant negative impact of Chinese inward FDI on that of Mexico until 2001 and on that of Colombia thereafter. Finally, the rest of Latin America countries are not affected. In addition, no effect is found for the whole sample period. All in all, Latin America's inward FDI seems to be only marginally – if at all – affected by China. The more worrisome results from Mexico and Colombia, suggest that competing in the same sectors as China increases the likelihood of a substitution of FDI. Having a cursory look a the sector structure of FDI in Mexico and Colombia, we find that manufacturing accounts for 56% of total in the case of Mexico (the largest of all sectors) and 21% in the case of Colombia (the largest after financial services). By contrast, Brazil has a much smaller share of FDI in manufacturing (about 10%) while most of it concentrates on telecommunications and financial services.16 In any event, this interpretation of the results should be taken with care since we do not have enough evidence that this is the main channel through which China affects Latin American FDI. To that end, we would need bilateral and sectoral FDI data, which are not available. When looking into the future, there are reasons to expect that China will continue to receive large amounts of FDI, and perhaps even increase them: the country has embarked in a large privatization process, which has already been announced for some sectors. In addition, the wage differential with Latin American countries will probably be maintained for quite some time given China's large – for some close to infinite – elasticity of labour supply. Finally, even if wages increase substantially, purchasing power for a very large population would also do. This will make China a particularly attractive country for FDI targeting domestic demand. This scenario, where China continues to attract a large share of world FDI, may seem worrisome for Latin American countries, particularly those with a more similar productive structure to that of China. However, it only reflects one side of the coin. At the same time, it provides tremendous opportunities in the medium term. Due to geographical and technological reasons, Latin American countries are not in such good position as Asian economies to profit from China's manufacturing needs. However, they will clearly benefit from China's increasing demand for raw materials in a scenario where China continues to grow fast. This is not only true for Latin American exports but also for inward FDI in sectors related to raw materials. Interestingly, potential investors in the region are not only OECD countries, but also China, which will want to ensure its access to raw materials. This is why the further opening of these sectors to foreign investors is an important condition for Latin American countries to reap these benefits of China's increasing global presence.