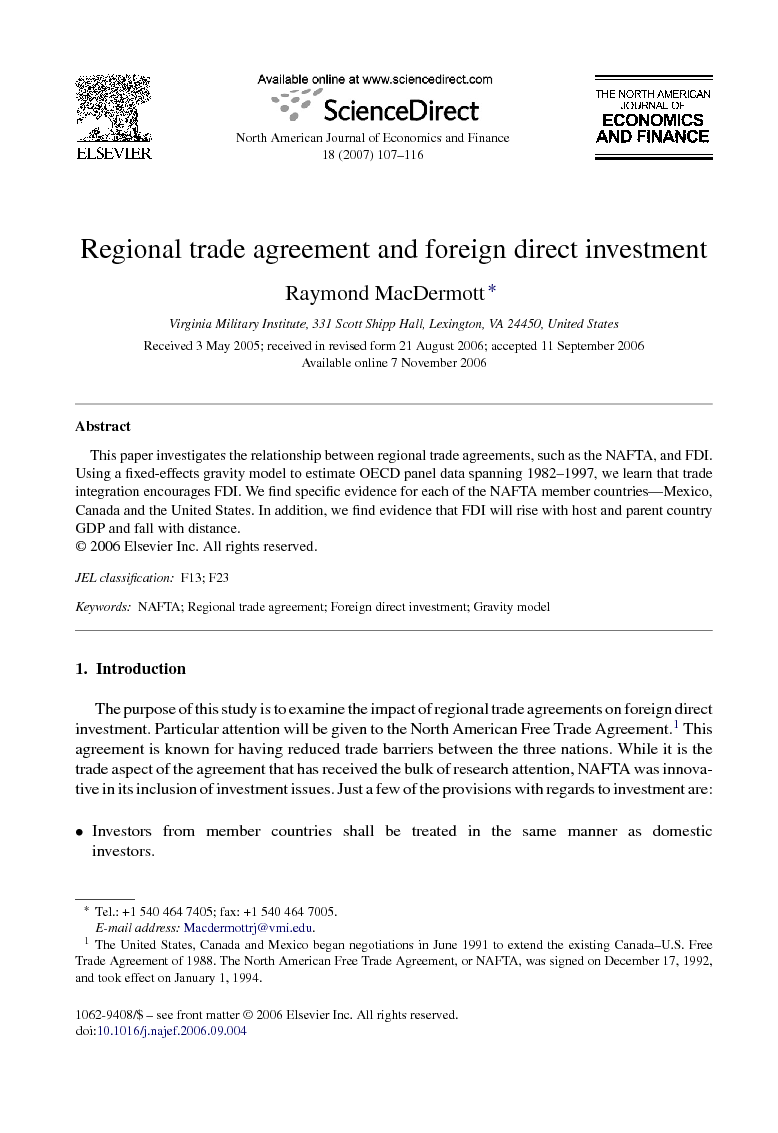 This paper investigates the relationship between regional trade agreements, such as the NAFTA, and FDI. Using a fixed-effects gravity model to estimate OECD panel data spanning 1982–1997, we learn that trade integration encourages FDI. We find specific evidence for each of the NAFTA member countries—Mexico, Canada and the United States. In addition, we find evidence that FDI will rise with host and parent country GDP and fall with distance.

The purpose of this study is to examine the impact of regional trade agreements on foreign direct investment. Particular attention will be given to the North American Free Trade Agreement.1 This agreement is known for having reduced trade barriers between the three nations. While it is the trade aspect of the agreement that has received the bulk of research attention, NAFTA was innovative in its inclusion of investment issues. Just a few of the provisions with regards to investment are: • Investors from member countries shall be treated in the same manner as domestic investors. • Most-Favored-Nation-Treatment—investors from member countries shall be treated no less favorably than those of non-member countries. • The establishment of content requirements, export minimums or the like is prohibited. • Dispute settlement—rather than asking the parent government to pursue a claim against the host government, investors may appeal to an international forum for binding arbitration. While these rulings cannot impose money damages or the return of property, they can be taken to courts in the member countries, which have that power. Fig. 1 shows the evolution of FDI inflows into each of the NAFTA member countries in real U.S. dollars.2 Through the early and mid-1980s, there is no discernable pattern to inflows of FDI into the NAFTA member countries. However, in the late 1980s, FDI into each country appears to taper off slightly before skyrocketing in the 1990s in response to negotiation and implementation of NAFTA. Further scrutiny of Fig. 1 shows evidence of the Mexican currency crisis of 1994–1995 and the decline of FDI during that period. Although NAFTA did not go into effect until January 1994, it is readily seen that FDI increases significantly in anticipation of this event. While Freund and McLaren (1999) document the anticipatory effects on trade, similar reactions may apply to investment as well. From visual inspection it would appear at least a portion of the increase in FDI in the early 1990s can be attributed to anticipatory effects of the trade agreement. To understand the impact of the trade agreement on FDI, we must first understand why firms invest abroad.3 FDI may be a substitute for trade, as in horizontal FDI, where it may be motivated by the need to jump tariffs or other barriers to trade. Hence, intra-regional FDI would be expected to fall with reduced trade barriers. However, FDI from non-member countries could very well rise as a result of the discriminatory nature of the agreement. Firm-specific assets are a motivating force for FDI. Firms must possess some asset that allows them to compete with foreign firms that possess superior knowledge of local customs, markets, etc. While this would not be dependent on trade barriers, eliminating barriers may allow firms to better capitalize on location advantage (think vertical FDI). Lastly, the investment provisions of the NAFTA were established to encourage FDI among member countries. This should lead investors to view investments in partner countries as equivalent to those in the home country. As a result, we would expect to see a rise in FDI due to the signing of this trade agreement. Blomström and Kokko (1997) undertake an empirical review of the data looking at three different types of integration: CUSFTA, Mexico's participation in the NAFTA and MERCOSUR. They find the NAFTA ‘has been connected to significant increases in the inflows of FDI, in particular from countries outside the NAFTA region.’4 Other studies conduct regression analysis on a single country or a few select countries. Sanchez and Karp (1999) focus their efforts on the NAFTA and quantifying its effects in Mexico. Applying ordinary least squares, they find NAFTA to have raised FDI inflows to Mexico by 0.56% per year. Waldkirch (2003) uses Mexican FDI stock from nine partner countries from 1980 to 1998. This study finds an increase in the Mexican stock of FDI as a result of the NAFTA. This increase was attributed almost entirely to the United States and Canada. Meanwhile, Globerman and Shapiro (1999) apply OLS to Canadian FDI flows with the U.S. and UK and find that CUSFTA and NAFTA had significant, positive effects on flows of FDI into Canada. While each of these studies is restricted either to a single country or a handful of countries, the current study takes a broader view by including bilateral FDI flows from 55 countries into each of the OECD countries, providing us with potentially 1540 bilateral country pairs.5 This paper has three goals. The first is to find evidence of the effects of the NAFTA on aggregate foreign direct investment. The second is to search for anticipatory effects of the trade agreement. The third is to examine country-specific evidence of the effects of the NAFTA. By applying a fixed-effects gravity model to panel data from 1980 to 1997, we find strong evidence of NAFTA's positive impact on foreign direct investment both in the aggregate as well as at the country level. Specific evidence is found for each of the member countries. Further, FDI investment is positively related to the size of both the host and the parent economy. Finally, we find weak evidence for the notion that FDI is diminished by distance. In the next section, we provide a brief summary of the data along with a discussion of the gravity model and its empirical results. In the final section, we summarize our findings and discuss possible extensions.

In spite of the innovative inclusion of investment issues in the NAFTA, research has, for the most part, been restricted to the effects on trade. This study applied the gravity model to an OECD panel data set of 1540 country pairs in order to investigate the effects of regional trade agreements, such as the NAFTA, on foreign direct investment. The evidence suggests that these agreements caused an increase in foreign direct investment flows into the member countries. Specific evidence is found for each of the three regional trade agreements tested. Contrary to Waldkirch (2003), these increased flows of FDI do not appear to come from other members of the RTA. NAFTA increases FDI flows into the US by approximately 0.96%, while flows into Mexico rise by 1.73% and into Canada by 1.54%. These findings are similar to but exceed the country-specific results of Globerman and Shapiro (1999) and Sanchez and Karp (1999). In addition, we find increased parent or host economy size encourages FDI. While initial visual inspection of the data suggested anticipatory effects, they failed to play out in the analysis. Finally, some evidence is found supporting the notion that investment tends to go to nearby countries.