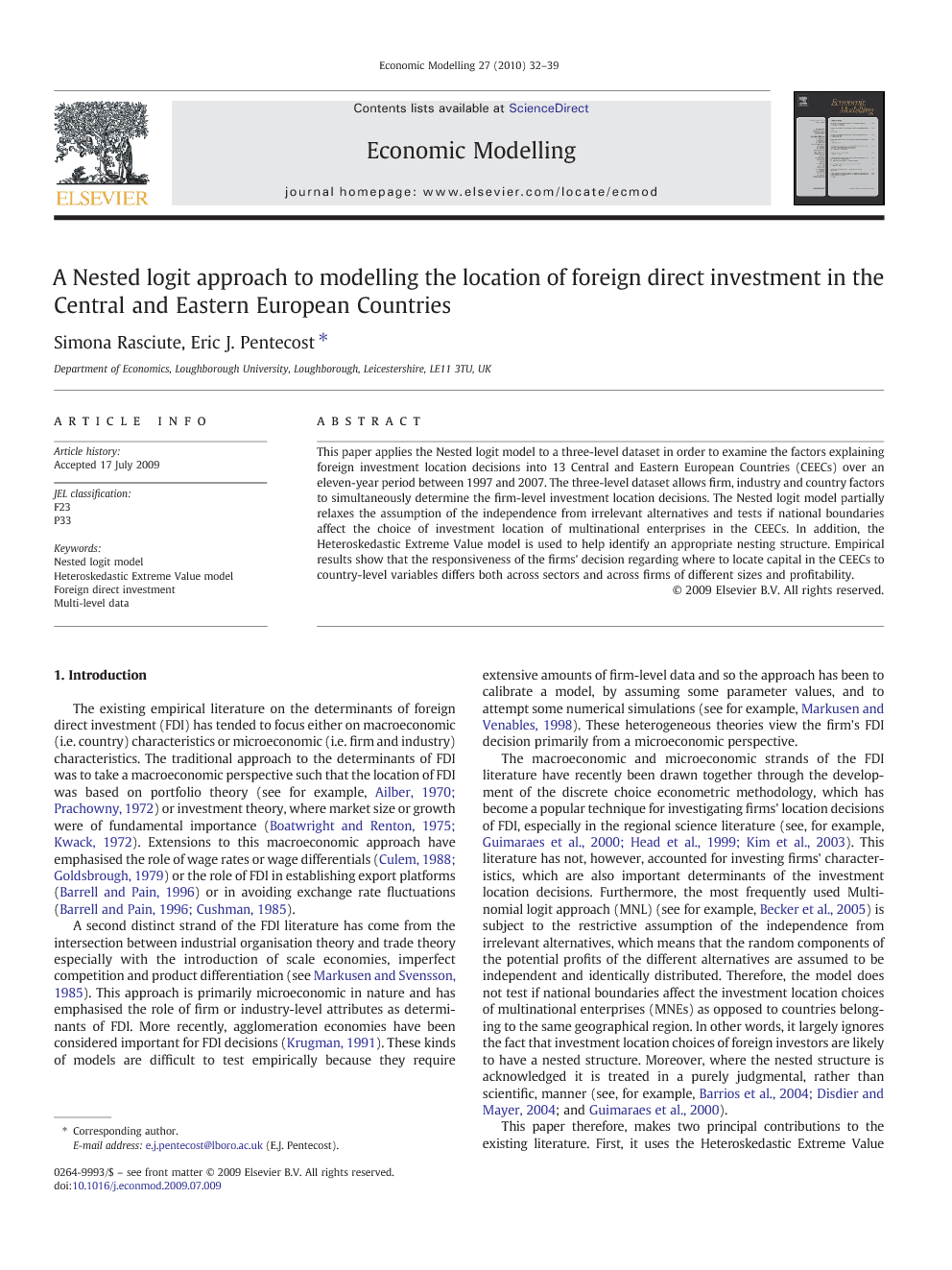 This paper applies the Nested logit model to a three-level dataset in order to examine the factors explaining foreign investment location decisions into 13 Central and Eastern European Countries (CEECs) over an eleven-year period between 1997 and 2007. The three-level dataset allows firm, industry and country factors to simultaneously determine the firm-level investment location decisions. The Nested logit model partially relaxes the assumption of the independence from irrelevant alternatives and tests if national boundaries affect the choice of investment location of multinational enterprises in the CEECs. In addition, the Heteroskedastic Extreme Value model is used to help identify an appropriate nesting structure. Empirical results show that the responsiveness of the firms' decision regarding where to locate capital in the CEECs to country-level variables differs both across sectors and across firms of different sizes and profitability.

The existing empirical literature on the determinants of foreign direct investment (FDI) has tended to focus either on macroeconomic (i.e. country) characteristics or microeconomic (i.e. firm and industry) characteristics. The traditional approach to the determinants of FDI was to take a macroeconomic perspective such that the location of FDI was based on portfolio theory (see for example, Ailber, 1970 and Prachowny, 1972) or investment theory, where market size or growth were of fundamental importance (Boatwright and Renton, 1975 and Kwack, 1972). Extensions to this macroeconomic approach have emphasised the role of wage rates or wage differentials (Culem, 1988 and Goldsbrough, 1979) or the role of FDI in establishing export platforms (Barrell and Pain, 1996) or in avoiding exchange rate fluctuations (Barrell and Pain, 1996 and Cushman, 1985). A second distinct strand of the FDI literature has come from the intersection between industrial organisation theory and trade theory especially with the introduction of scale economies, imperfect competition and product differentiation (see Markusen and Svensson, 1985). This approach is primarily microeconomic in nature and has emphasised the role of firm or industry-level attributes as determinants of FDI. More recently, agglomeration economies have been considered important for FDI decisions (Krugman, 1991). These kinds of models are difficult to test empirically because they require extensive amounts of firm-level data and so the approach has been to calibrate a model, by assuming some parameter values, and to attempt some numerical simulations (see for example, Markusen and Venables, 1998). These heterogeneous theories view the firm's FDI decision primarily from a microeconomic perspective. The macroeconomic and microeconomic strands of the FDI literature have recently been drawn together through the development of the discrete choice econometric methodology, which has become a popular technique for investigating firms' location decisions of FDI, especially in the regional science literature (see, for example, Guimaraes et al., 2000, Head et al., 1999 and Kim et al., 2003). This literature has not, however, accounted for investing firms' characteristics, which are also important determinants of the investment location decisions. Furthermore, the most frequently used Multinomial logit approach (MNL) (see for example, Becker et al., 2005) is subject to the restrictive assumption of the independence from irrelevant alternatives, which means that the random components of the potential profits of the different alternatives are assumed to be independent and identically distributed. Therefore, the model does not test if national boundaries affect the investment location choices of multinational enterprises (MNEs) as opposed to countries belonging to the same geographical region. In other words, it largely ignores the fact that investment location choices of foreign investors are likely to have a nested structure. Moreover, where the nested structure is acknowledged it is treated in a purely judgmental, rather than scientific, manner (see, for example, Barrios et al., 2004 and Disdier and Mayer, 2004; and Guimaraes et al., 2000). This paper therefore, makes two principal contributions to the existing literature. First, it uses the Heteroskedastic Extreme Value model (HEV) developed by Bhat (1995) to help select the most appropriate nesting structure for the data, prior to the estimation of the Nested logit (NL) model, rather than to base such decisions on intuition, which could lead to inappropriate estimates. The second contribution of this paper is to make use of a novel multi-level data set — allowing firm, industry (or sector) and country effects to simultaneously determine the firm-level FDI location decisions, thus integrating both macroeconomic and microeconomic characteristics, including the characteristics of investing firms, to give a more general approach than previous studies, which should lead to more robust estimates. The dataset includes the location choices of 1108 foreign direct investment decisions of firms in the EU (15), Norway, Switzerland, Russia, Japan and the USA into 13 Central and Eastern European Countries (CEECs) — the 12 recent EU member states excluding Cyprus and Malta, but including Croatia, Russia and Ukraine — over an eleven-year period from 1997 to 2007. The results show that not only country and industry-level factors, but also investing firm characteristics, are important to investment location decisions of MNEs. Although, the direction of the effects of the main factors, such as market size, labour costs, distance and common border are consistent with traditional FDI literature, it is difficult to compare other results to the standard literature for two main reasons. First, the traditional literature focuses on either macroeconomic or microeconomic determinants of FDI, ignoring the importance of the integration of the factors at all the three levels and in particular the interaction between firm, industry and country characteristics. Second, in most of the empirical, discrete choice literature on FDI location choices the analyses and policy implications are based only on estimated coefficients, which have little explanatory power (Greene, 2008). Further post-estimation needs to be carried out to show both the direction and the magnitude of the various factors influencing the FDI location decision. Therefore the elasticities and marginal effects presented in this paper are not easily comparable to the results of the majority of other studies that investigate investment location choices of MNEs and thus represent a further small contribution to the literature. The rest of the paper is set out as follows. Section 2 explains the empirical methodology of the NL model and in particular, the HEV model that helps to determine appropriate nests for the data set. Section 3 explains the construction of the variables included in the econometric model and Section 4 presents the econometric results. Finally, Section 5 concludes.

The NL model applied in this paper partially relaxes the assumption of independence from irrelevant alternatives, takes into account the nested structure of investment location choices of MNEs and shows to what extent multinational enterprises consider countries belonging to the same region as close substitutes. In contrast to the previous research the Heteroskedastic Extreme Value (HEV) model is used as a tool to reveal the best nesting structure for hierarchical investment choices of MNEs. The results show that the NL structure guided by the HEV model results produce the NL model that fits the data better than the nesting structure based on intuition. The statistically significant interaction terms between country and industry together with firm-level variables show that country, industry and firm-level factors simultaneously determine the firm-level investment location decision. This more general approach to the FDI location decision shows that to allow for firm heterogeneity is important if robust estimates are to be found for their complex effects. Although, the results of the main effects such as market size, distance, labour costs and common border are consistent with the previous literature on the determinants of FDI, the other findings cannot be easily compared to traditional approaches, where the interpretation of results is based on the estimated coefficients, which are not very informative. Elasticities are marginal effects have to be estimated in order to reveal the direction and the magnitude of various factors. Furthermore, the traditional literature focuses on either macroeconomic or microeconomic features of the FDI location decisions ignoring the fact that these country-level factors may have different value for firms investing in different sectors and for firms of different characteristics.