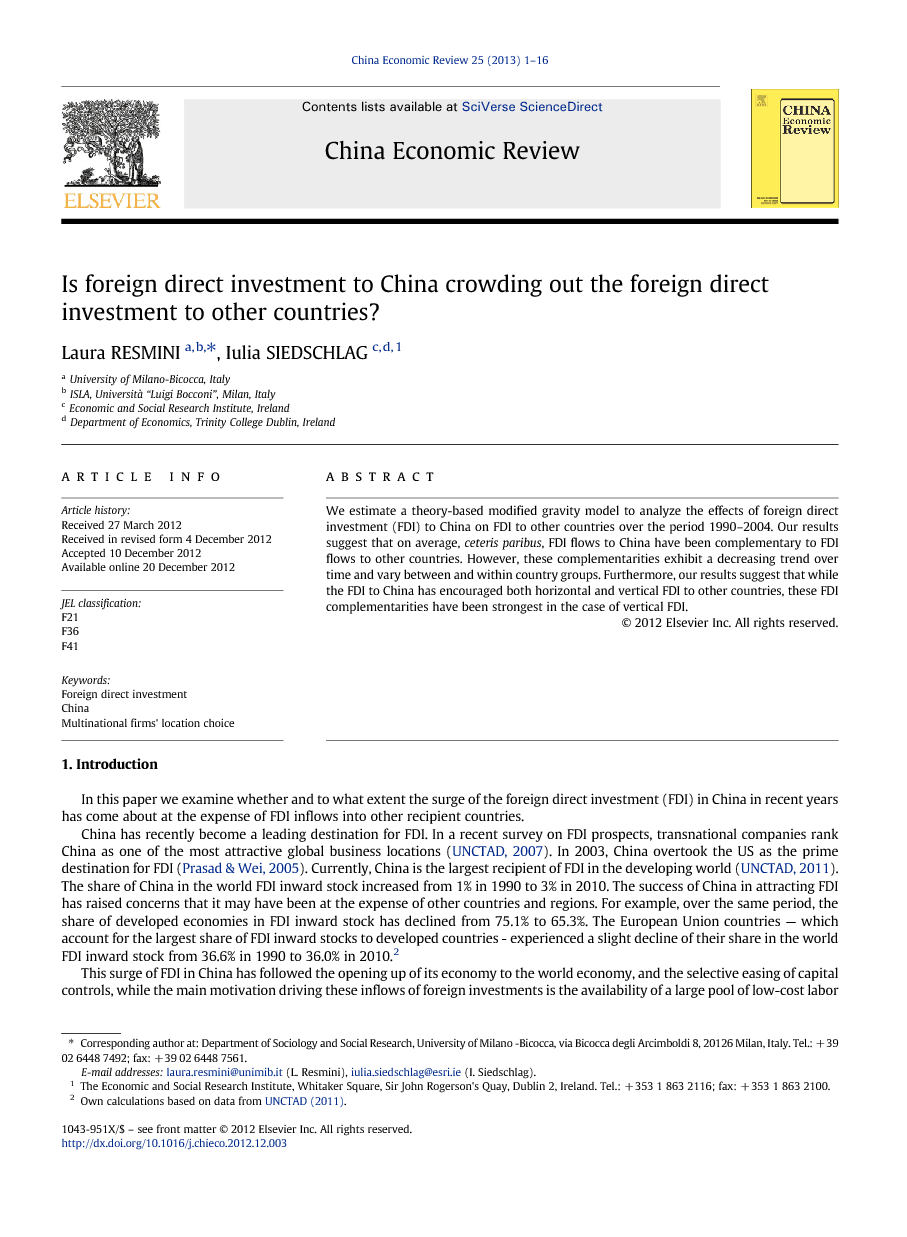 We estimate a theory-based modified gravity model to analyze the effects of foreign direct investment (FDI) to China on FDI to other countries over the period 1990–2004. Our results suggest that on average, ceteris paribus, FDI flows to China have been complementary to FDI flows to other countries. However, these complementarities exhibit a decreasing trend over time and vary between and within country groups. Furthermore, our results suggest that while the FDI to China has encouraged both horizontal and vertical FDI to other countries, these FDI complementarities have been strongest in the case of vertical FDI.

In this paper we examine whether and to what extent the surge of the foreign direct investment (FDI) in China in recent years has come about at the expense of FDI inflows into other recipient countries. China has recently become a leading destination for FDI. In a recent survey on FDI prospects, transnational companies rank China as one of the most attractive global business locations (UNCTAD, 2007). In 2003, China overtook the US as the prime destination for FDI (Prasad & Wei, 2005). Currently, China is the largest recipient of FDI in the developing world (UNCTAD, 2011). The share of China in the world FDI inward stock increased from 1% in 1990 to 3% in 2010. The success of China in attracting FDI has raised concerns that it may have been at the expense of other countries and regions. For example, over the same period, the share of developed economies in FDI inward stock has declined from 75.1% to 65.3%. The European Union countries — which account for the largest share of FDI inward stocks to developed countries - experienced a slight decline of their share in the world FDI inward stock from 36.6% in 1990 to 36.0% in 2010.2 This surge of FDI in China has followed the opening up of its economy to the world economy, and the selective easing of capital controls, while the main motivation driving these inflows of foreign investments is the availability of a large pool of low-cost labor force (Prasad & Wei, 2005). However, in recent years there has been a shift of inward FDI in China towards high-tech industries and services (UNCTAD, 2011). Much of it focuses on the domestic market (Branstetter & Lardy, 2006). This paper aims to provide empirical evidence to answer these concerns, focusing on the impact of FDI in China on FDI in other countries, with a special focus on the EU countries, and, in particular, of new EU countries in Central and Eastern Europe (CEE), given the role played by FDI in their efforts to modernize their economies and the similarities between CEE countries and China (Fung, Korhonen, Li, & Ng, 2008). The research questions addressed in this paper are the following: Is there a China effect on FDI inflows into other countries and particularly into EU countries? Is this effect positive or negative? Has it changed over time? Does it differ for horizontal and vertical FDI, and finally, does this effect differ across host countries? Previous analyses have focused on the effects of FDI in China on developing countries, in particular the Asian countries and the Latin America and Caribbean (LAC) ones (Cravino et al., 2007, Eichengreen and Tong, 2006a, Eichengreen and Tong, 2006b and García-Herrero and Santabárbara, 2007). To the best of our knowledge, this is the first in-depth analysis of the effects of FDI in China on the FDI inflows into EU countries. Our results suggest that on average, ceteris paribus, FDI inflows into China have been complementary to FDI inflows into other countries. This complementary effect is less intense in the EU than in the other recipient countries; it exhibits a decreasing trend over time and varies across countries. Furthermore, our findings suggest that complementary relationships with China are more likely to occur in countries that attract high levels of vertical FDI in comparison with countries where horizontal FDI dominate. The remainder of this paper is organized as follows. Section 2 discusses the theoretical and empirical background for our analysis. Section 3 explains our empirical strategy and the model specifications. In Section 4 we describe the data set that we use. The results of our empirical analysis are presented and discussed in Section 5. Finally, we summarize our findings and conclude in Section 6.

In this paper we have analyzed the effects of FDI to China originating from OECD countries on FDI to European Union and other countries. In particular, we have estimated a modified gravity model using a panel of cross-country annual data over the period 1990–2004. We first examined determinants of bilateral FDI flows and the impact of FDI to China on FDI to other countries. We then investigated whether and to what extent FDI flows to China have occurred at the expense of FDI to the EU. In particular, we distinguished between the EU countries prior to the enlargements of 2004 and 2007 (EU15) and the new EU member states from Central and Eastern Europe. Third, we have examined the variation over time of the effect of FDI to China on FDI to other countries. Fourth, we estimated the average China effects on horizontal and vertical FDI to other host countries as well as country groups-specific and country-specific effects. Our results suggest that, over the analyzed period, bilateral FDI flows originating from OECD countries took place mainly among countries with similar factor endowments and large markets, and responded positively to high levels of institutional quality in the host countries. These results are in line with the theory of multinational enterprises and consistent with previous empirical studies. Moreover, they suggest that most of the bilateral FDI recorded in our sample responded to market rather than efficiency motivations. We have provided empirical evidence showing that, ceteris paribus, FDI inflows into China rose FDI flows to other countries. However, this complementary relationship was not constant across country groups, being less strong in Europe than outside Europe. Within Europe, the most negatively affected countries were the new EU member states in Central and Eastern Europe. This result indicates that the advantage of these latter countries related to their proximity to FDI source countries was not sufficient to neutralize the attractiveness of China as a FDI destination. Our results also indicate that the China effect has decreased over time, thus suggesting the weakening of links with global production networks. The surge of FDI to China has encouraged both horizontal and vertical FDI to the other countries in our sample. In the case of EU15, the FDI complementarity has been lower in the case of horizontal FDI and higher in the case of vertical FDI in comparison with non-EU host countries. We have also examined the China effect on a country basis, and found that, while on average the FDI creation effect prevailed, there were a number of cases in which FDI to China diverted FDI from other host countries. This fact mainly concerns pairs of similar countries within EU15, CEE and between some Latin American countries and some CEE countries. Most interestingly, we have found that FDI inflows to China did not crowd out FDI inflows to a small group of host countries. This group includes four mature and relatively high-income economies – USA, Sweden, Italy and Spain – four emerging relatively low-income countries, i.e. Bulgaria, Romania, Russia and India, and two small medium-level countries, such as Malta and Cyprus. The main conclusion of our analysis is that, on average, FDI to China had no diversion effects, but significant variation between and within country groups existed. Therefore, the issue of competition for investment needs to be further explored in-depth in order to clearly identify factors driving complementary and diversionary effects. To this purpose, more disaggregated bilateral FDI data at sectoral and firm level would help to disentangle specific effects and to estimate more precisely the China effect on FDI to other countries. In so doing, other important points should be kept in mind. First of all, the China effect depends on China's absolute attractiveness for FDI and on the types of FDI it will attract in the future. If China will maintain its present growth rates, it will become more similar to source countries, thus attracting more market-seeking FDI and less efficiency-seeking FDI. Therefore, there will be less room to develop complementarities between FDI flows to China and FDI to other countries. However, China is becoming an attractive location for more value added FDI in both manufacturing and services sectors. These structural transformations should increase the opportunities to develop complementary relationships with FDI in other locations. Last but not least, even though the China effect will persist over time, countries gaining from it may change, since the surge of diversionary effects depends on the relative position of source and recipient countries in the global chain not only in absolute terms, but also relatively to China. Since this position usually evolves over time according to changes in the comparative advantages of the countries involved in global production processes, the China effect on FDI to other countries may change its direction. Finally, this research could be extended in three directions. While this paper focused on aggregate bilateral FDI flows, further research could consider FDI in specific sectors, in particular FDI in R&D and high technology intensive industries, where China is gaining significant comparative advantages (Lall and Albaladejo, 2004 and United Nations Conference on Trade and Development (UNCTAD), 2011). Further, up to date little is known about the relationship between FDI to and exports from China, especially as far as European countries are concerned. Finally, subject to availability of micro data, further research could analyze how the location of multinational enterprises in China affects the location of multinational enterprises in other countries. The exploration of these issues would allow a better understanding of the role China plays in the global economy, in absolute terms and vis-à-vis the European and other developed economies.