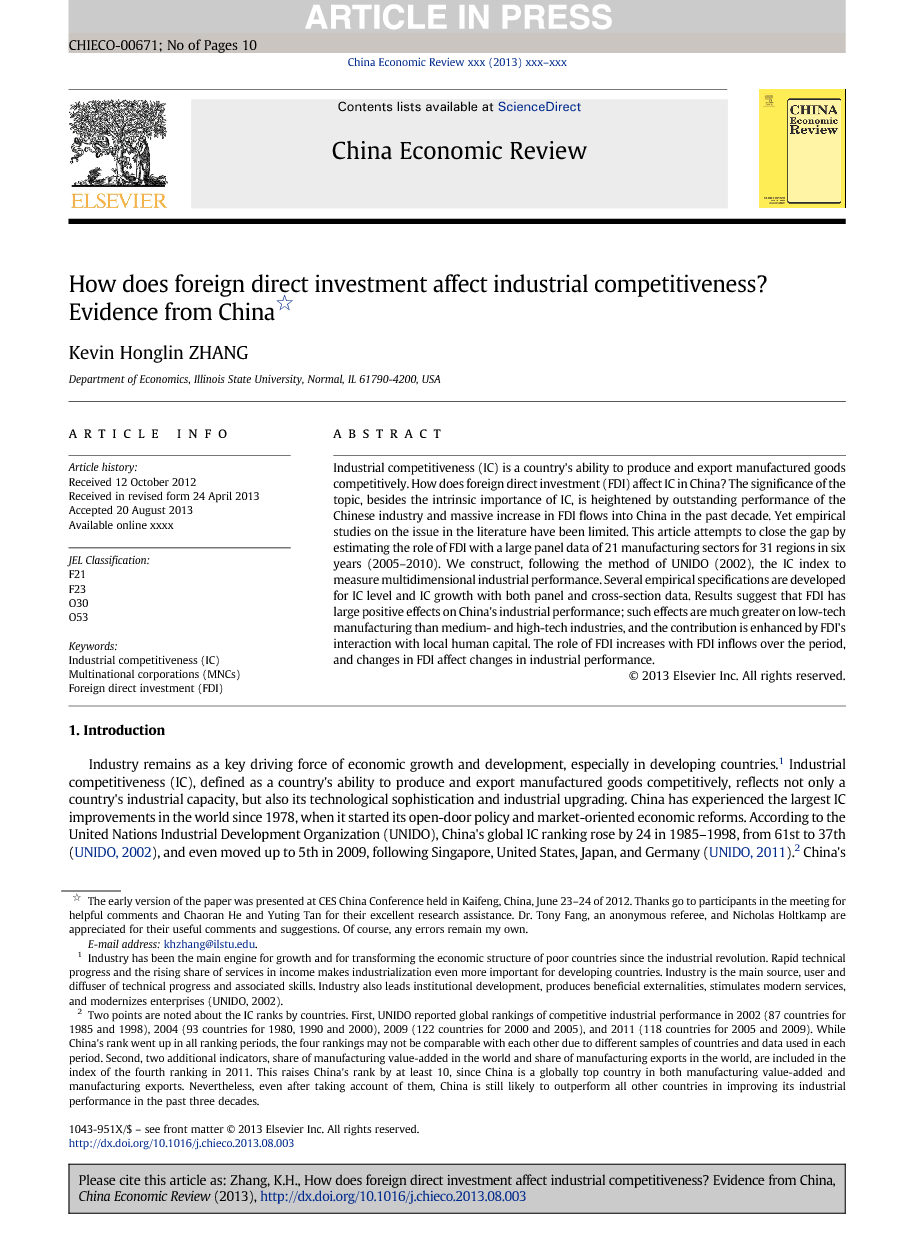 Industrial competitiveness (IC) is a country's ability to produce and export manufactured goods competitively. How does foreign direct investment (FDI) affect IC in China? The significance of the topic, besides the intrinsic importance of IC, is heightened by outstanding performance of the Chinese industry and massive increase in FDI flows into China in the past decade. Yet empirical studies on the issue in the literature have been limited. This article attempts to close the gap by estimating the role of FDI with a large panel data of 21 manufacturing sectors for 31 regions in six years (2005–2010). We construct, following the method of UNIDO (2002), the IC index to measure multidimensional industrial performance. Several empirical specifications are developed for IC level and IC growth with both panel and cross-section data. Results suggest that FDI has large positive effects on China's industrial performance; such effects are much greater on low-tech manufacturing than medium- and high-tech industries, and the contribution is enhanced by FDI's interaction with local human capital. The role of FDI increases with FDI inflows over the period, and changes in FDI affect changes in industrial performance.

Industry remains as a key driving force of economic growth and development, especially in developing countries.1 Industrial competitiveness (IC), defined as a country's ability to produce and export manufactured goods competitively, reflects not only a country's industrial capacity, but also its technological sophistication and industrial upgrading. China has experienced the largest IC improvements in the world since 1978, when it started its open-door policy and market-oriented economic reforms. According to the United Nations Industrial Development Organization (UNIDO), China's global IC ranking rose by 24 in 1985–1998, from 61st to 37th (UNIDO, 2002), and even moved up to 5th in 2009, following Singapore, United States, Japan, and Germany (UNIDO, 2011).2 China's achievement seems to owe much to the adoption of radical initiatives to encourage inward foreign direct investment (FDI) made by multinational corporations (MNCs). By plugging into global value chains organized by MNCs and becoming suppliers of labor-intensive products and components, China seems to have started the innovation and learning process in order to build its industrial capabilities (UNIDO, 2011). While there is a large body of literature on the role of FDI in the Chinese economy, studies on the FDI-IC link have been limited.3 In particular, little work has been devoted to empirically investigating effects of FDI on China's industrial performance (UNIDO, 2011). This paper attempts to close the gap by providing a quantitative assessment of the role of FDI in growing Chinese IC. We first theoretically identify possible channels through which FDI may affect host-country industries. Then we specify empirical models in which a comprehensive measure of IC and different proxies of FDI are developed. Finally we estimate effects of FDI on host IC with both panel and cross-section data. This study has several distinctive features. First, using the data for 21 manufacturing sectors in six years (2005–2010), it computes four indicators of industrial capabilities, with which the IC index is constructed for 31 regions of China. This index, based on the method developed by UNIDO (2002), perhaps is the best measure of multidimensional industrial performance. Second, we use two measures, per capita industrial output by foreign-invested enterprises (FIE) and FIE share of industrial output in total, to proxy the FDI variable in detecting whether or not Chinese industries benefit from activities of MNCs. Third, it employs a fairly straightforward model that is parsimonious and yet includes most major IC determinants as well as FDI. In addition to estimates of the IC level, it conducts regressions for structural changes in IC over 2005–2010 and for the impact of the initial stock of IC determinants in 2005 on subsequent IC in 2010. Fourth, to explore channels through which MNCs affect China's industry, it investigates how each of the four indicators composed of the IC index may be influenced by FDI. Last, the paper studies, as some other researchers have done, the possible complementarity between FDI and local human capital.