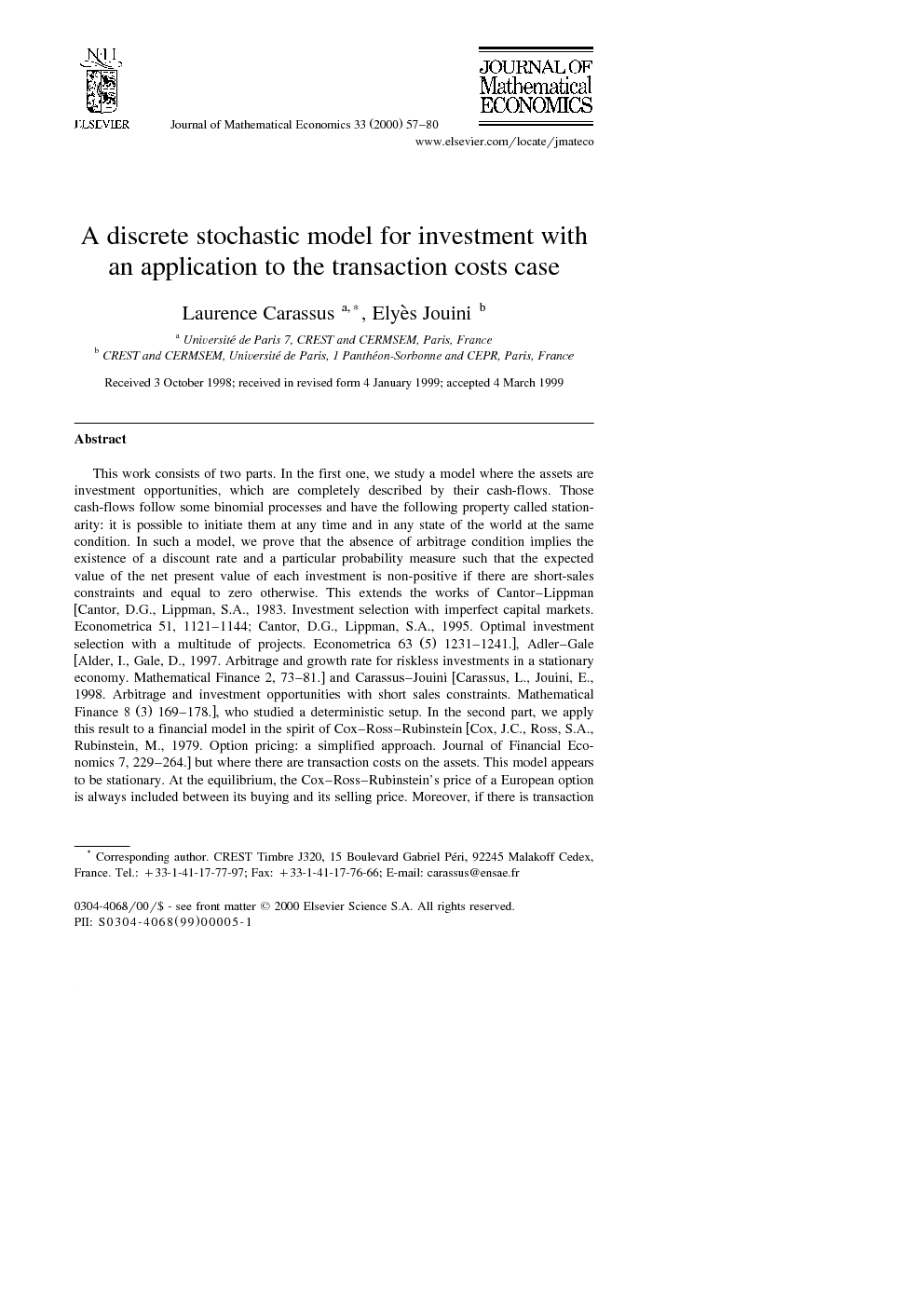 This work consists of two parts. In the first one, we study a model where the assets are investment opportunities, which are completely described by their cash-flows. Those cash-flows follow some binomial processes and have the following property called stationarity: it is possible to initiate them at any time and in any state of the world at the same condition. In such a model, we prove that the absence of arbitrage condition implies the existence of a discount rate and a particular probability measure such that the expected value of the net present value of each investment is non-positive if there are short-sales constraints and equal to zero otherwise. This extends the works of Cantor–Lippman [Cantor, D.G., Lippman, S.A., 1983. Investment selection with imperfect capital markets. Econometrica 51, 1121–1144; Cantor, D.G., Lippman, S.A., 1995. Optimal investment selection with a multitude of projects. Econometrica 63 (5) 1231–1241.], Adler–Gale [Alder, I., Gale, D., 1997. Arbitrage and growth rate for riskless investments in a stationary economy. Mathematical Finance 2, 73–81.] and Carassus–Jouini [Carassus, L., Jouini, E., 1998. Arbitrage and investment opportunities with short sales constraints. Mathematical Finance 8 (3) 169–178.], who studied a deterministic setup. In the second part, we apply this result to a financial model in the spirit of Cox–Ross–Rubinstein [Cox, J.C., Ross, S.A., Rubinstein, M., 1979. Option pricing: a simplified approach. Journal of Financial Economics 7, 229–264.] but where there are transaction costs on the assets. This model appears to be stationary. At the equilibrium, the Cox–Ross–Rubinstein's price of a European option is always included between its buying and its selling price. Moreover, if there is transaction cost only on the underlying asset, the option price will be equal to the Cox–Ross–Rubinstein's price. Those results give more information than the results of Jouini–Kallal [Jouini, E., Kallal, H., 1995. Martingales and arbitrage in securities markets with transaction costs. Journal of Economic Theory 66 (1) 178–197.], which where working in a finite horizon model.

We study a model where investments are completely defined through their generated cash-flows. We assume that the model is stationary, that is, each project is available at every date and in every state of the world at the same conditions. The horizon of the model is then necessarily infinite. This kind of models has been studied in the deterministic case by Cantor and Lippman, 1983 and Cantor and Lippman, 1995, Adler and Gale (1997) and Carassus and Jouini (1998). In the present work, the cash-flows are modeled with stochastic processes, with dynamics described by a binomial tree. First, we generalize the notion of stationarity in a stochastic framework. Then, we prove a no-arbitrage theorem. Recall that, loosely speaking, an arbitrage opportunity is a way of getting something for nothing. The arbitrage assumption is defined thanks to the existence of a strategy leading to a non-negative and non-zero payoff. Under a technical condition, the assumption no-arbitrage implies the existence of an interest rate and a particular probability measure which make the sum of the investments' expected value non-positive if there are short-selling constraints and equal to zero otherwise. In the second part of this work, we present an economic model with an underlying asset, the price of which follows a binomial process, and a family of options written on this asset. We suppose that there are some buying and selling transaction costs (possibly different) on the options and on the underlying asset. As a matter of fact, we suppose that there exists a bid–ask spread on the option price. We prove that the technical assumption made in the first part of the paper is satisfied in this setting. Recall that in a market without transaction costs, the option price is given by the Black–Scholes' formula (Black and Scholes, 1973) in a continuous framework and similarly by the Cox–Ross–Rubinstein's formula (Cox et al., 1979) in the binomial framework. In our imperfect market, we prove that at the equilibrium the Cox–Ross–Rubinstein's price is always between the buying price and the selling price. Moreover, if the bid–ask spread on the options comes from a constant proportional transaction cost, we give explicit bounds for the option price. Notice that if there are only transaction costs on the underlying asset and not on the options, then the options' price is equal the Cox–Ross–Rubinstein's price. This is a new result about transaction costs. Recall that in the paper of Jouini and Kallal (1995), it is proved that the absence of arbitrage condition is equivalent to the existence of an equivalent martingale measure, which turns a particular process lying between the bid and the ask price into a martingale. The no-arbitrage condition allows only to situate the option bid–ask prices in some interval. The lower bound (respectively upper bound) of this interval is obtained as the minimum (respectively maximum) of the expected value of the option future values, under all the equivalent martingale measures. Every sub-interval appears then as an interval compatible with the no-arbitrage condition. This means that the lower (respectively upper) bound of every sub-interval corresponds to a selling (respectively buying) price, which is compatible with the no-arbitrage condition. Of course, the Cox–Ross–Rubinstein's price belongs to the maximal interval but there is no reason why it should belong to every sub-interval. In our model, we prove that the only intervals of equilibrium price are the ones containing the Cox–Ross–Rubinstein's price. This can be explained by the infinite horizon of the model and by the interactions between the different assets at different dates (stationarity).

Suppose that the lending rate is equal to the buying rate and denote by rsr sr this common value. When there is no transaction costs, the price at p e time t of an option with exercise time equal to tqT, and exercise price equal to kS , is t 1 T CRR j U j U Tyj j Tyj q T ,k,S .s C p 1yp . S u d ykS . , t T T t t 1qr . js0 where up Uqd1yp U.s1qr .. This is the main result of the model of Cox et al. 1979.. Recall that the limit of this formula in continuous time is the well-known formula of Black and Scholes 1973.. The option price is the expected value under the probability, defined by the transition probability p U, of the terminal value of the option discounted at the rate r. We mention that when there are transaction costs, the no-arbitrage condition allows only to situate the option price in an interval. The lower respectively upper. bound of this interval corresponds to the lower respectively upper. option price that does not allow arbitrage. Moreover, as showed by Jouini and Kallal 1995., the bounds of every sub-interval also define no arbitrage bid and ask prices. Of course, the Black–Scholes’ price, or the Cox–Ross–Rubinstein’s price in discrete time setting, belong to the maximal interval, but they do not belong to every sub-interval of the maximal one. We show that with an infinite time horizon, the Cox–Ross–Rubinstein’s price is always between the selling and buying price.