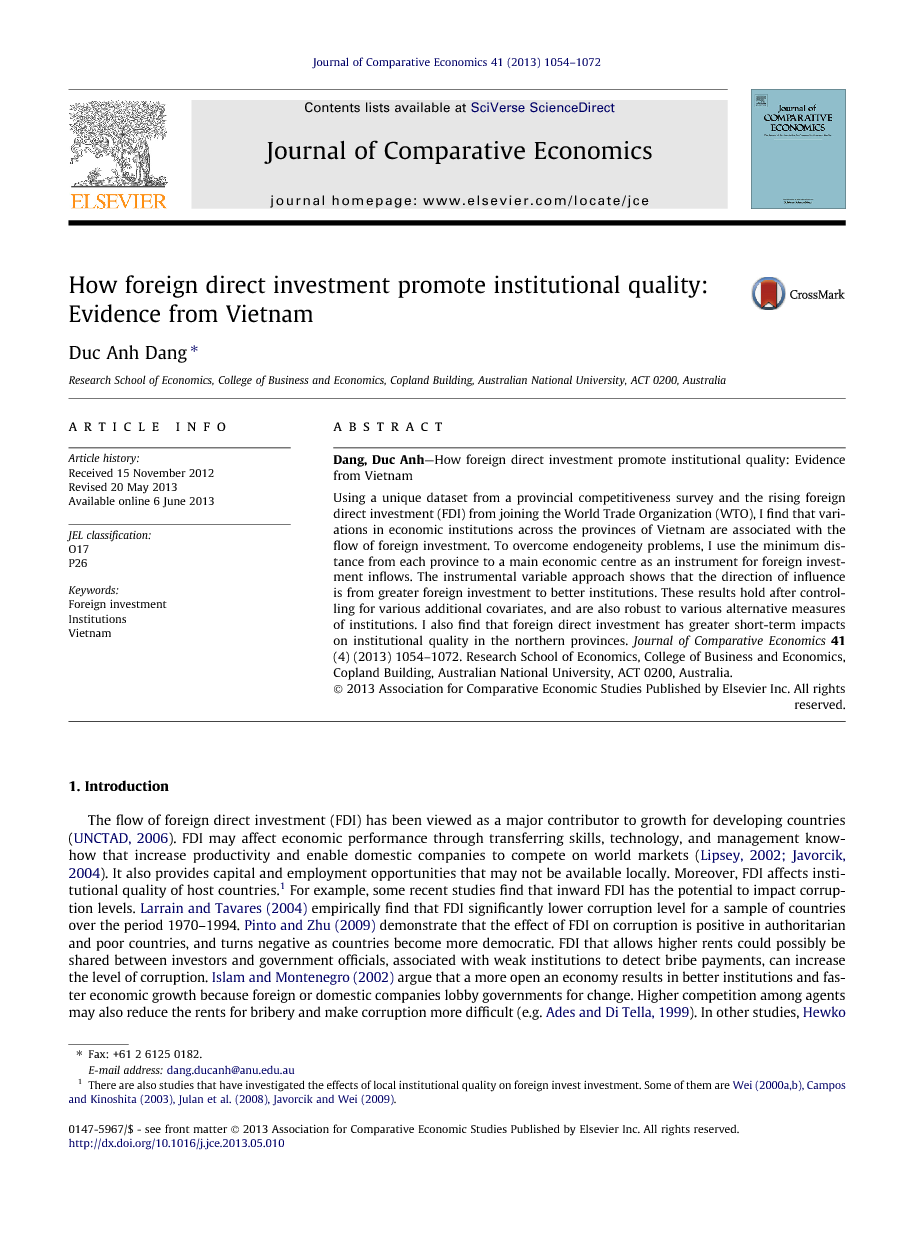 Using a unique dataset from a provincial competitiveness survey and the rising foreign direct investment (FDI) from joining the World Trade Organization (WTO), I find that variations in economic institutions across the provinces of Vietnam are associated with the flow of foreign investment. To overcome endogeneity problems, I use the minimum distance from each province to a main economic centre as an instrument for foreign investment inflows. The instrumental variable approach shows that the direction of influence is from greater foreign investment to better institutions. These results hold after controlling for various additional covariates, and are also robust to various alternative measures of institutions. I also find that foreign direct investment has greater short-term impacts on institutional quality in the northern provinces.

The flow of foreign direct investment (FDI) has been viewed as a major contributor to growth for developing countries (UNCTAD, 2006). FDI may affect economic performance through transferring skills, technology, and management know-how that increase productivity and enable domestic companies to compete on world markets (Lipsey, 2002 and Javorcik, 2004). It also provides capital and employment opportunities that may not be available locally. Moreover, FDI affects institutional quality of host countries.1 For example, some recent studies find that inward FDI has the potential to impact corruption levels. Larrain and Tavares (2004) empirically find that FDI significantly lower corruption level for a sample of countries over the period 1970–1994. Pinto and Zhu (2009) demonstrate that the effect of FDI on corruption is positive in authoritarian and poor countries, and turns negative as countries become more democratic. FDI that allows higher rents could possibly be shared between investors and government officials, associated with weak institutions to detect bribe payments, can increase the level of corruption. Islam and Montenegro (2002) argue that a more open an economy results in better institutions and faster economic growth because foreign or domestic companies lobby governments for change. Higher competition among agents may also reduce the rents for bribery and make corruption more difficult (e.g. Ades and Di Tella, 1999). In other studies, Hewko (2003) and Lewis (2005) provide different examples of foreign investors impacting the policy environment in Eastern Europe and the Former Soviet Union. Malesky (2009) find that the more important foreign investment is in a transition country’s economy (and therefore the stronger the bargaining power of the FDI community as a whole), the more likely the country is to pursue economic reform. He finds positive effects of FDI on economic reform through a panel analysis of investor influence in 27 transitional countries. The relationship is particularly strong in the manufacturing and service sectors, but does not hold for construction, utilities, or natural resource based projects. Many useful insights are gained from this literature; however, current studies are undesirable on two grounds. First, most analyses use institutional measures created by an idiosyncratic weighting of several institutions or categories of institutions. These aggregates are often based on subjective perceptions and are likely to be biased or contaminated by perceptions of a country’s economic performance (Glaeser et al., 2004). Moreover, it seems that there has not yet been an attempt to aggregate these measures into more reliable synthetic measure of institutions (Jellema and Roland, 2009). Second, current analyses have mainly employed cross-country regressions. Therefore, it is generally difficult to control for differences in cultures, legal systems and other institutions that may be relevant for the outcome variable under study. This paper complements current studies by investigating the relationship between foreign investment and institutional quality within countries. In this context, Vietnam is likely to be an appropriate test for several reasons. First, before 1990, the country had a relatively small amount of FDI. The amount of foreign investment increased rapidly along with signing trade agreements, particularly after Vietnam joined the WTO in early 2007. Second, the quality of institutional development has been uneven across provinces. Some provinces show better economic governance and business investment, while others lag behind (Malesky, 2007). Diversity in initial structural conditions, such as geography and proximity to markets can partly explain these differences. However, they cannot explain the substantial differences in the quality of economic institutions among provinces with similar conditions. This variation across space provides a good opportunity to study the impact of foreign investment on institutions while holding political systems and government structure constant. Using a unique dataset for 60 provinces in Vietnam, this study tests the idea that the variation in economic institutions within the country is associated with disbursed foreign direct investment.2 The quality of economic institutions is measured by surveyed index on the perception of private sector businesses on the quality of provincial economic governance. To overcome the shortcoming of using subjective perception variables, I use certain indicators of the effectiveness of provincial government that are not derived from the survey but reflect the actual activities of local governments. I start my analysis by correlating the flow of foreign direct investment with institutional index. I find some evidence that higher FDI correlates positively with quality of provincial institutions. However, the result can be the outcome of a third omitted factor that is jointly correlated with both higher foreign investment and institutional quality. In addition, reverse causality from the quality of institution to higher foreign investment also biases the result. I pursue a number of strategies to address these concerns. My first strategy is to control for other variables that may correlate with both foreign direct investment and quality of institutions. These results are stable after controlling for various additional covariates. My second strategy is to use the distance from the capital of each province to main economic centres as an instrument for foreign investment. The results from the instrumental variable (IV) approach suggest that the greater in flow of foreign investment generates better institutions. They are also robust to various alternative measures of institutional indices, such as business environment, labour training, corruption and pro-activeness of provincial leaders. The effects are found to be greater on provinces in the north. To confirm the findings from IV approach, I carry out some sensitivity tests on the validity of instrumental variable. The results show that, even allowing for plausible amounts of imperfect exogeneity of the instrument, I still find that the coefficients of the foreign investment estimated by the IV approach have positive effects on institutional quality. The remainder of this paper is organised as follows. Section 2 briefly describes the background of the trade liberalisation and foreign investment in Vietnam. Section 3 outlines the potential channels through which high foreign investment flows could lead to institutional changes within the country. Section 4 justifies the data used. Section 5 introduces the empirical strategy. Section 6 presents the results and Section 7 offers concluding remarks.