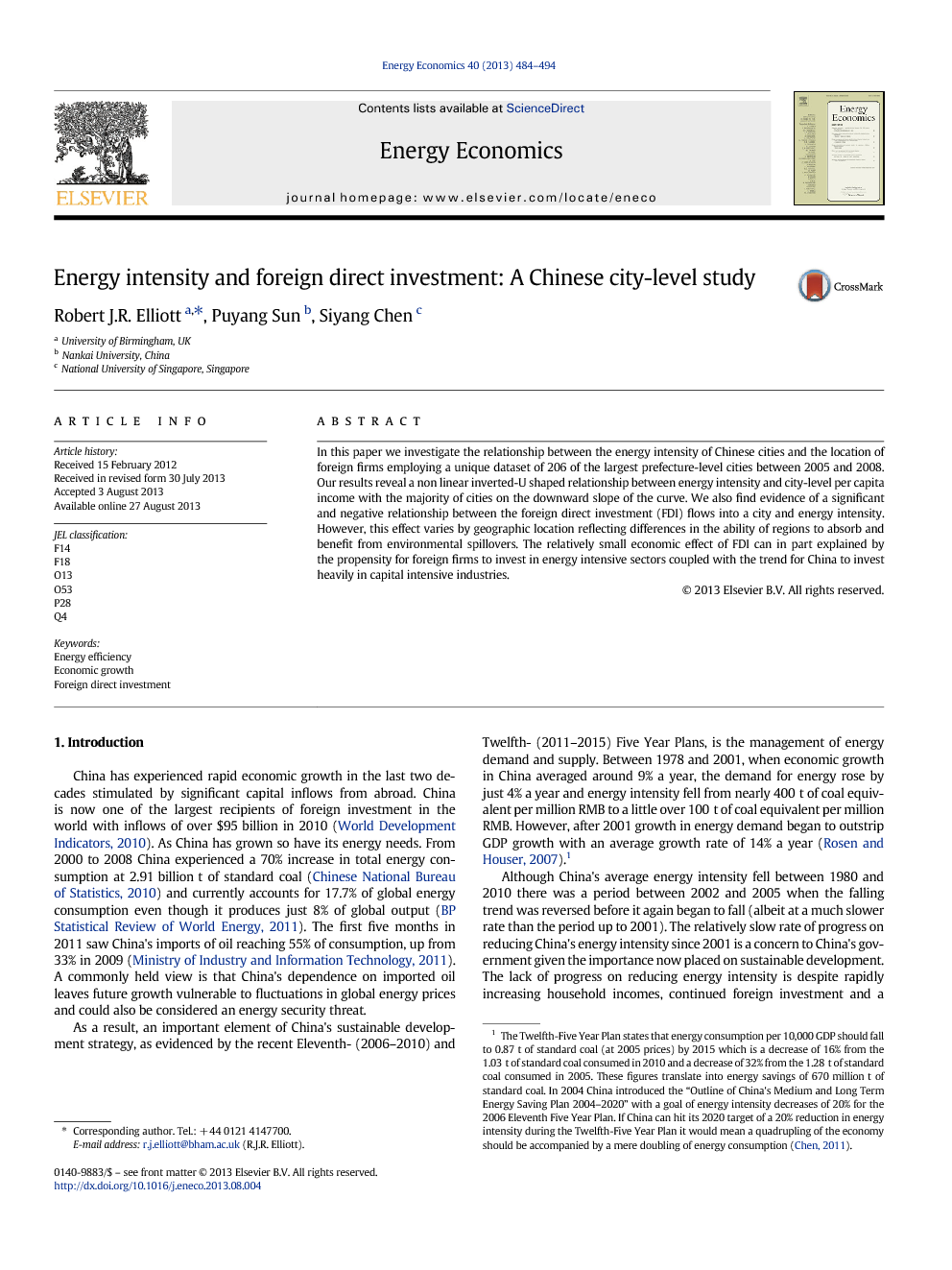 In this paper we investigate the relationship between the energy intensity of Chinese cities and the location of foreign firms employing a unique dataset of 206 of the largest prefecture-level cities between 2005 and 2008. Our results reveal a non linear inverted-U shaped relationship between energy intensity and city-level per capita income with the majority of cities on the downward slope of the curve. We also find evidence of a significant and negative relationship between the foreign direct investment (FDI) flows into a city and energy intensity. However, this effect varies by geographic location reflecting differences in the ability of regions to absorb and benefit from environmental spillovers. The relatively small economic effect of FDI can in part explained by the propensity for foreign firms to invest in energy intensive sectors coupled with the trend for China to invest heavily in capital intensive industries.

In this paper we explore the relationship between growth in per capita incomes, FDI and energy intensity employing a unique panel of 206 Chinese prefectural-level cities between 2005 and 2008. This was a period of rapid economic growth and structural change in China. Our empirical results confirm an inverted-U relationship between per-capita income and energy intensity which suggests that the impact of an increase in income differs with the level of regional development. The location of a large majority of our cities for the period 2005 to 2008 is on the downward sloping part of the inverted-U curve which means rising income per capita has the effect of reducing energy intensity. We also find a significant and negative relationship between FDI and energy intensity which our regional studies show is stronger for the West and the Central region. This suggests that the beneficial FDI effect on energy intensity is not uniform across China. The differences across regions are of interest for regional policy makers who are striving to develop the central provinces in the West as part of the Twelfth-Five Year Plan. It is important to link energy policy and policies to attract new overseas investment. While foreign investment appears to have a positive energy intensity reducing effect, the economic significance is relatively small. One reason may be the increasing investment by foreign firms in energy intensive sectors which may be linked to the competition between cities and provinces within China to have national champions in key strategic sectors such as iron and steel and aluminum. The local financing of regional state-owned enterprises, which allows firms to borrow at beneficial rates, has also encouraged the growth of energy intensive sectors in spite of China's relative comparative advantage in labor-intensive products. Finally, the local allocation of land can be used by local government to encourage high profile energy intensive investment that can pay high taxes and allow further local growth. In summary, while foreign investment can have a beneficial effect on energy intensity and alleviate pressure on the energy consumption in China via technology spillovers the result is not as clear cut as one might expect. More promising is our evidence which suggests that increasing income helps enhance the energy efficiency once a city passes a certain level of income. There is a lot that China can do to meet its 2020 targets but the implementation is complicated by the complex mix of central policies, local incentives, market forces and the enforcements of environmental regulations. A closer investigation of these issues is left for future research.