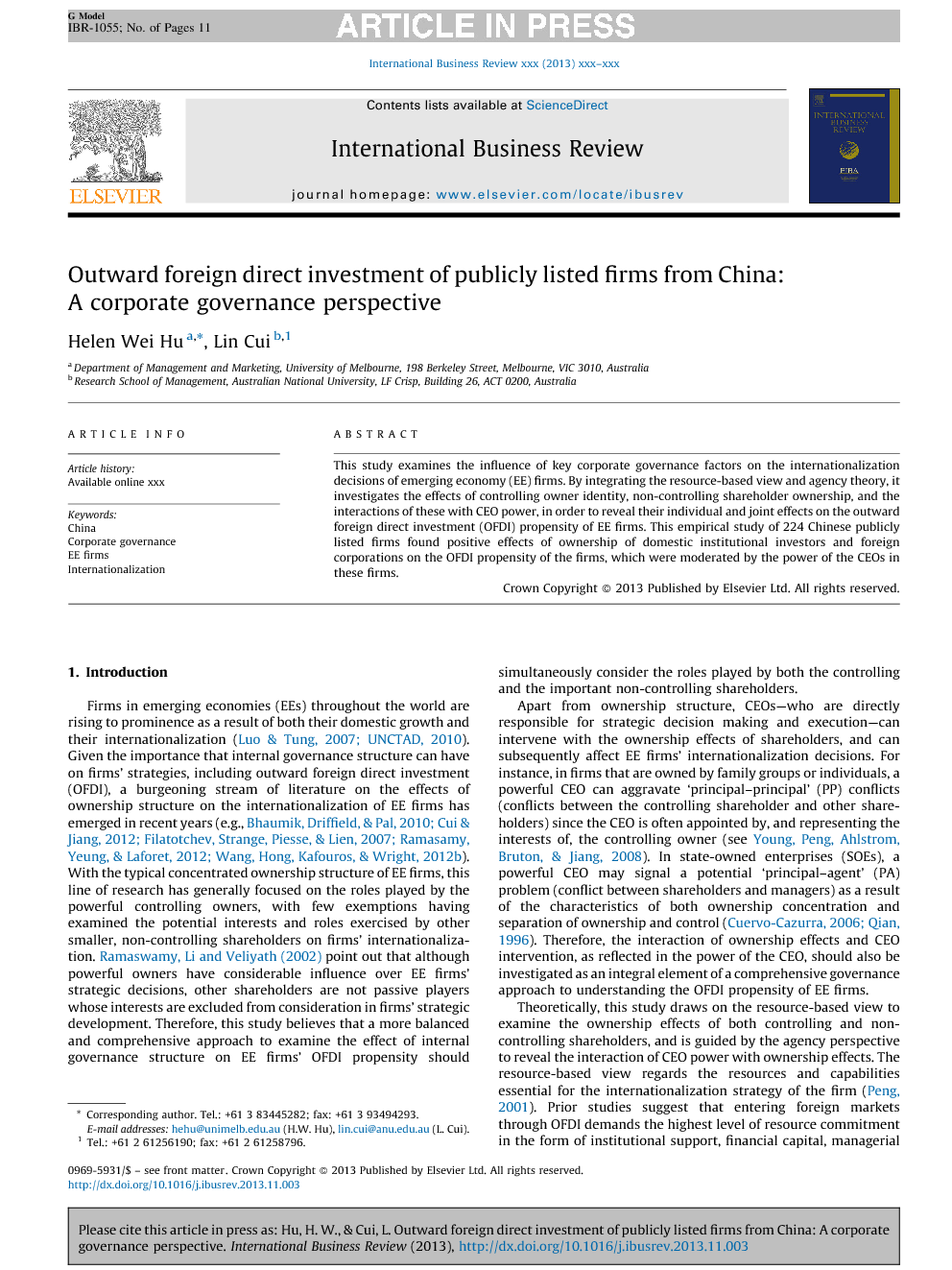 This study examines the influence of key corporate governance factors on the internationalization decisions of emerging economy (EE) firms. By integrating the resource-based view and agency theory, it investigates the effects of controlling owner identity, non-controlling shareholder ownership, and the interactions of these with CEO power, in order to reveal their individual and joint effects on the outward foreign direct investment (OFDI) propensity of EE firms. This empirical study of 224 Chinese publicly listed firms found positive effects of ownership of domestic institutional investors and foreign corporations on the OFDI propensity of the firms, which were moderated by the power of the CEOs in these firms.

Firms in emerging economies (EEs) throughout the world are rising to prominence as a result of both their domestic growth and their internationalization (Luo and Tung, 2007 and UNCTAD, 2010). Given the importance that internal governance structure can have on firms’ strategies, including outward foreign direct investment (OFDI), a burgeoning stream of literature on the effects of ownership structure on the internationalization of EE firms has emerged in recent years (e.g., Bhaumik et al., 2010, Cui and Jiang, 2012, Filatotchev et al., 2007, Ramasamy et al., 2012 and Wang et al., 2012b). With the typical concentrated ownership structure of EE firms, this line of research has generally focused on the roles played by the powerful controlling owners, with few exemptions having examined the potential interests and roles exercised by other smaller, non-controlling shareholders on firms’ internationalization. Ramaswamy, Li and Veliyath (2002) point out that although powerful owners have considerable influence over EE firms’ strategic decisions, other shareholders are not passive players whose interests are excluded from consideration in firms’ strategic development. Therefore, this study believes that a more balanced and comprehensive approach to examine the effect of internal governance structure on EE firms’ OFDI propensity should simultaneously consider the roles played by both the controlling and the important non-controlling shareholders. Apart from ownership structure, CEOs—who are directly responsible for strategic decision making and execution—can intervene with the ownership effects of shareholders, and can subsequently affect EE firms’ internationalization decisions. For instance, in firms that are owned by family groups or individuals, a powerful CEO can aggravate ‘principal–principal’ (PP) conflicts (conflicts between the controlling shareholder and other shareholders) since the CEO is often appointed by, and representing the interests of, the controlling owner (see Young, Peng, Ahlstrom, Bruton, & Jiang, 2008). In state-owned enterprises (SOEs), a powerful CEO may signal a potential ‘principal–agent’ (PA) problem (conflict between shareholders and managers) as a result of the characteristics of both ownership concentration and separation of ownership and control (Cuervo-Cazurra, 2006 and Qian, 1996). Therefore, the interaction of ownership effects and CEO intervention, as reflected in the power of the CEO, should also be investigated as an integral element of a comprehensive governance approach to understanding the OFDI propensity of EE firms. Theoretically, this study draws on the resource-based view to examine the ownership effects of both controlling and non-controlling shareholders, and is guided by the agency perspective to reveal the interaction of CEO power with ownership effects. The resource-based view regards the resources and capabilities essential for the internationalization strategy of the firm (Peng, 2001). Prior studies suggest that entering foreign markets through OFDI demands the highest level of resource commitment in the form of institutional support, financial capital, managerial expertise, technological competency, foreign market knowledge, and international business experience (see Brouthers et al., 1996, Dunning, 1998 and Meyer et al., 2009). While all shareholders possess certain resources, different shareholders can contribute different types of resources to firms. For instance, controlling shareholders such as the state owner can provide capital, subsidies, intermediary services, and policy-related benefits to firms in their internationalization development ( Cui and Jiang, 2010, Morck et al., 2008 and Wang et al., 2012b). In contrast, non-controlling shareholders such as domestic institutional investors and foreign corporations have financial capability and superior expertise that allow EE firms to mitigate financial barriers and environmental uncertainties during their international expansion ( Bhaumik et al., 2010 and Filatotchev et al., 2007). Collectively, the resource aspect of these shareholders forms the ownership advantages that are of critical importance for firms’ OFDI. While offering resources to firms, shareholders also experience various degrees of agency challenge. Drawing from the agency theory, this study argues that to safeguard self-interests, the resource role of the shareholders is bounded by the agency problems presented in the firm. In other words, the severity of potential PA and PP conflicts resulting from the power of a firm's CEO can affect the resource role and consequently the interest of the shareholders in the internationalization development of the firm. Therefore, by integrating the resource-based view and the agency perspective, this study shows the boundary condition of CEO power on the ownership effects of different types of shareholders. China was chosen as the empirical context of this research. While leading all EEs in OFDI volume in recent years (MOFCOM, 2012), China has also nurtured a variety of publicly listed firms with different ownership identities, ownership structures, and associated agency conflicts. The significance of Chinese OFDI and the diversity of Chinese publicly listed firms that are active in OFDI offered an ideal empirical context for this study. Accordingly, 224 state-owned and privately owned Chinese firms were studied from 2005 to 2008 to examine the effects of: (1) the identity of the controlling owner (state vs. private), (2) the ownership of domestic institutional investors and foreign corporations, and (3) the effects of these ownerships interacting with CEO power on the OFDI propensity of firms. The main contribution of this study is two-fold. First, by focusing on the resource-based view, this study highlights the different resources that can be offered by different types of shareholders. By advancing the internationalization research on EE firms—which has placed more emphasis on the influence of firms’ controlling owner—this study shows that non-controlling shareholders, such as domestic institutional investors and foreign corporations, are able to provide crucial resources to support EE firms’ internationalization. Second, CEOs are an inseparable part of PA and PP conflicts (Cuervo-Cazurra, 2006), and their power has complex governance implications for the resource role of different shareholders. By integrating the agency theory with the resource-based view, this study argues that shareholders’ resource contribution effect is contingent upon the salience of the agency challenges they face, which is reflected in the power of the CEO that affects the governance efficacy of the shareholders. Jointly, this study provides new insights into the research on the OFDI of EE firms from a corporate governance perspective.

Given the rising power of EEs and the fast growing number of their firms expanding into the global market, this study seeks to provide new insights into the OFDI propensity of EE firms from a corporate governance perspective. In particular, it examines the effect of firm ownership structure, including the controlling owner's identity and the ownership effect of other salient non-controlling shareholders. While it is argued that shareholders provide various resource supports that can be used by an internationalizing firm, such a resource contribution effect is moderated by the agency challenge that can be present in the firm. By incorporating the resource-based and agency-based arguments, this study provides a more integrated approach to explain EE firms’ OFDI propensity from a corporate governance perspective. In particular, this study contributes to the knowledge stock by extending the ownership discussion from a sole focus on the controlling owner to a wider spectrum of salient shareholders, and by explicating the interaction between shareholder effect and agency issues. The empirical tests reveal quite contrasting results for the different ownership effects. The lack of support for Hypothesis 1a may indicate that, although SOEs have privileged access to government financial support and can benefit from OFDI promotion policies, state ownership does not necessarily influence the OFDI propensity of such firms. There can be potential challenges for SOEs in their international expansion. For example, SOEs often struggle to fulfill the multiple and sometimes conflicting goals of FDI that arise from their close connection with the government and their own business needs. Some SOEs may need to adjust their FDI strategies to fit into a narrowly confined geographic area and business line in order to complete state-assigned mandates within their area of expertise (Luo & Tung, 2007). Moreover, SOEs are subject to lengthy and complex OFDI approval procedures that require reporting to multiple government agencies (Cui & Jiang, 2010). The time that is required for these procedures is costly because a timely response is essential for being globally competitive. In addition, state ownership provokes concerns related to national security and unfair competition from host country governments, which makes it difficult for SOEs to attain institutional legitimacy overseas (Cui and Jiang, 2012, Globerman and Shapiro, 2009 and He and Lyles, 2008). Several cases highlight the difficulty of gaining legitimacy in foreign markets when firms are owned by the Chinese government, such as China National Offshore Oil Corp's failed attempt to buy Unocal in 2005 and Chinalco's failed deal with Rio Tinto in 2009 (Salidjanova, 2011). Therefore, a lack of strategic flexibility, responsiveness, and institutional legitimacy can limit the opportunities of SOEs and increase the barriers to conducting OFDI. This study finds support for the hypotheses that the levels of DII and FC ownership in an EE firm are positively associated with the OFDI propensity of the firm. These positive effects can be explained by the resource role of these shareholders. That is, EE firms are particularly constrained by resource deficiencies or disadvantages when they internationalize through OFDI, which demands high levels of resource commitment. In turn, the tangible and intangible resources contributed by DIIs and FCs are critical for the OFDI of EE firms. The hypothesized moderating effects also yield diverging results. The results show that the relationship between DII ownership and OFDI propensity weakens when CEO power increases. This is consistent with the agency theory argument that a high level of CEO power often leads to weak governance mechanisms for firms (Bebchuk & Fried, 2004), which triggers a loss of confidence for DIIs to contribute resources, thereby further weakening the positive effect of their ownership on OFDI propensity. However, the results do not support the hypothesized moderating effect of CEO power on the relationship between state owner and OFDI propensity. A possible reason for this is that the controlling owner identity effect is not bounded by the agency problem because ownership concentration itself is a strong governance mechanism that elevates the PA problem. The moderating effect of CEO power on FC ownership is positive in the ordered logit regression, but insignificant in the robustness test. The lack of support for the hypothesized negative moderation effect (Hypothesis 2c) may be due to the type of resources contributed by these shareholders. A possible explanation for the inconsistent results is that, unlike DIIs, the resource contributions by FCs are primarily intangible and are realized through know-how and knowledge transfer. The transfer of tacit know-how and sophisticated knowledge is typically internalized to reduce transaction costs; such a transfer requires collaboration between the transferer and recipient. Kachra and White (2008) suggest that the transfer of know-how is highly dependent on reciprocity arrangements between organizations. Therefore, even with powerful CEOs, the resource input by FC investors cannot be easily abused by CEOs for personal gains. Given the difficulty in manipulating these intangible resources for direct financial gains, CEOs may attempt to use FCs’ resources to build personal human and especially social capital in the pursuit of self-interest, possibly through high profile investment activities such as OFDI.