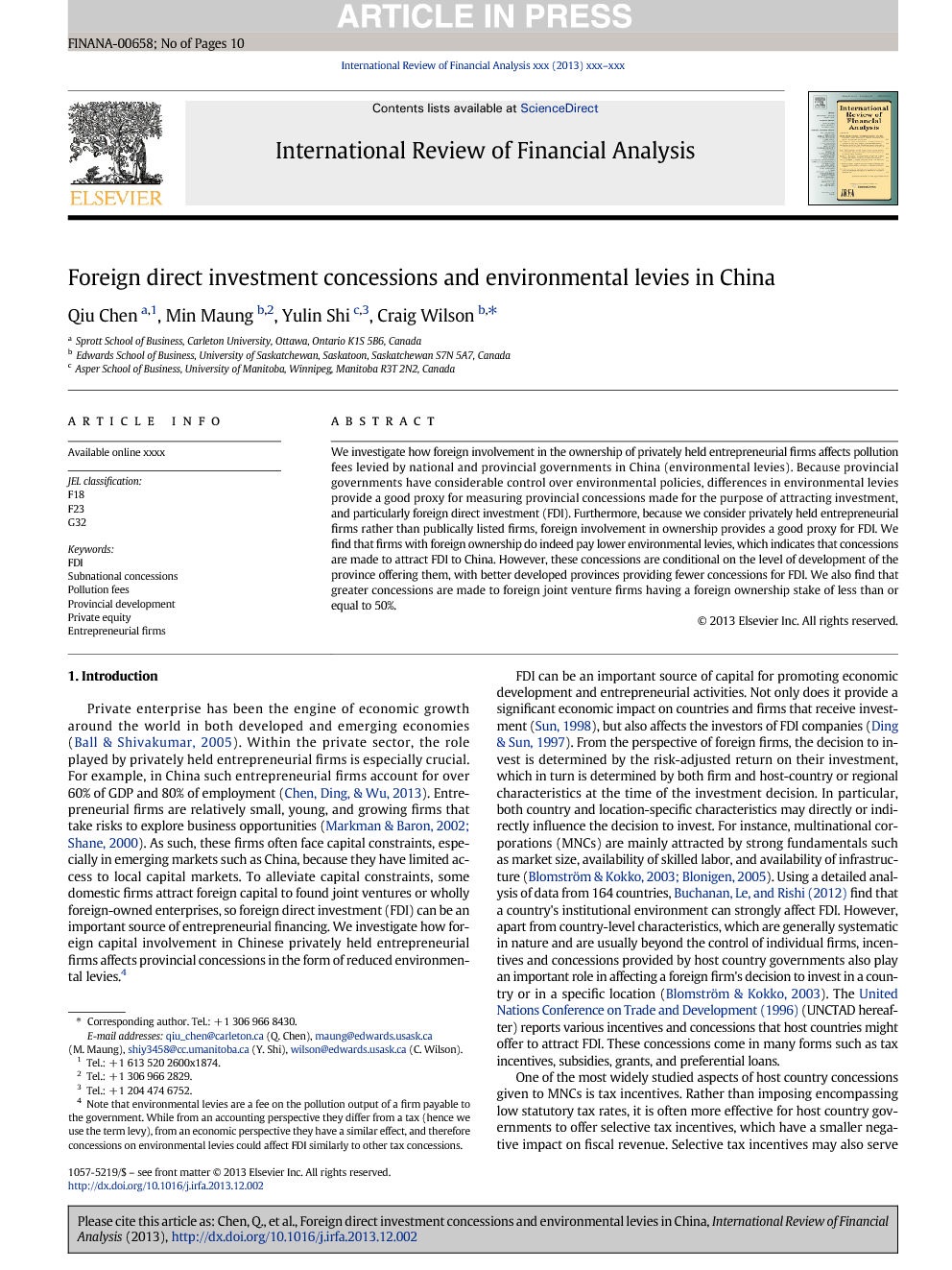 We investigate how foreign involvement in the ownership of privately held entrepreneurial firms affects pollution fees levied by national and provincial governments in China (environmental levies). Because provincial governments have considerable control over environmental policies, differences in environmental levies provide a good proxy for measuring provincial concessions made for the purpose of attracting investment, and particularly foreign direct investment (FDI). Furthermore, because we consider privately held entrepreneurial firms rather than publically listed firms, foreign involvement in ownership provides a good proxy for FDI. We find that firms with foreign ownership do indeed pay lower environmental levies, which indicates that concessions are made to attract FDI to China. However, these concessions are conditional on the level of development of the province offering them, with better developed provinces providing fewer concessions for FDI. We also find that greater concessions are made to foreign joint venture firms having a foreign ownership stake of less than or equal to 50%.

Foreign direct investment (FDI) is increasingly being recognized as an important driver of economic growth in many developing countries. FDI not only infuses much needed capital but also transfers technology and other managerial skills. Recognizing its many potential benefits, countries often strive to create an environment conducive to FDI and provide various concessions to foreign capital providers. Nonetheless, the efficacy of incentives as a determinant for attracting FDI is still much debated. Cross-country studies of tax incentives are not only plagued with the complexities of different tax systems but are also influenced by unobserved country characteristics, which can muddle the results. Focusing on regions within a single country having different economic growth and development provides enough heterogeneity for meaningful analysis and avoids the usual pitfalls found in cross-country analysis. We also avoid concerns associated with volatile portfolio capital flows by using a unique set of private entrepreneurial firms. We consider FDI incentives from the perspective of foreign capital providers and investigate the relation between foreign involvement in firm ownership and concessions provided to private firms in different regions of China with different levels of economic development. In other words, we directly attempt to observe whether the perceived benefits of investing in a country that seemingly offers concessions actually translate into realized benefits. Differences in fees levied on pollution emissions (environmental levies) provide a good proxy for measuring provincial concessions made for the purpose of attracting investment. We find that firms with greater foreign ownership pay lower environmental levies, which indicates that concessions are made to attract FDI to China, and that firms actually benefit from foreign ownership involvement. Needless to say, providers of foreign capital benefit as well. Furthermore, this reduction in levies is greater for joint venture firms that have ownership stakes of less than or equal to 50%. However, these concessions are conditional on the level of development of the province offering them, with better developed provinces providing fewer concessions for FDI. This finding indirectly contributes to the existing negotiation theories that involve MNCs and host governments: Countries or regions that possess stronger fundamentals have better negotiation power. One limitation of our study is that we cannot directly control for firm level pollution emissions, although we do control for other factors related to pollution. Recent studies have shown that the market rewards firms that take efforts to mitigate environmental impact (Aggarwal & Dow, 2012). Further research may examine the market response to changes in environmental levies. Environmental regulation is one of the many factors to consider when investors make international investment. Further studies could also explore how legal, ethical, cultural, and socio-political institutions affect the relation between environmental regulations and international investment and FDI (Cressy, Cumming, & Mallin, 2012), particularly as they relate to environmental levies in China.