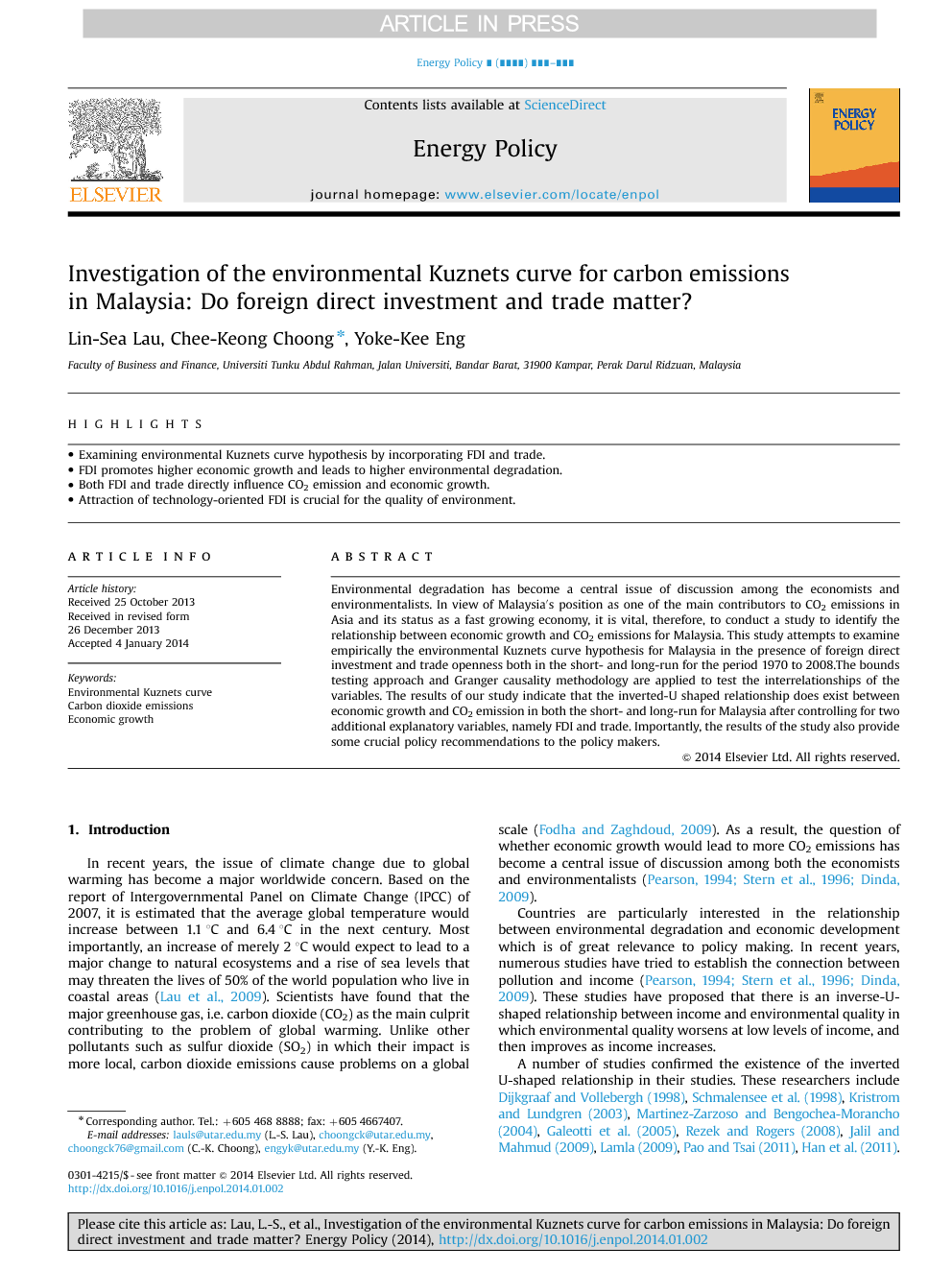 Environmental degradation has become a central issue of discussion among the economists and environmentalists. In view of Malaysia's position as one of the main contributors to CO2 emissions in Asia and its status as a fast growing economy, it is vital, therefore, to conduct a study to identify the relationship between economic growth and CO2 emissions for Malaysia. This study attempts to examine empirically the environmental Kuznets curve hypothesis for Malaysia in the presence of foreign direct investment and trade openness both in the short- and long-run for the period 1970 to 2008.The bounds testing approach and Granger causality methodology are applied to test the interrelationships of the variables. The results of our study indicate that the inverted-U shaped relationship does exist between economic growth and CO2 emission in both the short- and long-run for Malaysia after controlling for two additional explanatory variables, namely FDI and trade. Importantly, the results of the study also provide some crucial policy recommendations to the policy makers.

The present paper has used bounds testing approach and Granger causality methodology to examine the validity of EKC hypothesis in Malaysia from 1970 to 2008. The empirical findings based on these tests suggest that EKC hypothesis is valid in both short- and long-run in Malaysia after controlling for two additional explanatory variables (FDI and Trade). It is also found that both FDI and trade lead to degradation in environmental quality. In addition, there is strong evidence of a bi-directional causality between CO2 and economic growth, and FDI and economic growth. The policy implications are clear. Understanding the validity and direction of causality between CO2 emission and economic growth with FDI and trade openness is crucial for designing policies that encourage private investors such as FDI and liberalise the level of trade in Malaysia. First of all, the existence of EKC indicates that the country’s effort in reducing CO2 emissions has produced significant results since the introduction of National Policy on the Environment (NPE) in 2002. However, in order to reduce CO2 emissions further, it is suggested that the authority of the country must work hand in hand with local entities such as non-governmental organizations and educational institutions in tackling the issue. Next, the bi-directional causality between CO2 and economic growth, and FDI and economic growth cast some doubts on the policy guidelines which always emphasise the importance of FDI for growth under the notion that “FDI causes growth” irrespective of its effect on the environmental quality. Therefore, increased attention is required to be given to the quality of FDI (technology-oriented and export-oriented FDI) and the effect of FDIs on the quality of environment. Similar to FDI, Malaysia is benefited from trade openness via higher economic growth. On the other hand, however, international trade is disastrous to the environment. This indicates that the technique effect is not strong enough to generate a reduction in CO2 emissions in the country. Thus, it is recommended that the policy makers of the country should encourage local industries particularly export-oriented industries to replace obsolete and dirty technologies with green technologies. In such a case, various incentives such as tax reduction or exemption can be granted so that industries would have the initiatives to do so.