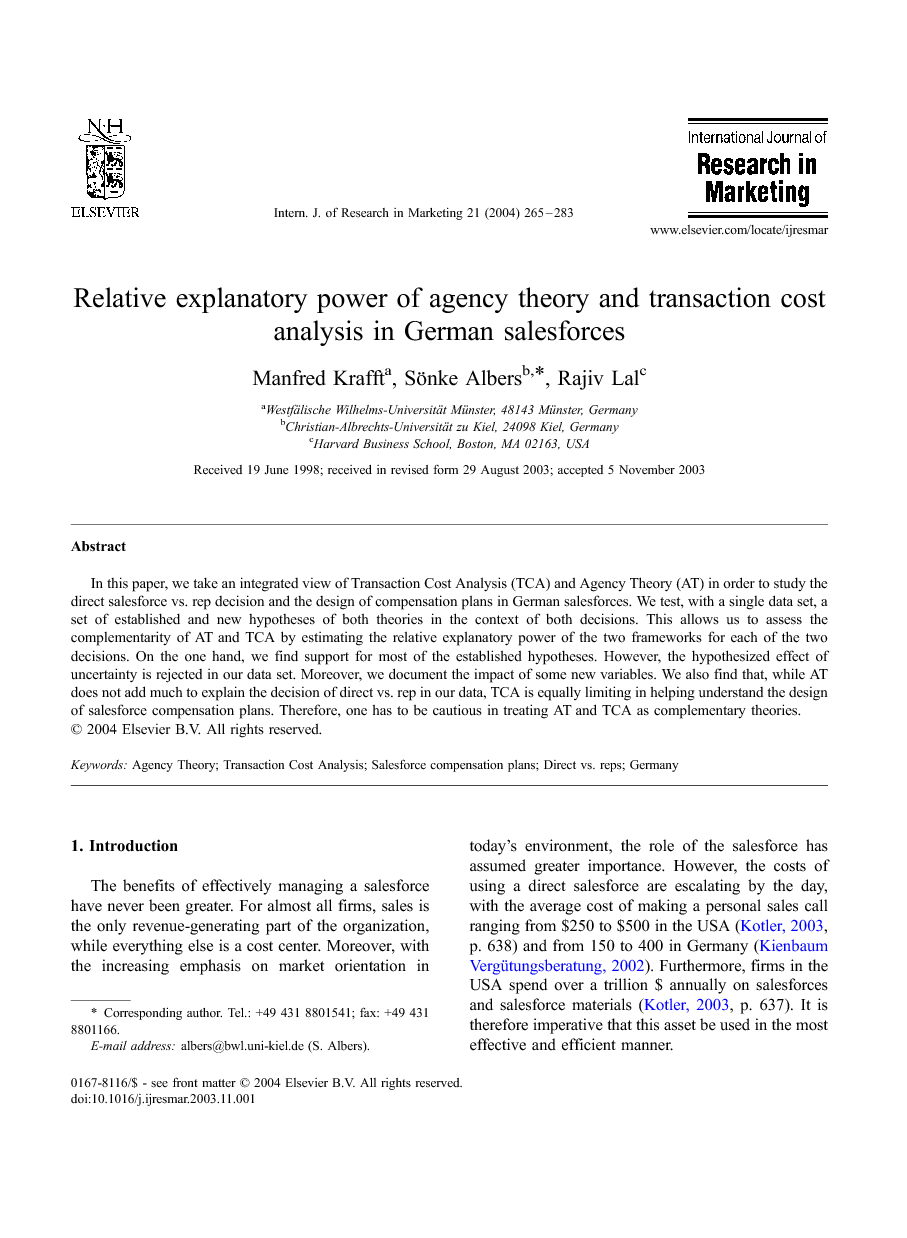 In this paper, we take an integrated view of Transaction Cost Analysis (TCA) and Agency Theory (AT) in order to study the direct salesforce vs. rep decision and the design of compensation plans in German salesforces. We test, with a single data set, a set of established and new hypotheses of both theories in the context of both decisions. This allows us to assess the complementarity of AT and TCA by estimating the relative explanatory power of the two frameworks for each of the two decisions. On the one hand, we find support for most of the established hypotheses. However, the hypothesized effect of uncertainty is rejected in our data set. Moreover, we document the impact of some new variables. We also find that, while AT does not add much to explain the decision of direct vs. rep in our data, TCA is equally limiting in helping understand the design of salesforce compensation plans. Therefore, one has to be cautious in treating AT and TCA as complementary theories.

The benefits of effectively managing a salesforce have never been greater. For almost all firms, sales is the only revenue-generating part of the organization, while everything else is a cost center. Moreover, with the increasing emphasis on market orientation in today's environment, the role of the salesforce has assumed greater importance. However, the costs of using a direct salesforce are escalating by the day, with the average cost of making a personal sales call ranging from $250 to $500 in the USA (Kotler, 2003, p. 638) and from €150 to €400 in Germany (Kienbaum Vergütungsberatung, 2002). Furthermore, firms in the USA spend over a trillion $ annually on salesforces and salesforce materials (Kotler, 2003, p. 637). It is therefore imperative that this asset be used in the most effective and efficient manner. An important aspect of managing a salesforce is related to its design. Depending on the tasks that need to be performed by the salesforce including prospecting, communicating, selling, servicing and information gathering, a firm needs to decide whether it should have a company salesforce (direct) or utilize independent sales representatives (reps). Furthermore, if a company decides to employ a direct salesforce, it needs to design the control and reward systems so as to achieve an optimal utilization of its salesforce's efforts. By now, it is well recognized that a salesperson's performance depends not only on individual-specific factors, but also on the reward system used to motivate a salesforce (see Johnston & Marshall, 2003, p. 13). Hence, in the salesforce management literature many efforts have been made to study salesforce compensation plans (see Basu et al., 1985, Coughlan & Narasimhan, 1992, Dearden & Lilien, 1990, John & Weitz, 1989, Joseph & Kalwani, 1995, Joseph & Thevaranjan, 1998, Lal et al., 1994, Lal & Srinivasan, 1993, Lal & Staelin, 1986, Raju & Srinivasan, 1996, Weinberg, 1975 and Zhang & Mahajan, 1995). See also the reviews by Albers, 1996 and Albers, 2002, Coughlan (1993) and Coughlan and Sen (1989). Two of the most popular theoretical frameworks used to study the decision of reps vs. company owned salesforce and design of compensation plans are Transaction Cost Analysis (TCA) and Agency Theory (AT). While researchers such as Anderson (1985) use TCA to study the choice between sales reps and direct salesforce, John and Weitz (1989) use TCA to study the design of compensation plans. On the other hand, Basu et al. (1985), Lal and Srinivasan (1993), Lal and Staelin (1986), Rao (1990), and Zhang and Mahajan (1995) apply Agency Theory to study the design of compensation plans. In this paper, our primary objective is to compare the relative usefulness of Agency Theory and Transaction Cost Analysis in the context of each of these two decisions. Although these two frameworks appear to be complementary, our investigation is motivated by the fact that TCA was originally advanced to understand and study issues related to the boundaries of the firm (for example, make or buy decisions of a firm), while AT has been proposed to understand the contractual arrangements between a firm and its employees. This suggests that TCA should provide a relatively better understanding of the direct vs. rep decision while AT may be more appealing in the context of compensation plans. However, if a common test of TCA- and AT-specific variables leads to the finding that both theories significantly explain the vertical integration as well as contractual issues, this would extend the usual set of variables applied in empirical investigations and those taken into consideration by managers. Our secondary objective is to propose and test the validity of several new hypotheses related to the issues of vertical integration and design of compensation plans. As a side-effect, we also investigate the generalizability of the empirical findings reported in the literature to countries outside the USA. This is important, since it is known that different cultures favor different attitudes towards work, use different types of communication and operate in varying legal environments (Albers, Krafft, & Bielert 1998). We therefore investigate the usefulness of the above-mentioned theoretical frameworks in international contexts. In the following, we briefly review in Section 2 the relevant literature on TCA and AT in the sales force compensation domain, and develop a set of hypotheses with respect to both the decision to employ a rep organization vs. direct salesforce and the structure of the compensation plan. In Section 3, we describe the operationalization of our measures and the research design of our integrated empirical study. Section 4 presents the empirical results of the explanation of the vertical integration decision, while Section 5 provides the results for the salary vs. incentives decision. Section 6 offers a comparison of the explanatory power of TCA and AT for the vertical integration and compensation design decisions. The article concludes with a summary and some suggested directions for future research.

This study provides the first test of an integrated set of factors from Transaction Cost Analysis and Agency Theory, through a data set collected outside the USA. We thereby provide the first test of both these frameworks within a single database. Moreover, by collecting the data in Germany, we are able to address the issue of the generalizability of the findings in the USA. Indeed, since many of our findings are consistent with those reported in studies based on USA data, we are the first researchers to provide evidence that these frameworks may also be applied to situations outside the USA. Among the new findings in our study, we document the impact of some new variables and provide evidence disconfirming some effects reported in the literature. More specifically, we find that as predicted, increasing explainability of products and travel requirements increase the likelihood of employing a rep organization, while the availability of precise input reports favors employed salesforces. With respect to the design of compensation plans, we find that dhigh costs of measuring selling outcomesT, dprecise reports on activities availableT, dtravel requirementsT, and dproducts can easily be explainedT exert a direct positive impact on the proportion of salary in the total compensation plan. While the first three variables confirm our ATbased hypotheses, the last one is contrary to our TCA-specific hypothesis. We also find disconfirmatory evidence for several hypotheses that were either supported or not disconfirmed in recent studies. For example, we report that compensation plans include a higher fraction of salary when salespeople are easily replaceable. This is in contrast to the insignificant effects found by John and Weitz (1989). Similarly, the hypothesized effect of uncertainty (as measured by number of customers per salesperson) is rejected in our data set, while the results from the USA are mixed. With respect to the direct vs. rep decision, we find significant disconfirming effects for dsalespeople easily replaceableT, dsize of the salesforceT as well as duncertaintyT and significant confirming effects of dtravel requirementsT. This is in direct contrast to non-significant results reported by Anderson (1985) with respect to each of the last three variables. We further investigated the complementary nature of AT and TCA in Germany, by assessing the explanatory power of these two theories for the two decisions, direct vs. reps and proportion of salary in the compensation plan. We find that while one theory is better for explaining one phenomenon, the other is adequate in explaining the second phenomenon. More precisely, while TCA-specific variables do not add to explanatory power of the Agency Theory-specific variables in the salary decision, the Agency Theoryspecific variables do not add to the explanatory power of the TCA-specific variables in the decision to employ a direct vs. independent salesforce. We therefore believe that one has to be cautious in treating AT and TCA as complementary theories. With respect to directions for future research, this is the first study to assess the generalizability of the findings in the USA to other countries and cultures. Given our findings, it is useful to investigate further the impact of differences in legal environments, communication styles and work ethics on the generalizability of the TCA and AT frameworks. With respect to the usefulness of Agency Theory to study the design of compensation plans, we find that the existing analysis based on a model of homogeneous salesforces needs to be extended. In environments where salespeople differ along several dimensions, the interaction between the choice of compensation plan and the hiring decision can no longer be neglected. In other words, the choice of compensation plan needs to take into account not only the motivational aspects of this decision, but also the kind of salespeople that will be attracted to the company by the design of the compensation plan. A first such attempt has been offered in Lal and Staelin (1986) and Rao (1990).