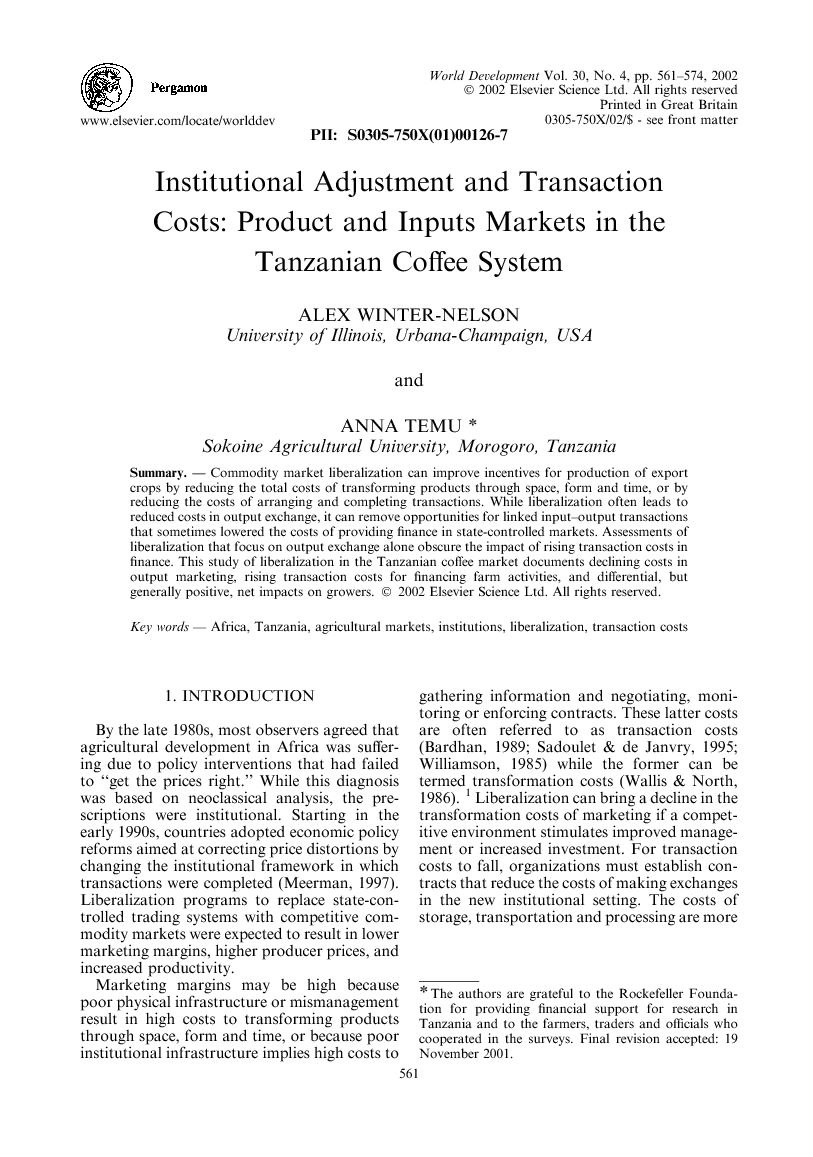 Commodity market liberalization can improve incentives for production of export crops by reducing the total costs of transforming products through space, form and time, or by reducing the costs of arranging and completing transactions. While liberalization often leads to reduced costs in output exchange, it can remove opportunities for linked input–output transactions that sometimes lowered the costs of providing finance in state-controlled markets. Assessments of liberalization that focus on output exchange alone obscure the impact of rising transaction costs in finance. This study of liberalization in the Tanzanian coffee market documents declining costs in output marketing, rising transaction costs for financing farm activities, and differential, but generally positive, net impacts on growers.

By the late 1980s, most observers agreed that agricultural development in Africa was suffering due to policy interventions that had failed to “get the prices right.” While this diagnosis was based on neoclassical analysis, the prescriptions were institutional. Starting in the early 1990s, countries adopted economic policy reforms aimed at correcting price distortions by changing the institutional framework in which transactions were completed (Meerman, 1997). Liberalization programs to replace state-controlled trading systems with competitive commodity markets were expected to result in lower marketing margins, higher producer prices, and increased productivity. Marketing margins may be high because poor physical infrastructure or mismanagement result in high costs to transforming products through space, form and time, or because poor institutional infrastructure implies high costs to gathering information and negotiating, monitoring or enforcing contracts. These latter costs are often referred to as transaction costs (Bardhan, 1989; Sadoulet & de Janvry, 1995; Williamson, 1985) while the former can be termed transformation costs (Wallis & North, 1986).1 Liberalization can bring a decline in the transformation costs of marketing if a competitive environment stimulates improved management or increased investment. For transaction costs to fall, organizations must establish contracts that reduce the costs of making exchanges in the new institutional setting. The costs of storage, transportation and processing are more readily quantified than the transaction costs, but Minten and Kyle (2000) demonstrate that search and negotiating costs can dominate the transformation expenses in agricultural markets. Recent work by Fafchamps and Minten (2001) suggests the importance of networks and institutions in reducing these costs. Market liberalization and the emergence of competitive trade could simultaneously reduce transformation costs and increase transaction costs if, for example, competition led to lower assembly and transportation expenses, but higher costs of negotiating and enforcing contracts. Moreover, because there are often many transactions in a commodity system, institutional changes that reduce the margins in one exchange may lead to higher transaction costs in related contracts and have an ambiguous impact on the system as a whole. Replacing a controlled system of interlinked credit, inputs and output exchange with distinct, competitive transactions could result in greater efficiency in output marketing, but higher transaction costs to financing the production. The need for policy reforms to generate lower transactions and transformation costs throughout the marketing chain is now recognized (Jayne & Jones, 1997; Poulton, Dorward, & Kydd, 1998; World Bank, 2000a), but empirical assessments of liberalization tend to focus on its impact on output marketing margins, output prices, or the structure of output markets (Badiene & Shively, 1998; Barrett, 1997; Jayne & Jones, 1997; Meerman, 1997; World Bank, Coffee Management Unit, 1994 and World Bank, Coffee Management Unit, 2000a). Less attention is given to costs in the inputs and financial markets, if they are assessed at all (Kherallah, Delgado, Gabre-Madhin, Minot, & Johnson, 2000; World Bank, 2000b). This paper provides a more complete view of the impact of liberalization on incentives by considering the costs of each exchange that farmers make when they engage in commercial production. Focusing on transaction costs, this paper examines developments in the Tanzanian coffee system since the market was liberalized in 1994. According to the New Institutional Economics, changes in an institutional framework should stimulate changes in contracts to minimize costs (Bardhan, 1989; Hubbard, 1997; North, 1990). After liberalization in Tanzania, organizations did develop new contracts to lower transaction costs in the new institutional environment. Moreover, the initial change in institutions stimulated further endogenous institutional innovations as private and public sector participants sought rules and guidelines to structure the market. The analysis reveals that the costs of marketing output fell substantially with liberalization, but the transaction costs associated with financing production rose. These shifting transaction costs resulted in differential impacts across producers. While the great majority of coffee growers appear to have benefited on balance, a minority of growers may have lost more from increasing costs of finance than they gained from reduced costs in product marketing.

Market liberalization can enhance agriculture if it reduces the costs associated producing output and moving it from farm to final market. Whereas most attention has been focused on reducing margins associated with output exchange, marketing costs must be reduced through the entire commodity system if liberalization is to yield benefits. When credit, input and output markets have been linked under a controlled system, market liberalization is likely to lower costs of output exchange while raising transaction costs in the financial market. Increases in the share of world prices accruing to African farmers readily confirm reduced costs in output markets (Kherallah et al., 2000; World Bank, 1994), but changes in transaction costs in the exchanges for inputs and finance remain difficult to quantify. After liberalization of the Tanzanian coffee market, organizations formed new contracts to reduce costs in the new institutional setting. These contracts included vertical integration of exporters into assembly and processing which generated reductions in the marketing costs for output, but increases in the transaction costs for financing production. The combination of prices, costs, and yields that obtained in Tanzania during 1994–2000 implied that most farmers gained from the mix of lower output marketing margins and reduced access to finance. Only those growers who simultaneously experienced exceptionally low yields, remained in relatively high-cost marketing channels, and had no access to finance or had finance only at a exceptionally high opportunity cost could have been net losers from the change. In this survey, the potential losses of the relatively small number of disadvantaged growers appear small compared to the gains enjoyed by the majority of growers. But, increased costs of securing farm finance have placed a drag on the returns to liberalization for all growers and indicate an area for further policy attention. Policy reform that affects the rules by which prices are determined is simultaneously price and institutional reform. Its success often depends on the capacity for organizations to reduce their transformation and transaction costs given the new institutional setting. Competitive pressures in a liberalized system are likely to reduce the costs of output marketing, but when liberalization separates linked inputs, finance, and output exchanges it may increase transaction costs at other points in the commodity chain. To assess the impact of liberalization, the transaction costs through the entire system must be measured. Conclusions based on reduced costs at any one exchange can misrepresent the actual impact of reforms and obscure the need for further institutional change or policy inter vention.