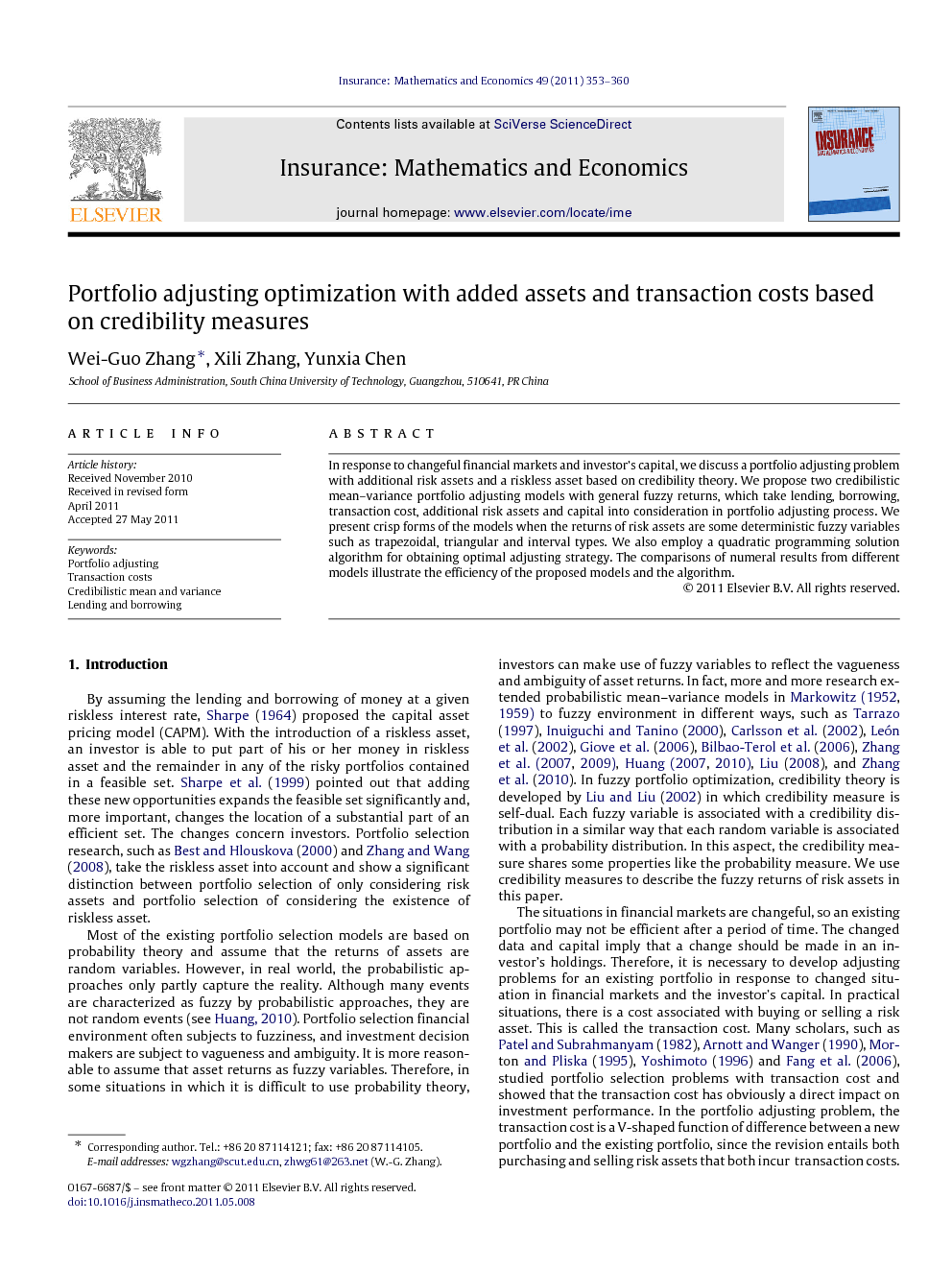 In response to changeful financial markets and investor’s capital, we discuss a portfolio adjusting problem with additional risk assets and a riskless asset based on credibility theory. We propose two credibilistic mean–variance portfolio adjusting models with general fuzzy returns, which take lending, borrowing, transaction cost, additional risk assets and capital into consideration in portfolio adjusting process. We present crisp forms of the models when the returns of risk assets are some deterministic fuzzy variables such as trapezoidal, triangular and interval types. We also employ a quadratic programming solution algorithm for obtaining optimal adjusting strategy. The comparisons of numeral results from different models illustrate the efficiency of the proposed models and the algorithm.

By assuming the lending and borrowing of money at a given riskless interest rate, Sharpe (1964) proposed the capital asset pricing model (CAPM). With the introduction of a riskless asset, an investor is able to put part of his or her money in riskless asset and the remainder in any of the risky portfolios contained in a feasible set. Sharpe et al. (1999) pointed out that adding these new opportunities expands the feasible set significantly and, more important, changes the location of a substantial part of an efficient set. The changes concern investors. Portfolio selection research, such as Best and Hlouskova (2000) and Zhang and Wang (2008), take the riskless asset into account and show a significant distinction between portfolio selection of only considering risk assets and portfolio selection of considering the existence of riskless asset. Most of the existing portfolio selection models are based on probability theory and assume that the returns of assets are random variables. However, in real world, the probabilistic approaches only partly capture the reality. Although many events are characterized as fuzzy by probabilistic approaches, they are not random events (see Huang, 2010). Portfolio selection financial environment often subjects to fuzziness, and investment decision makers are subject to vagueness and ambiguity. It is more reasonable to assume that asset returns as fuzzy variables. Therefore, in some situations in which it is difficult to use probability theory, investors can make use of fuzzy variables to reflect the vagueness and ambiguity of asset returns. In fact, more and more research extended probabilistic mean–variance models in Markowitz, 1952 and Markowitz, 1959 to fuzzy environment in different ways, such as Tarrazo (1997), Inuiguchi and Tanino (2000), Carlsson et al. (2002), León et al. (2002), Giove et al. (2006), Bilbao-Terol et al. (2006), Zhang et al., 2007 and Zhang et al., 2009, Huang, 2007 and Huang, 2010, Liu (2008), and Zhang et al. (2010). In fuzzy portfolio optimization, credibility theory is developed by Liu and Liu (2002) in which credibility measure is self-dual. Each fuzzy variable is associated with a credibility distribution in a similar way that each random variable is associated with a probability distribution. In this aspect, the credibility measure shares some properties like the probability measure. We use credibility measures to describe the fuzzy returns of risk assets in this paper. The situations in financial markets are changeful, so an existing portfolio may not be efficient after a period of time. The changed data and capital imply that a change should be made in an investor’s holdings. Therefore, it is necessary to develop adjusting problems for an existing portfolio in response to changed situation in financial markets and the investor’s capital. In practical situations, there is a cost associated with buying or selling a risk asset. This is called the transaction cost. Many scholars, such as Patel and Subrahmanyam (1982), Arnott and Wanger (1990), Morton and Pliska (1995), Yoshimoto (1996) and Fang et al. (2006), studied portfolio selection problems with transaction cost and showed that the transaction cost has obviously a direct impact on investment performance. In the portfolio adjusting problem, the transaction cost is a V-shaped function of difference between a new portfolio and the existing portfolio, since the revision entails both purchasing and selling risk assets that both incur transaction costs. Moreover, in a real portfolio selection problem, investors do not only purchase or sell risk assets, but also lend or borrow a riskless asset (capital) at different interest rates. The purpose of this paper is to discuss the portfolio adjusting problem based on credibility theory in response to changed data and capital. We use credibilistic expected value of fuzzy returns as the investment return and credibilistic variance as the risk. Different from Huang (2007) and Zhang et al. (2010), we discuss complex situations with additional risk assets and a riskless asset (capital) with different interest rates on lending and borrowing in portfolio adjusting process. Also, we consider the buying or selling transaction costs for the existing risk assets and the buying transaction costs for the additional risk assets. The rest of the paper is organized as follows. In Section 2, we introduce the definitions of credibility expected return and credibilistic risk. Section 3 formulates two types of credibilistic portfolio adjusting models with or without borrowing when the returns of assets are general fuzzy variables. In Section 4, the proposed portfolio adjusting optimization models are converted to crisp forms for some deterministic fuzzy variable types. We also employ a quadratic programming solution algorithm for obtaining optimal strategy. In Section 5, a series of numeral examples are given to illustrate the effectiveness of the proposed models and algorithm. Finally, some concluding remarks are given in Section 6.

In the paper, we consider the adjusting problem for an existing portfolio in response to changed financial markets and investors capital. By taking the returns of risk assets as fuzzy variables, we use the credibilistic expected value and credibilistic variance to measure the return and risk of the assets. We present the credibilistic mean–variance model for portfolio adjusting with transaction costs, additional risk assets and a riskless asset. The proposed models in this paper can be regarded as an extension of the model discussed in Zhang et al. (2010). Furthermore, the models based on credibilistic theory are more useful to describe an uncertain investment environment with vagueness and ambiguity than the Markowitz models (1952, 1959). Under the assumption that the return of risk assets are some deterministic fuzzy variables, we convert the optimization models into crisp forms and employ a quadratic programming solver for obtaining optimal solutions. We give a series of examples to illustrate the impact of inclusion of additional risk assets, a riskless asset with lending or borrowing and transaction cost in portfolio adjusting. The computational results show that an investor’s risk-aversion determines the amount of lending or borrowing in a riskless asset. The more conservative the investor is, the more lending he or she selects. The more aggressive the investor is, the more borrowing he or she selects.