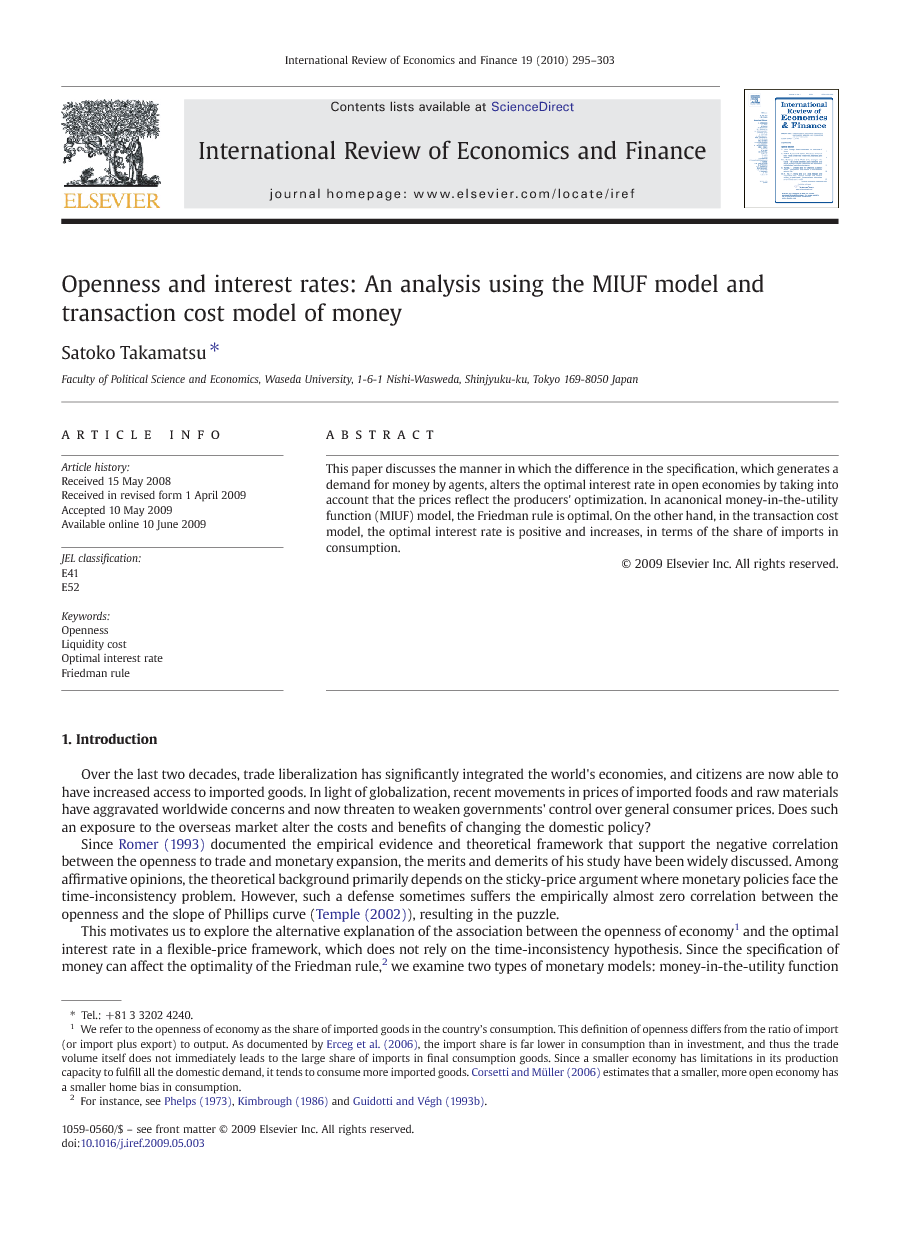 This paper discusses the manner in which the difference in the specification, which generates a demand for money by agents, alters the optimal interest rate in open economies by taking into account that the prices reflect the producers' optimization. In acanonical money-in-the-utility function (MIUF) model, the Friedman rule is optimal. On the other hand, in the transaction cost model, the optimal interest rate is positive and increases, in terms of the share of imports in consumption.

We have compared the MIUF model and the model of the transaction cost of money in open economies by extending the approach of Feenstra (1986). Our contributions in considering the transaction cost model are twofold: (1) providing one validation to assume a bliss point in the utility from money and (2) illustrating that the openness of economy makes the optimal interest rate positive even when there is no time-inconsistency issue. The violation of the qualitative equivalence of the models is based on transmission mechanisms that money affects the economy. In both the models, the accumulation of money facilitates the consumer's transaction and basically increases utility. At the same time, only in the transaction cost model, the decrease in the liquidity cost enables people to purchase the same quantity of real goods with a smaller expenditure. Such increased value of income encourages the labor supply and increases disutility. Therefore, the optimal size of the transaction cost balances these conflicting effects and yields a bliss point in the overall utility. Our analysis also demonstrates that the Friedman rule of zero nominal interest rate is optimal in the MIUF model, but not in the transaction cost model. In the MIUF model, since there is no mechanism through which the real balance affects other real allocations, imposing the opportunity cost of holding money is not optimal regardless of the openness to imports. On the other hand, in the latter model, the existence of import goods ameliorates the positive effect of decreasing interest rate on consumption. Since the labor supply is independent of the openness to import, the optimal interest rate is positive, which is higher than the case under autarky. In a real world, the effect of openness on the national economy can certainly be a hybrid of various factors. Our argument for the monetary contraction caused by the openness can coexist with the time-inconsistency hypothesis, such as Romer (1993), but is also applicable to economies with well-disciplined central banks. Since policymakers nowadays are generally believed to refrain from creating a monetary surprise, our prediction is important, especially in OECD countries. Empirical researches are called for in order to measure the degree to which our transaction cost hypothesis explains the overall monetary stance in each country. Another possibility for future research is to introduce the foreign currency as an alternative means of payment. Since the currency substitution might introduce another factor to impede the domestic policy, it is also interesting to see whether our results are modified in the presence of the use of foreign currency.