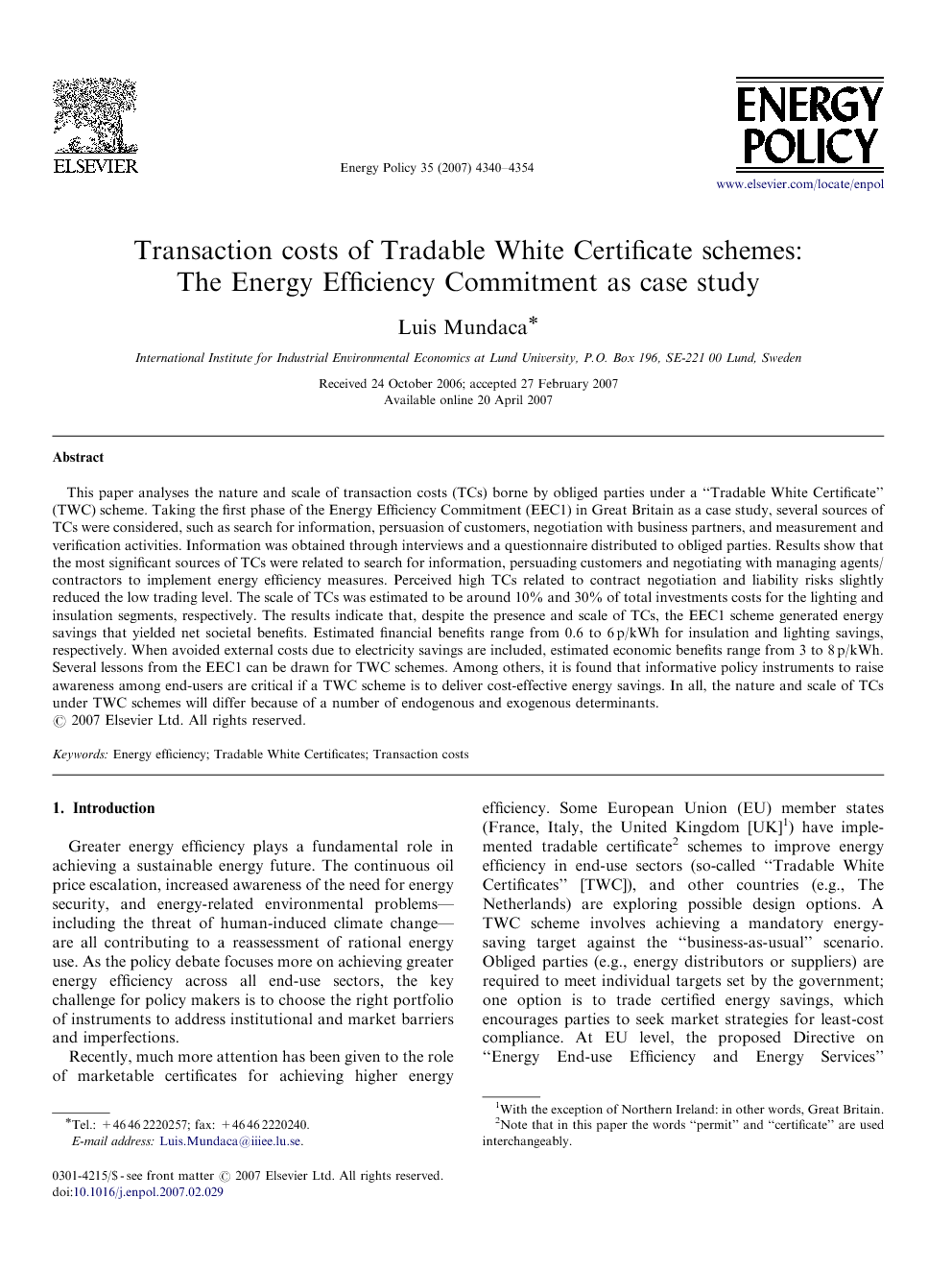 This paper analyses the nature and scale of transaction costs (TCs) borne by obliged parties under a “Tradable White Certificate” (TWC) scheme. Taking the first phase of the Energy Efficiency Commitment (EEC1) in Great Britain as a case study, several sources of TCs were considered, such as search for information, persuasion of customers, negotiation with business partners, and measurement and verification activities. Information was obtained through interviews and a questionnaire distributed to obliged parties. Results show that the most significant sources of TCs were related to search for information, persuading customers and negotiating with managing agents/contractors to implement energy efficiency measures. Perceived high TCs related to contract negotiation and liability risks slightly reduced the low trading level. The scale of TCs was estimated to be around 10% and 30% of total investments costs for the lighting and insulation segments, respectively. The results indicate that, despite the presence and scale of TCs, the EEC1 scheme generated energy savings that yielded net societal benefits. Estimated financial benefits range from 0.6 to 6 p/kWh for insulation and lighting savings, respectively. When avoided external costs due to electricity savings are included, estimated economic benefits range from 3 to 8 p/kWh. Several lessons from the EEC1 can be drawn for TWC schemes. Among others, it is found that informative policy instruments to raise awareness among end-users are critical if a TWC scheme is to deliver cost-effective energy savings. In all, the nature and scale of TCs under TWC schemes will differ because of a number of endogenous and exogenous determinants.

This study shows that despite the presence and magnitude of TCs, increased energy efficiency under the British TWC scheme was estimated to yield net financial and economic benefits.26 Taking into account negative externalities from electricity production as avoided costs and household energy prices as a benchmark, quantitative estimates indicate that the EEC1 benefited the society. Results showed that the search for information and persuasion of customers were relevant sources of TCs upstream in the EEC1. The findings suggest that a number of market barriers and imperfections contributed to this situation. For instance the split-incentive problem and asymmetric information among end-users could help explaining their low level of awareness. These results confirm the broader view needed when analysing TCs under TWC schemes, in particular upstream in the TWC life cycle. Not only can the trading phase be subject to TCs but the development of eligible measures leading to the issuance of TWC as such. Indeed, lessons from the EEC1 indicate that high effectiveness of informative policy instruments to raise awareness upstream among end-users is critical, if a TWC scheme is to deliver cost-effective energy savings. Downstream in the scheme, and to the surprise of many, the findings indicate that the low level of trading was slightly affected by perceived high TCs. With numerous benefits in their favour, suppliers having a surplus of energy savings were not enthusiastic about trading. The results indicate that the benefits of non-trading were higher than the potential costs of trading. However, a different scenario and market behaviour could have been seen if third parties—not only obliged parties—would have been allowed to participate in the trading. In fact, the design of the scheme heavily affected the liquidity of the market. In all, TCs under TWC schemes are very likely to differ because of a number of endogenous (e.g., design, coverage, programme requirements, data reliability) and exogenous determinants (e.g., market conditions, geographical context, portfolio of policy instruments) explaining and affecting the nature and scale. While further research remains to be done, lesson learnt from the EEC1 point to a number of strategies for reducing TCs during the life cycle of TWC in general. For instance, standardized full cost accounting systems—including TCs—project bundling, ex ante M&V approach, streamlined procedures, standardized trading contracts, and a trading platform should be evaluated and implemented accordingly.