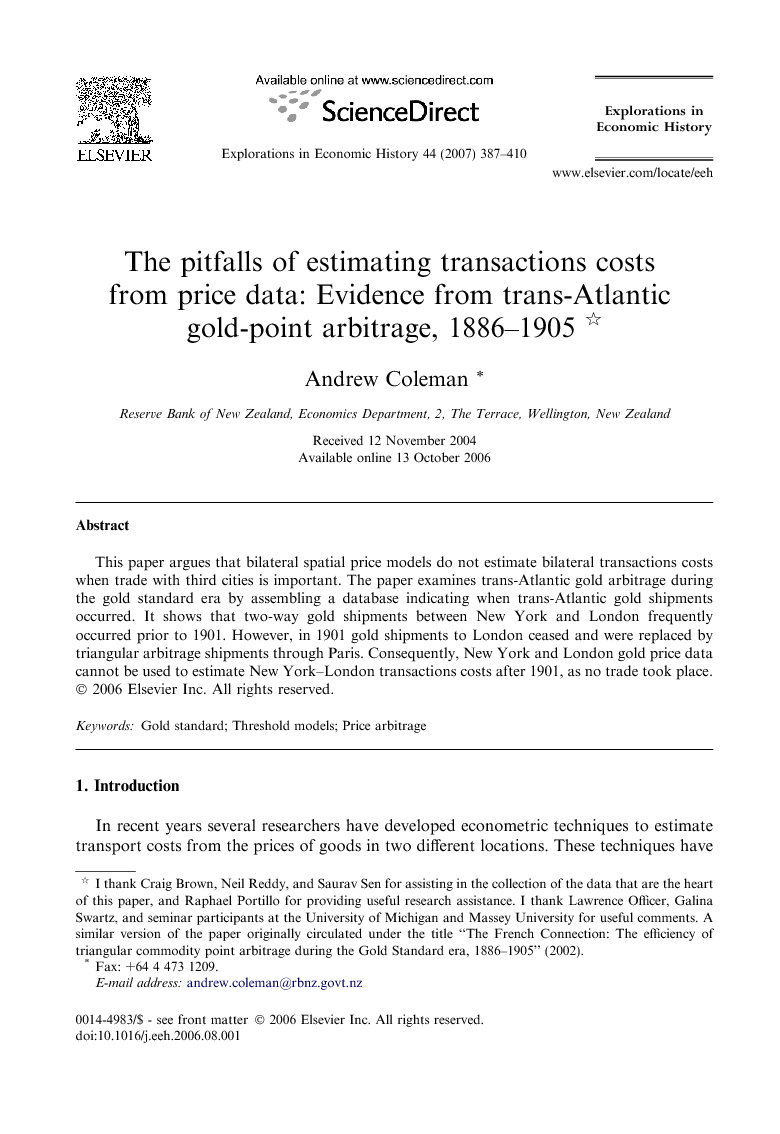 This paper argues that bilateral spatial price models do not estimate bilateral transactions costs when trade with third cities is important. The paper examines trans-Atlantic gold arbitrage during the gold standard era by assembling a database indicating when trans-Atlantic gold shipments occurred. It shows that two-way gold shipments between New York and London frequently occurred prior to 1901. However, in 1901 gold shipments to London ceased and were replaced by triangular arbitrage shipments through Paris. Consequently, New York and London gold price data cannot be used to estimate New York–London transactions costs after 1901, as no trade took place.

In recent years several researchers have developed econometric techniques to estimate transport costs from the prices of goods in two different locations. These techniques have been based upon theories of bilateral arbitrage in which it is assumed the maximum difference between prices in two locations depends on the cost of shipping goods from one location to another. Three well known examples of these techniques include the switching regression model of Spiller and Wood (1988a), the threshold autoregression model of Obstfeld and Taylor (1997), and the technique used by Engel and Rogers (1996) in which the variances of the price differences between two cities are compared to the distance between the cities. In this article, I question the identification strategy of these papers. These techniques are appropriate only if bilateral trade between a pair of cities occurs and trade with other centres does not occur. However, if trade with a third city regularly occurs, these estimation techniques are not identified. The problem can be simply illustrated with an example. Suppose one wanted to estimate shipping costs from New York to London. If third markets were unimportant, New York would export to London when the London price exceeded the New York price by the New York–London shipping cost, and the maximum price difference between the two cities should reflect this shipping cost. In these circumstances, the bilateral price data can be used to estimate the shipping costs. If it were always profitable for Paris to import from both cities, however, this reasoning is false. Rather, New York exporters would ensure the Paris price never exceeded the New York price by much more than the New York–Paris transport cost, and London exporters would ensure the Paris price never exceeded the London price by much more than the London–Paris transport cost. Consequently, the London price would never exceed the New York price by much more than the difference between the New York–Paris and the London–Paris transport costs, and no exports from New York to London would occur. If someone used a switching regression or a threshold autoregression to estimate transport costs from London and New York price data, they would estimate the difference between New York–Paris and the London–Paris shipping costs, not the true New York– London shipping cost. One way to circumvent this identification problem is to use trade data in conjunction with price data. If the occasions when one city exports to another are known, the prices in the two cities on these occasions can be used to estimate transport costs. Trade data are hardly ever used for this purpose, however, because they are difficult to obtain at the same frequency as price data. Nonetheless, such data may need to be procured if bilateral transactions costs cannot be identified from bilateral threshold models. This paper assembles a dataset covering a famous example of commodity arbitrage to demonstrate the difficulty of estimating transport costs from price data when third market effects are important. The example concerns the gold shipments between New York and London between 1885 and 1905, during the Gold Standard era. This example has been chosen partly because it has been widely studied—indeed, previous authors have used both switching regression techniques and threshold autoregression techniques to estimate transactions cost from price data—but mainly because it is possible to collect high frequency trade data to illustrate the problem. The paper establishes three main results: (i) prior to 1901, gold exports from New York to London frequently occurred and New York–London shipping costs can be estimated from these cities’ gold prices; (ii) after 1901, New York exported gold to Paris, not London, and New York–London shipping costs cannot be estimated from these cities’ gold prices; (iii) after 1901, the maximum price of sterling in New York was not determined by the costs of direct gold arbitrage from New York to London, as traditionally understood, but by the cost of indirect or triangular arbitrage through Paris. The change that occurred in 1901 can be traced to a change in the operating procedures of the Bank of France. Prior to 1900, the Bank of France sold foreign gold at a premium to the official rate, which raised the average price of sterling paper in Paris. In 1900 the Bank of France stopped charging this premium, which caused the average price of sterling in Paris to fall sharply, often to the point where gold exports from London to Paris were possible. This meant that when sterling was expensive in New York it was more profitable for arbitrageurs to export gold from New York to Paris and purchase cheap sterling paper in Paris to send to London than it was to export gold from New York directly to London. In turn, this meant the maximum price of sterling paper in New York never reached the level where it was profitable to export gold to London. The paper has a twin focus. One purpose of the paper is to demonstrate that bilateral econometric models cannot be used to estimate bilateral transport costs unless it is known that trade with third parties is unimportant. This point is made in a simple theoretical model in Section 2. The second purpose is to refine our understanding of the trans-Atlantic gold arbitrage process, by documenting the frequency and direction of trans-Atlantic gold arbitrage transactions. In Section 3, the dollar-sterling exchange rate market is outlined, and the data used in the paper are described. The data are used to estimate transactions costs between New York and London. In Section 4, the dates on which gold was shipped to Paris and Berlin as part of a triangular arbitrage operation are documented and used to estimate the cost of sending gold from New York to Paris as part of a triangular arbitrage transaction. In this section it is shown that the increasing prevalence of triangular arbitrage was associated with the change in the Bank of France gold premium policy. Finally, a general discussion including a comparison with earlier literature is offered in Section 5.

This study of gold arbitrage demonstrates that threshold models cannot be used to estimate the cost of making an arbitrage transaction unless it is known that third markets are unimportant. If third market effects are important, prices in two different cities will differ by an amount that depends on the difference between the transport costs between each of the two cities and the third city, as well as on the transport costs between the two cities. In these circumstances, the theoretical underpinnings of many econometric techniques including threshold autoregressions and switching regressions are suspect. While this point is easily made theoretically, the paper shows it can be important empirically. In particular, this paper shows that the cost of shipping gold from New York to London cannot be estimated from price data after 1901 as no exports from New York to London took place. Prior to 1901, the Paris and Berlin markets also affected the flow of gold between London and New York, but because there was a regular two way trade between New York and London transactions costs can be estimated from price data so long as trade data are used to indicate when a trade transaction occurred. It may be argued that this case is special, as the triangular arbitrage that linked New York, Paris, and London was conducted with financial instruments on the Paris–London leg. While this example is special, the basic theoretical point is clear: price differences between any two cities may reflect trade costs to a common import source or export destination. In any case, if sterling bills had not been sold in Paris, gold would have been shipped from London to Paris to complete the arbitrage transaction and the maximum price difference between London and New York would have been the New York–Paris transport cost minus the London–Paris transport cost. The other results of the paper are specific to the New York foreign exchange market during the Gold Standard era. The main contribution of this paper has been to identify the dates on which arbitrage shipments of gold between London and New York took place. Despite earlier skepticism about the reliability of the gold flow data, the weekly financial commentary of the Commercial and Financial Chronicle proved to be of sufficiently high quality that, in conjunction with other sources, the dates of direct shipments could be determined. The dates have proved useful for refining estimates of the gold points. The mean gold points in the periods 1886–1889 were (4.8370, 4.8925), while from 1897 to 1905 they were (4.8408, 4.8805). These estimates correspond to export transactions costs of 0.53% and 0.29%, respectively, while import transactions costs were 0.61% and 0.53%. The decline in export costs partly reflect inducements made by the Bank of England to attract gold. The estimates can be compared with previous estimates. Officer (1996, p. 174) constructed detailed cost estimates to estimate the transaction cost for shipping gold between New York and London. He estimated the normal cost of exporting gold from New York to be 0.66% in 1881–1890 and 1891–1900, and 0.50% for 1901–1910. His estimates for the normal transactions costs associated with importing gold were 0.71%, 0.63%, and 0.60% for the three decades. These estimates are comparable with those in this paper, although typically a little bit higher. The difference between his estimates and those in this paper reflect the different methodological concerns. Officer estimated the normal average cost to make an arbitrage transaction, whereas in this paper I estimate the actual cost on the occasions that transactions occurred. Some of these occasions would have been ordinary arbitrage; others would have been gold effected transfers; still others occurred when the Bank of England was altering the price of gold or making special inducements to shippers; in sum, they are unlikely to be exactly the same as the normal cost. The comparison with the econometric estimates of Spiller and Wood (1988b) and Prakash and Taylor (1997) provide an interesting test of their methodologies, because neither paper takes into account the possibility of triangular arbitrage. Spiller and Wood estimated a two-limit stochastic Tobit model with separate costs for import and export transactions over the period 1899–1908. They estimated mean export costs to be 0.23–0.25%, while mean import costs were 0.28–0.38%, with the estimates varying slightly according to different modeling methodologies. Prakash and Taylor estimated a symmetric threshold autoregression, over different sub-periods; for both 1899–1901 and 1901–1904, transactions costs were estimated to be 0.31%. In contrast, the estimates in this paper suggest that imports took place when the exchange rate averaged 0.53% below mint parity, that direct exports took place when the exchange rate averaged 0.29% above mint parity, and that triangular exports took place when the exchange rate averaged 0.18% above mint parity. The Spiller and Wood estimate of the mean export transactions cost is therefore midway between the cost of triangular and direct exports, while their estimate of import costs is substantially lower than the mean value of the exchange rate at which imports took place. (Note, however, that the periods are not identical.) The Prakash and Taylor estimates are very close to average of the import and the two export transactions costs. It is thus plausible that these estimation techniques underestimated the true cost of shipping gold between New York and London, because they ignored the effect of triangular arbitrage on the New York sterling exchange rate. Unfortunately, such bias is likely whenever bilateral transactions costs are estimated from bilateral price data and third markets are important.