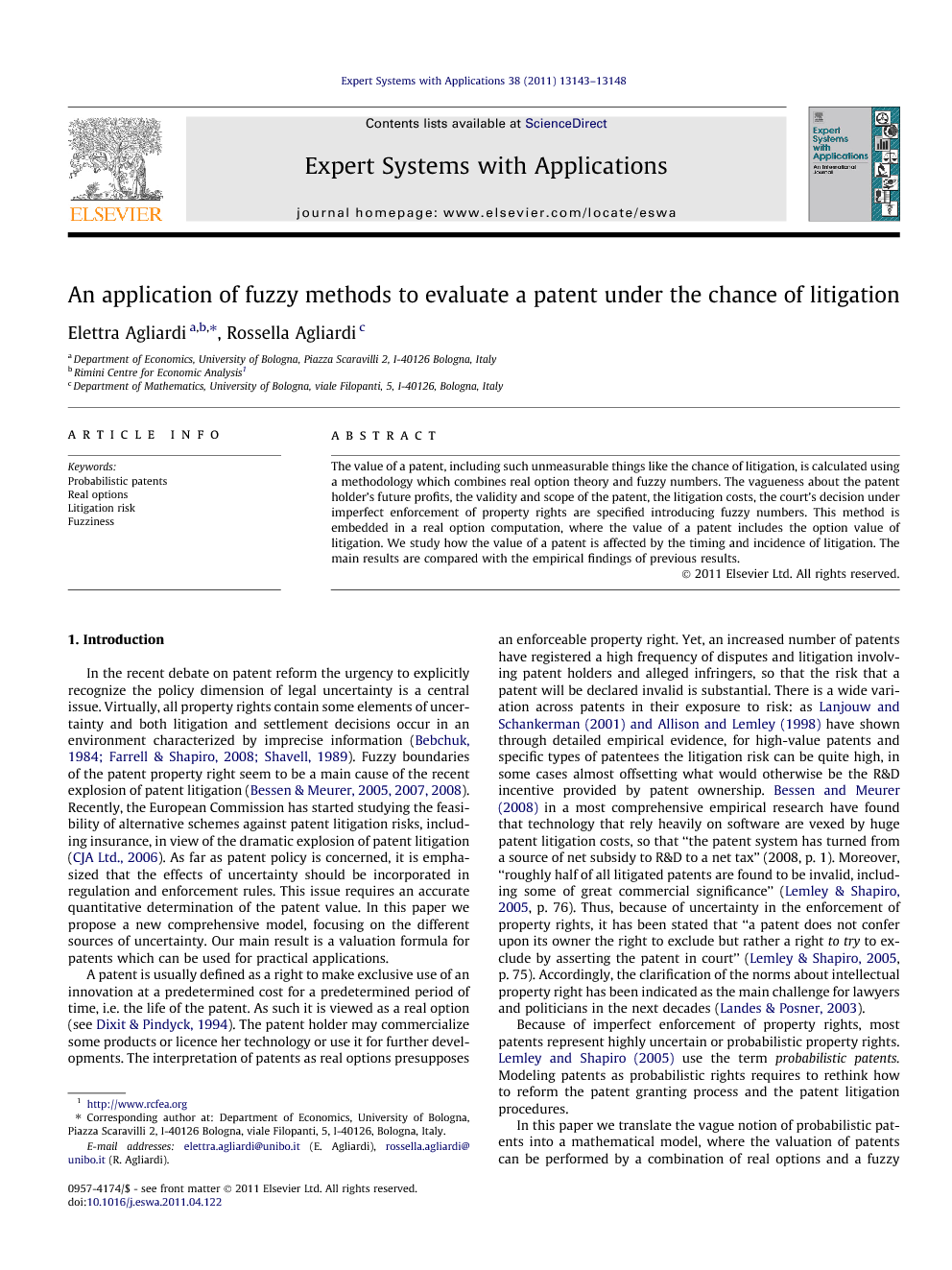 The value of a patent, including such unmeasurable things like the chance of litigation, is calculated using a methodology which combines real option theory and fuzzy numbers. The vagueness about the patent holder’s future profits, the validity and scope of the patent, the litigation costs, the court’s decision under imperfect enforcement of property rights are specified introducing fuzzy numbers. This method is embedded in a real option computation, where the value of a patent includes the option value of litigation. We study how the value of a patent is affected by the timing and incidence of litigation. The main results are compared with the empirical findings of previous results.

The notion of probabilistic patents requires a deep understanding of patent risk and an appropriate way of modeling the different sources of uncertainty, regarding both the commercial significance of the invention being patented and the validity and scope of the legal right being granted. Recent debates on the appropriate methods for calculating infringement damages have engaged the patent community: actually, patent litigation is one piece of the patent reform puzzle. In this paper we provide a valuation formula for patents within a framework that combines a real option to litigate with a fuzzy methodology and give a specific characterization of legal uncertainty. Our model is consistent with the view that the strength of patent protection and the presence of more codified and defined boundaries are crucial determinants of the patent value, the probability of licensing and patent validity. A comprehensive model and the resulting valuation formula can have significant implications for patent policies. To the extent that the effects of uncertainty and enforcement are neglected in patent policy, incentives for innovation may become inconsistent, issues of patent invalidity arbitrary and the economic cost of patent litigation will be exacerbated. The contribution of uncertainty to total patent value and its effect on the litigation decisions need to be taken into account to set a good patent system and make it an effective tool for providing positive incentives. In this paper we have pointed out a few relevant differences with respect to traditional real option modeling of patents. These are due to imprecise information about the driving parameters, that is, the probability of successful litigation, the gains from successful infringement suits or patent challenges, the litigation costs. A realistic estimate of these parameter values, which our model makes possible, is necessary to ensure that patent policy will be effective.