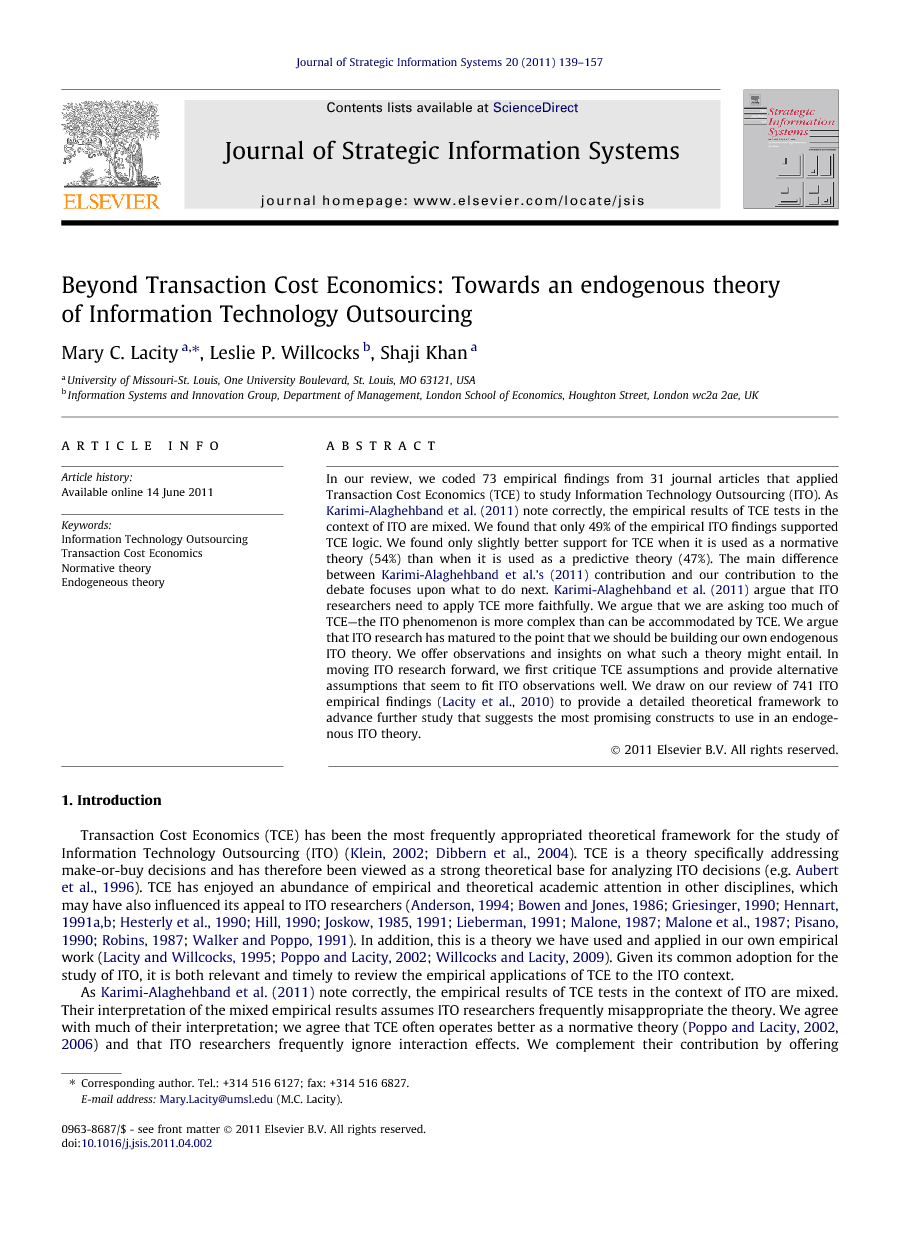 In our review, we coded 73 empirical findings from 31 journal articles that applied Transaction Cost Economics (TCE) to study Information Technology Outsourcing (ITO). As Karimi-Alaghehband et al. (2011) note correctly, the empirical results of TCE tests in the context of ITO are mixed. We found that only 49% of the empirical ITO findings supported TCE logic. We found only slightly better support for TCE when it is used as a normative theory (54%) than when it is used as a predictive theory (47%). The main difference between Karimi-Alaghehband et al.’s (2011) contribution and our contribution to the debate focuses upon what to do next. Karimi-Alaghehband et al. (2011) argue that ITO researchers need to apply TCE more faithfully. We argue that we are asking too much of TCE—the ITO phenomenon is more complex than can be accommodated by TCE. We argue that ITO research has matured to the point that we should be building our own endogenous ITO theory. We offer observations and insights on what such a theory might entail. In moving ITO research forward, we first critique TCE assumptions and provide alternative assumptions that seem to fit ITO observations well. We draw on our review of 741 ITO empirical findings (Lacity et al., 2010) to provide a detailed theoretical framework to advance further study that suggests the most promising constructs to use in an endogenous ITO theory.

Transaction Cost Economics (TCE) has been the most frequently appropriated theoretical framework for the study of Information Technology Outsourcing (ITO) (Klein, 2002 and Dibbern et al., 2004). TCE is a theory specifically addressing make-or-buy decisions and has therefore been viewed as a strong theoretical base for analyzing ITO decisions (e.g. Aubert et al., 1996). TCE has enjoyed an abundance of empirical and theoretical academic attention in other disciplines, which may have also influenced its appeal to ITO researchers (Anderson, 1994, Bowen and Jones, 1986, Griesinger, 1990, Hennart, 1991a, Hennart, 1991b, Hesterly et al., 1990, Hill, 1990, Joskow, 1985, Joskow, 1991, Lieberman, 1991, Malone, 1987, Malone et al., 1987, Pisano, 1990 and Robins, 1987; Walker and Poppo, 1991). In addition, this is a theory we have used and applied in our own empirical work (Lacity and Willcocks, 1995, Poppo and Lacity, 2002 and Willcocks and Lacity, 2009). Given its common adoption for the study of ITO, it is both relevant and timely to review the empirical applications of TCE to the ITO context.

Transaction Cost Economics has been the most frequently appropriated theory for the study of IT outsourcing (Dibbern et al., 2004 and Klein, 2002). In this review, we found that hypotheses derived from TCE for the constructs External Production Cost Advantage and Transaction Costs have received strong empirical support in the ITO context. We seem to have generated enough evidence across multiple studies to at least understand the effects of these two independent variables within the ITO context. However, many TCE transaction attributes including Asset Specificity, Uncertainty, Measurement Difficulty, and Transaction Frequency have produced mixed results. To interpret TCE anomalies, we have documented how ITO researchers question their own measures and methods, argue that ITO is distinctive, or propose that alternate reference theories better explain ITO findings. We have discussed that ITO researchers are not alone in finding mixed results. Prior reviews of TCE in non-ITO contexts also report mixed results (e.g. Bowen and Jones, 1986, Carter and Hodgson, 2006 and Macher and Richman, 2008). We have urged authors to consider what the vast amount of empirical research tells us about ITO decisions in terms of operating assumptions and the most important determinants of ITO decisions and ITO outcomes.