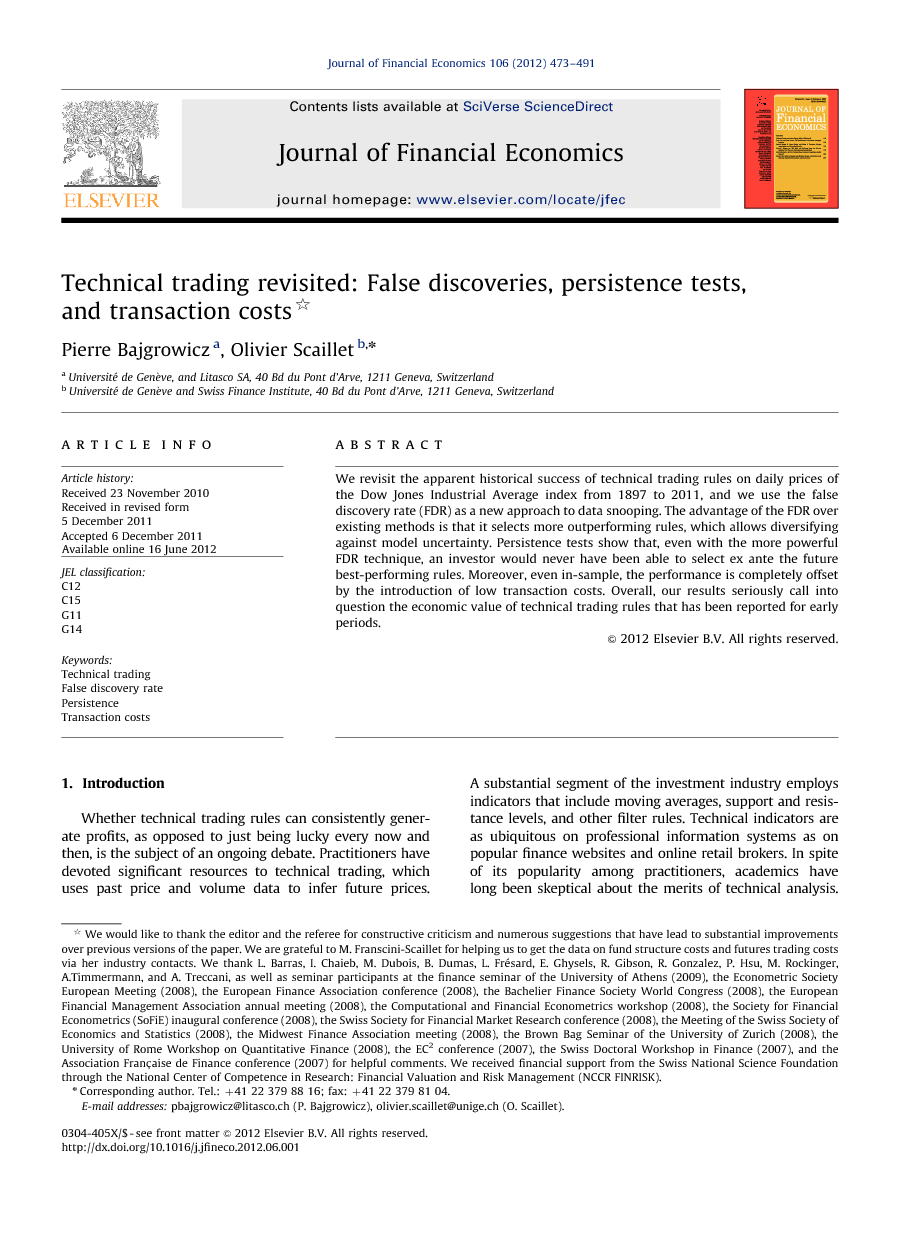 We revisit the apparent historical success of technical trading rules on daily prices of the Dow Jones Industrial Average index from 1897 to 2011, and we use the false discovery rate (FDR) as a new approach to data snooping. The advantage of the FDR over existing methods is that it selects more outperforming rules, which allows diversifying against model uncertainty. Persistence tests show that, even with the more powerful FDR technique, an investor would never have been able to select ex ante the future best-performing rules. Moreover, even in-sample, the performance is completely offset by the introduction of low transaction costs. Overall, our results seriously call into question the economic value of technical trading rules that has been reported for early periods.

Whether technical trading rules can consistently generate profits, as opposed to just being lucky every now and then, is the subject of an ongoing debate. Practitioners have devoted significant resources to technical trading, which uses past price and volume data to infer future prices. A substantial segment of the investment industry employs indicators that include moving averages, support and resistance levels, and other filter rules. Technical indicators are as ubiquitous on professional information systems as on popular finance websites and online retail brokers. In spite of its popularity among practitioners, academics have long been skeptical about the merits of technical analysis. They argue that it is inconsistent with the theory of market efficiency, which states that all available information must be reflected in security prices. In hopes of resolving this conflict, researchers have undertaken numerous empirical studies of technical trading rules. Some have found results in favor of the ability of trading rules to deliver superior returns, e.g., Neftci (1991), Brock, Lakonishok, and LeBaron (BLL, 1992)Neely, Weller, and Dittmar (1997), Sullivan, Timmermann, and White (STW, 1999)Lo, Mamaysky, and Wang (2000), and Kavajecz and Odders-White (2004). Other studies conclude that trading rules cannot be used to predict future prices. For example, Fama and Blume (1966), Bessembinder and Chan (1998), Allen and Karjalainen (1999), and Ready (2002) show that transaction costs outweigh the predictive power of trading rules. In addition to the impact of transaction costs, researchers have warned against the danger of data snooping which raises the possibility that the reported results are spurious. Menkhoff and Taylor (2007) provide an extensive review of the literature on the use of technical analysis in foreign exchange markets.

Previous studies, e.g., BLL and STW, have reported examples of technical trading rules generating superior returns, at least during early time periods. Based on such results observed ex post, they have concluded that trading rules were useful to deliver profits. In our paper, we reassess this apparent historical success. First, we propose a new approach to select outperforming rules while accounting for data snooping based on the false discovery rate. The FDR method is designed to control false positives, i.e., conclusions that something is statistically significant when it is entirely random. Our Monte Carlo simulations calibrated to our empirical study and taking into account serial and cross-sectional dependencies confirm that the FDR approach is more powerful and better suited than statistical methods used in previous studies. It allows for selecting more rules and diversifying against model uncertainty. Methods derived from the BRC are by construction unable to select further rules once they find a rule whose performance is due to luck. As our simulations illustrate, it is very likely that a rule with no real predictive power achieves by luck a performance better than the majority of the true outperforming rules.