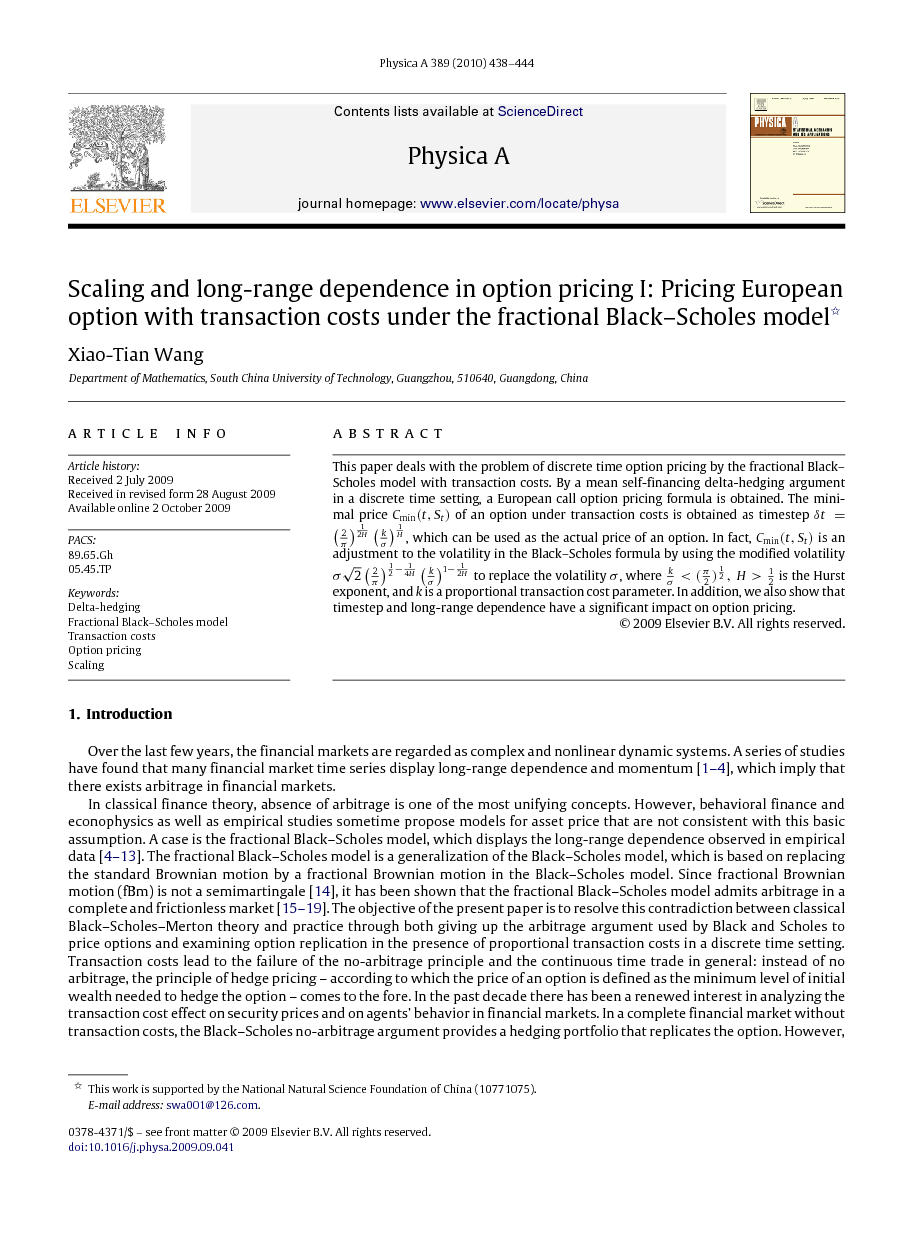 Over the last few years, the financial markets are regarded as complex and nonlinear dynamic systems. A series of studies have found that many financial market time series display long-range dependence and momentum [1], [2], [3] and [4], which imply that there exists arbitrage in financial markets. In classical finance theory, absence of arbitrage is one of the most unifying concepts. However, behavioral finance and econophysics as well as empirical studies sometime propose models for asset price that are not consistent with this basic assumption. A case is the fractional Black–Scholes model, which displays the long-range dependence observed in empirical data [4], [5], [6], [7], [8], [9], [10], [11], [12] and [13]. The fractional Black–Scholes model is a generalization of the Black–Scholes model, which is based on replacing the standard Brownian motion by a fractional Brownian motion in the Black–Scholes model. Since fractional Brownian motion (fBm) is not a semimartingale [14], it has been shown that the fractional Black–Scholes model admits arbitrage in a complete and frictionless market [15], [16], [17], [18] and [19]. The objective of the present paper is to resolve this contradiction between classical Black–Scholes–Merton theory and practice through both giving up the arbitrage argument used by Black and Scholes to price options and examining option replication in the presence of proportional transaction costs in a discrete time setting. Transaction costs lead to the failure of the no-arbitrage principle and the continuous time trade in general: instead of no arbitrage, the principle of hedge pricing–according to which the price of an option is defined as the minimum level of initial wealth needed to hedge the option–comes to the fore. In the past decade there has been a renewed interest in analyzing the transaction cost effect on security prices and on agents’ behavior in financial markets. In a complete financial market without transaction costs, the Black–Scholes no-arbitrage argument provides a hedging portfolio that replicates the option. However, the Black–Scholes hedging portfolio requires continuous trading and therefore, in a market with propositional transaction costs, it is expensive. In fact, in such a market, as Leland mentioned in 1985 [20], there is no portfolio that replicates the European call option and we are forced to relax the hedging condition, requiring the portfolio only to replicate the value of option at discrete times. Furthermore, as Leland pointed out, the arbitrage argument used by Black and Scholes to price options no longer can be used: because replicating the option by dynamic strategy would be infinitely costly, no effective option bounds are implied [20]. On the other hand, from the point of view of behavioral finance it is also reasonable that no-arbitrage argument is discarded [21] and [22]. Finally, as mentioned in the paper [23], in most models of stock fluctuations, except for very special cases, risk in option trading cannot be eliminated and strict arbitrage opportunities do not exist, whatever be the price of the option. The risk cannot be eliminated is furthermore the fundamental reason for the very existence of option markets. The paper’s outline is as follows: in Section 2 the option pricing problem on the fractional Black–Scholes model with transaction costs is considered and the scaling behavior of option pricing is analyzed. A specific example of the European call option is studied and a closed form representation of the option pricing formula is given. In Section 3, a conclusion is given.