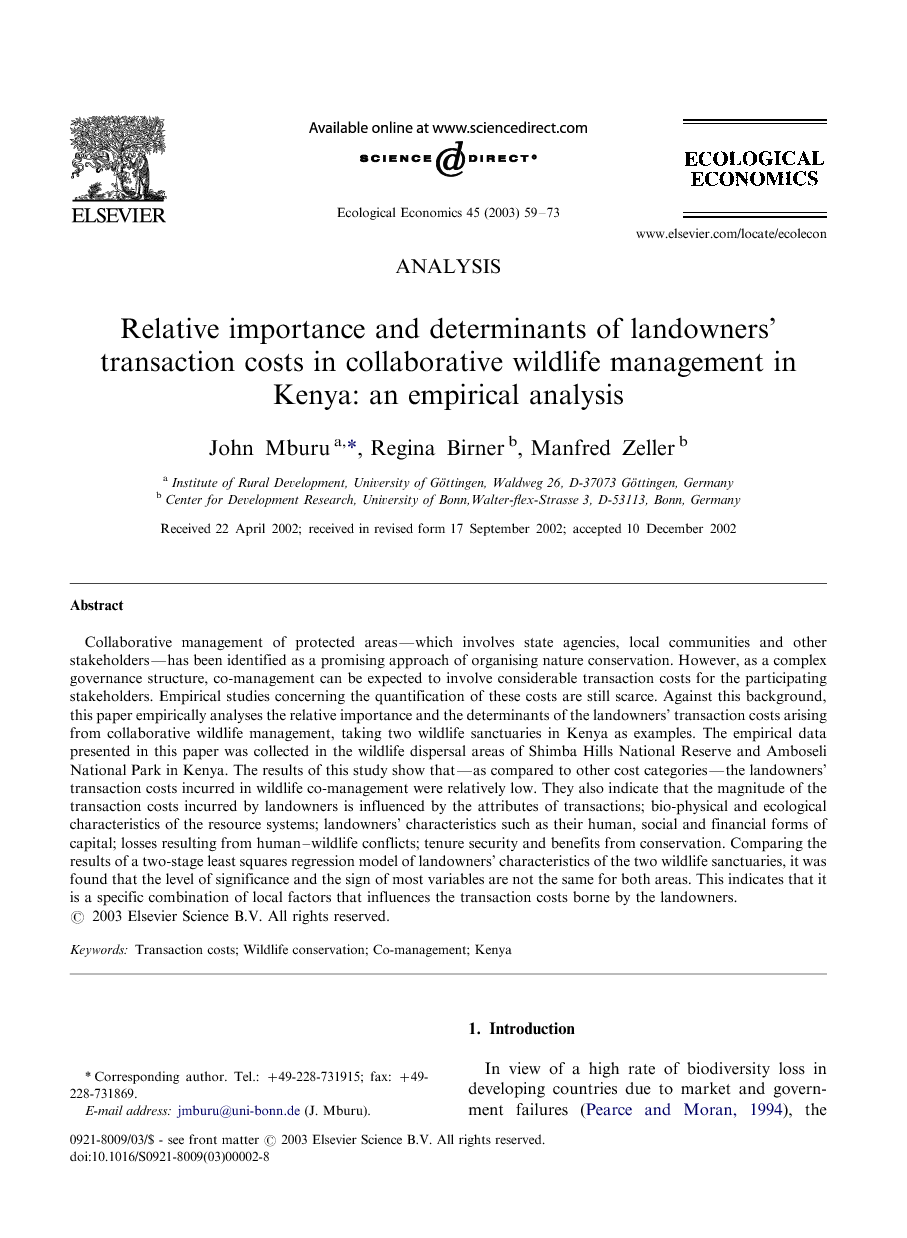 Collaborative management of protected areas—which involves state agencies, local communities and other stakeholders—has been identified as a promising approach of organising nature conservation. However, as a complex governance structure, co-management can be expected to involve considerable transaction costs for the participating stakeholders. Empirical studies concerning the quantification of these costs are still scarce. Against this background, this paper empirically analyses the relative importance and the determinants of the landowners’ transaction costs arising from collaborative wildlife management, taking two wildlife sanctuaries in Kenya as examples. The empirical data presented in this paper was collected in the wildlife dispersal areas of Shimba Hills National Reserve and Amboseli National Park in Kenya. The results of this study show that—as compared to other cost categories—the landowners’ transaction costs incurred in wildlife co-management were relatively low. They also indicate that the magnitude of the transaction costs incurred by landowners is influenced by the attributes of transactions; bio-physical and ecological characteristics of the resource systems; landowners’ characteristics such as their human, social and financial forms of capital; losses resulting from human–wildlife conflicts; tenure security and benefits from conservation. Comparing the results of a two-stage least squares regression model of landowners’ characteristics of the two wildlife sanctuaries, it was found that the level of significance and the sign of most variables are not the same for both areas. This indicates that it is a specific combination of local factors that influences the transaction costs borne by the landowners.

In view of a high rate of biodiversity loss in developing countries due to market and government failures (Pearce and Moran, 1994), the devolution of responsibility for natural resource management to local organisations has gained increasing importance in recent years. One important management system that has emerged as a consequence of the devolution processes is collaborative management (in short, co-management) in which the state retains a substantial role in resource management, while at the same time the role of the local resource users or landowners is expanded (Meinzen-Dick and Knox, 2001, p. 41). Co-management arrangements shift, to a variable extent, the control, administration and enforcement of agreements from the government to the local communities. Other stakeholders such as NGOs and private agencies are also often included, either as facilitators or as formal partners in collaborative arrangements. The shift of responsibility can greatly contribute to the solution of management problems that arise from conflicting interests among the stakeholders involved (Hilhorst and Aarnink, 1999, pp. 11-12). Transaction costs economics, though initially developed to study economic organisation in the industrial sector, has increasingly been applied in studies on natural resource management (Kuperan et al., 1998 and Birner and Wittmer, 2000). Hanna (1995) argued that the ex post transaction costs arising after the establishment of a co-management system are likely to be lower than those in a centralised system due to increased legitimacy, leading to lower costs ensuing from monitoring and enforcement. However, the establishment of a co-management system involves ex ante transaction costs for searching information, co-ordination and bargaining that do not arise in a centralised system. Consequently, co-management increases the efficiency of natural resource management if the ex post savings in transaction costs more than outweigh the increased ex ante costs of establishing a collaborative management system, taking pure time preference into account (compare Hanna, 1995). Kuperan et al. (1998) empirically measured the transaction costs of collaborative fishery management systems and found that they were more efficient than state-managed systems. With this exception, however, empirical studies on the transaction costs of co-management have been scarce. Following North and Wallis (1994, p. 610) and Williamson (1991), transaction costs and production costs have to be studied simultaneously because it is the total of the production and transaction costs that determines the efficiency of a governance structure if benefits are held constant. So far studies that focused on transaction costs such as Kuperan et al. (1998) did not take into account other cost categories. Studies focusing more generally on efficiency in nature conservation such as Norton-Griffiths (1996), however, tended to neglect transaction costs. Therefore, the question has remained unclear as to how important transaction costs actually are as compared to other costs arising in nature conservation such as the cost of maintaining fences or the cost of guarding farms against damage caused by wildlife. A second issue that is relevant when evaluating co-management systems is the question of who has to bear the transaction costs. In this context it is also relevant to know more about the factors that influence the level of transaction costs that the local community members have to bear. Taking the case of two collaboratively managed community wildlife sanctuaries in Kenya as an empirical example, the present paper deals with these two questions: 1 the relative importance of the landowners’ transaction costs as compared to other cost categories, and 2 the factors influencing the transaction costs incurred by individual community members. Throwing light on these two issues will be useful for a better assessment of co-management approaches, especially with regard to the incentives and disincentives that this system may create for landowners. The paper is structured as follows: The next section develops the concepts to be used for the empirical analysis. Section 3 gives an overview of the two community wildlife sanctuaries used in the empirical case study and outlines the research methodology applied. Section 4 presents the results concerning the estimated transaction costs and compares them with other cost categories incurred by the landowners. Section 5 analyses and discusses the factors determining the transaction costs that the landowners incur. Finally, Section 6 draws a number of conclusions.

The analysis of the landowners’ transaction costs in this paper shows that these costs do not necessarily constitute the major cost category in co-managed wildlife sanctuaries. Wildlife manage- ment often in v ol v es considerable costs for acti v- ities such as fencing and guarding of farms in order to a v oid damages caused by wildlife as well as losses of crops and li v estock. These costs ha v eto be regarded as production costs rather than transaction costs arising from wildlife conser v a- tion. Our analysis helped to identify factors that can influence the landowners’ transaction costs ensu- ing from establishing and operating co-manage- ment arrangements. They include the attributes of the transactions, bio-physical and ecological (re- source) factors, community organisational condi- tions, the co-management arrangements resulting from the negotiations and the characteristics of the landowners. The landowners’ characteristics in- clude deri v ing benefits from conser v ation, human, social and financial capital, losses from human / wildlife conflicts and land tenure conditions. Our comparison of two wildlife sanctuaries shows that whether or not these factors are significant de- pends on the local conditions. The same factors can e v en ha v e the opposite effect in different cases. Deri v ing benefits, e.g., was only an incenti v e for participation in GM where the cash benefits were fairly distributed. In Kimana, where the benefits were not fairly distributed, the non-benefiting members tended to spend more transaction costs to contest for their rights, e v en though this effect was not statistically significant. Age as an indica- tor of human capital only had a significant positi v e influence on the willingness to bear transaction costs in Kimana where community members ha v e an already established power structure and the leadership by the elderly was recognised. Losses from wildlife attacks had a highly significant influence on transaction costs in GM where conser v ation interests conflict with the interests of the landowners to continue to practice their crop farming systems. Acti v e membership in local groups, which is an indicator of social capital, only had a significant influence in GM where groupsplay an important role. Clan ownership as a measure of social capital was the only v ariable, which in both cases had a significant positi v e influence on the amount of transaction costs the landowners were willing to bear. Looking at this differentiated picture, two issues appear promising with respect to future research on transaction costs. More empirical research co v ering a wider range of cases will help to impro v e the understanding of the specific interac- tions between local factors that influence the transaction costs borne by landowners. Such empirical research will also help to de v elop a more generalised theory of transaction costs, thus making it possible to deri v e predictions on the interaction of the di v erse factors influencing the transaction costs borne by the landowners.