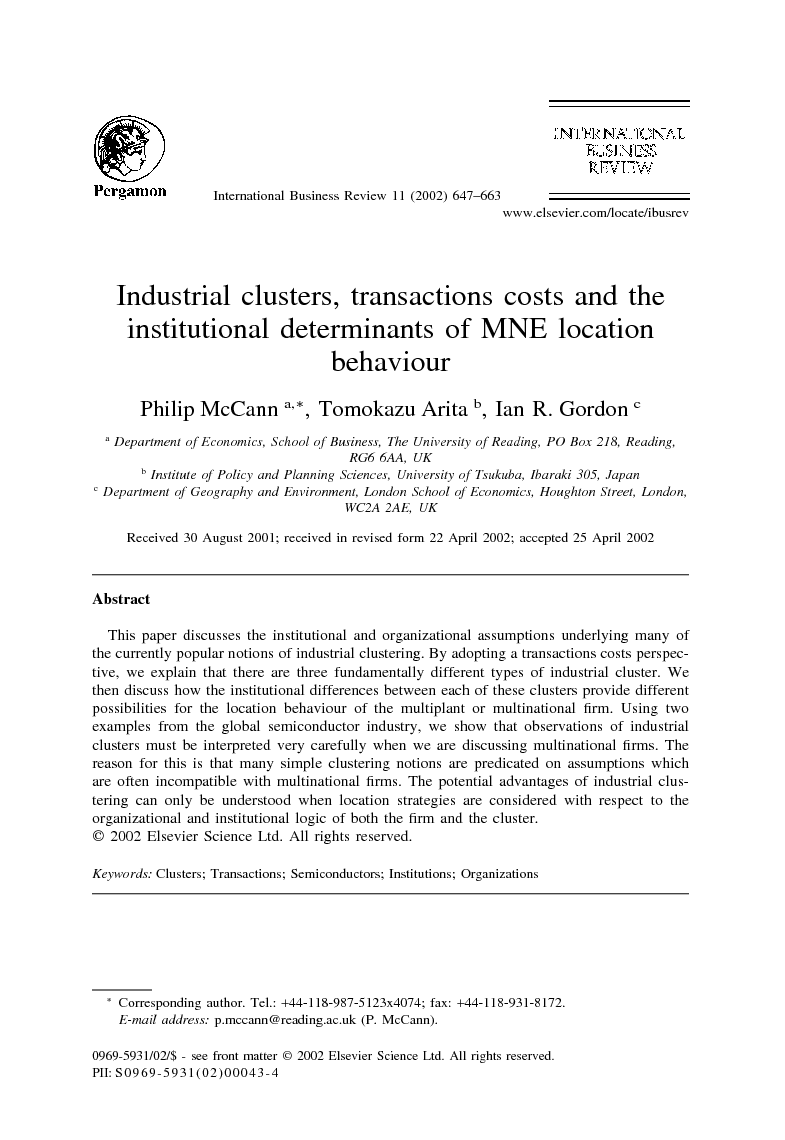 Market mechanisms are mediated via a range of different types of institutions, which can be of an economic, political or legal nature. In situations where institutional environments differ significantly between countries, the overcoming of such differences may incur non-trivial transactions costs. From the perspective of international business, the existence of such transactions costs leads to reduced firm efficiency, and where such costs are very significant, they can lead to missing markets and an absence of trade. In order to encourage economic growth and efficiency, the harmonization of institutional environments between countries is therefore one of the fundamental strategies used in the development of areas of economic integration, such as is the case with the EU (Rosamond, 2000 and Addison and Siebert, 1997), the ASEAN region (Yeung, 1999) and NAFTA (Clement, del Castillo Vera, Gerder, Kerr, MacFadyen, Shedd et al., 1999). According to neo-classical trade theories (Borts & Stein, 1964) the long run effect of these institutional changes will be a convergence in the economic performance of the various countries within the zone of integration (Barro & Sala-I-Martin, 1992) and an equalization of factor proportions across these countries. However, underlying this conclusion is not only the assumption that factors are mobile across space, but also that at the equilibrium prices, all areas are equally attractive as investment locations. More recent developments in economics (Krugman, 1991) and management science (Porter, 1990 and Porter, 1998), however, have highlighted the role that geography can play in engendering localized increasing returns to scale, thereby leading to consistent variations in the spatial patterns of investment both between countries (Krugman & Venables, 1990) and also within countries (Fujita, Krugman & Venables, 1999). In particular, variations in local information externalities (Jaffe, Trajtenberg & Henderson, 1993), labour hysteresis effects (Simpson, 1992 and Audrestch and Feldman, 1996), and location-specific input sources, can generate conditions under which not only is economic growth localized, but also different locations are consistently specialized in different activities. Under these kinds of conditions, factor price adjustments are not sufficient to ensure that all areas are equally attractive as investment locations, either for a single sector, or for all sectors. The insights, however, provide international business research with something of a problem, in that the nation state is not necessarily an appropriate, or even a meaningful spatial unit of analysis, for multinational enterprise (MNE) decision-makers concerned with the location of foreign direct investment (FDI). Increasingly, it is becoming accepted that FDI location issues must be discussed at the sub-national regional and urban levels (Cantwell & Iammarino, 2000), where the geographical extent of information spillovers, and variations in local input supplies, labour quality and environmental amenities, can be explicitly considered. In order to help discuss how these explicitly geographical issues relate to the behaviour of the MNE, the nation of ‘industrial clusters’ (Porter, 1990 and Porter, 1998) has recently been added to the familiar set of international business analytical tools, which already includes the OLI paradigm (Dunning, 1971) the product-cycle models (Vernon, 1966) and the stage theory of MNE evolution (Johanson & Vahlne, 1977). Discussions of the potential advantages of industrial clusters as locations for MNE investment are now widespread. Unfortunately, however, employing the notion of industrial clusters in order to motivate discussions of the location behaviour of MNEs, is not at all as straightforward as it may at first appear. The reason for this is that whereas international business research explicitly places institutional, organizational and information issues at the centre of analysis, much of the clusters literature is based on very stylised institutional notions of or the relationships between firms. From a transactions costs perspective, it can be shown that the notion of industrial clusters, in it simplest and most familiar form (Porter, 1990 and Porter, 1998), itself cuts across three quite different analytical concepts of industrial location behaviour, each of which is predicated on different assumptions about the nature of transactions costs, the nature of information exchanges, and the institutional frameworks through which these are mediated. Each of these three different cluster concepts has quite different implications for the location of MNE investment, and understanding the various assumptions behind the cluster notions is necessary in order to make sense of MNE clustering and location behaviour. The purpose of this paper is to explain the three different types of institutional frameworks underlying the various notions of industrial cluster, and then to discuss how we might interpret observed MNE location behaviour under various conditions. In order to illustrate the issues at stake, we discuss two MNE examples from the global semiconductor industry. Both of these examples initially appear to reflect simple industrial clustering arguments, but on closer inspection, MNE organizational insights show that the geographical issues are much more complex than at first they appear. Different types of clusters have different advantages for different types of MNEs, and distinguishing which type of firm will benefit from which particular cluster will require consideration of organization, information and institutional issues, many of which are ignored by the simple clusters literature. Our conclusion is that, even allowing for the current popularity of the clusters literature, orthodox international business research allied with classical location theory, still provides the most fundamental insights into the relationship between organization, institutions and MNE industrial location.

The major lesson to come out of these examples is that observations of industrial clustering behaviour on the part of high-technology activities, cannot necessarily be taken as evidence of the types of new industrial cluster arguments which are currently popular (Porter, 1990; Saxenian, 1994). Careful consideration must be given to the institutional logic of the cluster and the nature of the transactions which take placebetween fi rms within the cluster. Therefore, when we are assessing the alternative location possibilities for MNE fi rms at the sub-national regional level, with regard to issues such as local information spillovers, we must be very careful to distinguish the hypothesised source of such spillovers. Informal information spillovers between individuals and fi rms are a popular rationale for industrial clustering in much of the new industrial clusters literature. However, these types of transactions are often entirely incompatible with MNE behaviour, the organizational logic of which is often to internalise and formalise information transactions. As such, unless the MNE is willing and able to decentralise its organizational structures, almost to the point of hierarchy fragmentation, the MNE will neither bene fi t from, nor contribute to, such externalities. A quite different issue is the question of MNE location decisions in which the question of labour availability is of primary concern. Locating in an area with a local labour force which already has sector-speci fi c human capital, can reduce a fi rm ’ s labour acquisition costs, inclusive of labour training costs, relative to other areas. While it is true that such labour will already have embodied information, the transmission of this embodied information is primarily related to issues of local labour hysteresis and the resulting impacts on search costs (Simpson, 1992). As such, these are entirely different issues to the arguments about informal information spillovers between fi rms. Moreover, these issues can be analysed comprehensively by employing classical location theory and internal business frameworks, without having to resort to new industrial clusters arguments. In terms of clustering and location issues, by combining all of these various argu- ments, we now have three quite distinct fi rm location-organization possibilities for multiplant and multinational fi rms: The fi rst possibility is for the multiplant or multinational fi rm to locate in a dynamic cluster of the type re fl ected by Silicon Valley. However, in order to do this, not only must the fi rm allow the establishment to carry out its activities with almost complete autonomy, but also it must ensure that the establishment remains suf fi ciently small to militate against the development of extensive and in fl exible internal control sys- tems. This will ensure that the establishment bene fi ts from the supposed advantages of such clusters. The second possibility is for the multiplant and multinational fi rm to locate activities in a clustered manner in order to ensure the internalization of information and to maintain control of activities, either within the individual fi rm (Toshiba and Texas Instruments) or within a small, identi fi able and interdependent group of fi rms with stable and consistent relations such as ‘ Silicon Glen ’ in Scotland (McCann, 1997). In this case, the size of the establishment will generally to be large. This is the example of the industrial complex. The third possibility is for the establishment to locate in an area simply according to classical location arguments. In this case, the location decision is determined by considering the various local investment costs: such as those associated with the quality and availability of local labour, allowing for variations in ef fi ciency wages and ease of labour acquisition; the level of local land prices; the distance-transactions costs involved in the shipping of goods; and the distance-transactions costs involved in the acquiring and transmission of market and input supply information. These classical locational considerations may or may not result in industrial clustering behaviour. Moreover, where clustering does arise, it may not even involve any local inter- fi rm transactions (McCann, 1995). The point about these three alternatives is that observations of industrial clustering in high technology sectors such as semiconductors can not necessarily be treated as evidence of a new paradigm, along the lines suggested by much of the literature on new industrial clusters ’ . Industrial clustering and dispersion takes place today for the same reasons as it always as done, and MNE location behaviour can be con- sidered either with respect to traditional location theories (given as alternative (iii) above), or with respect to the organizational issues typical of international business research (given as alternatives (i) and (ii) above). This is not to refute modern clus- tering theories (Porter, 1990), but rather to understand the institutional factors which underlie such clustering behaviour both where it is evident, and also where it is not. What is always essential in considering MNE clustering behaviour is to consider the relationship between fi rm internalization issues and the institutional characteristics of cluster.