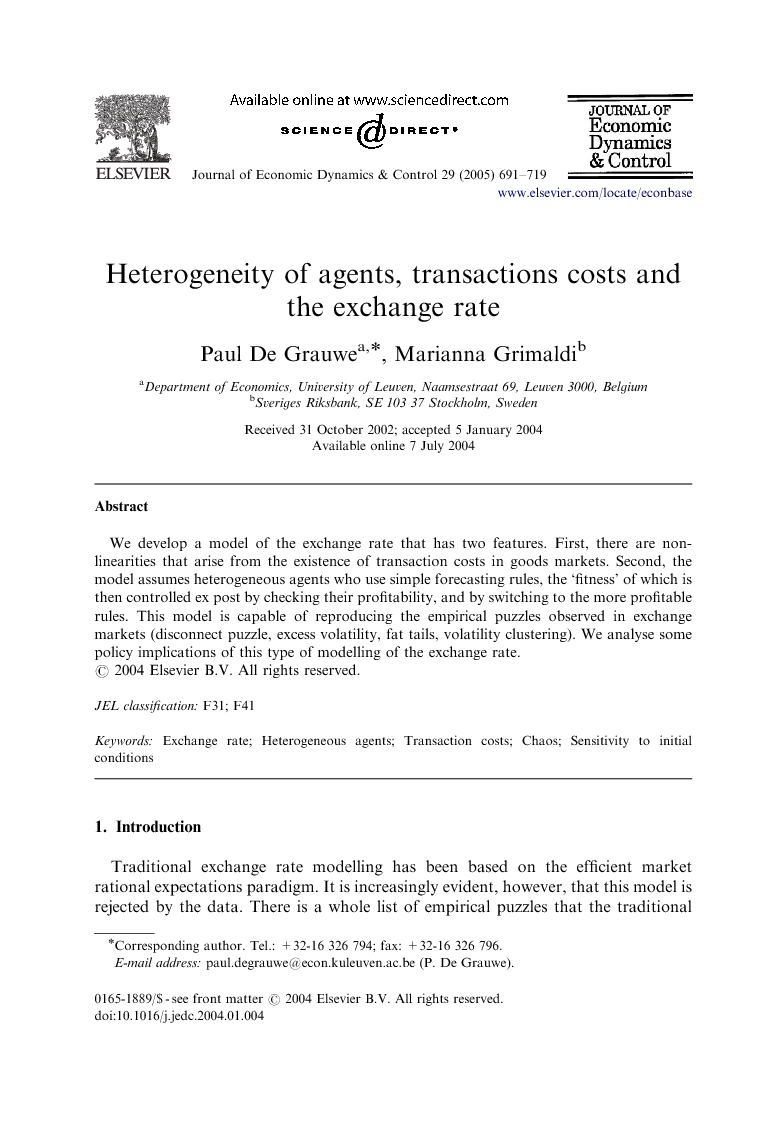 We develop a model of the exchange rate that has two features. First, there are non-linearities that arise from the existence of transaction costs in goods markets. Second, the model assumes heterogeneous agents who use simple forecasting rules, the ‘fitness’ of which is then controlled ex post by checking their profitability, and by switching to the more profitable rules. This model is capable of reproducing the empirical puzzles observed in exchange markets (disconnect puzzle, excess volatility, fat tails, volatility clustering). We analyse some policy implications of this type of modelling of the exchange rate.

Traditional exchange rate modelling has been based on the efficient market rational expectations paradigm. It is increasingly evident, however, that this model is rejected by the data. There is a whole list of empirical puzzles that the traditional model fails to explain. The first and foremost empirical puzzle has been called the ‘disconnect’ puzzle, i.e. the exchange rate appears to be disconnected from its underlying fundamentals most of the time. Goodhart (1989), Goodhart and Figlioli (1991) and more recently Faust et al. (2003) found that most of the changes in the exchange rates occur when there is no observable news in the fundamental economic variables. This finding contradicts the efficient market rational expectations models, which imply that the exchange rate can only move when there is news in the fundamentals. The exchange rate disconnect puzzle was also implicit in the celebrated Meese and Rogoff studies of the early 1980s (Meese and Rogoff, 1983) documenting that there is no stable relationship between exchange rate movements and the news in the fundamental variables. Other empirical anomalies have been uncovered over the years. One anomaly relates to the existence of excess volatility (Baxter and Stockman, 1989; Flood and Rose, 1995). Other puzzles are that the distribution of the exchange rate returns exhibits fat tails and volatility clustering (see de Vries, 2001; Lux, 1998; Lux and Marchesi, 2000). These empirical anomalies have also been observed in other financial markets (see e.g. Hommes, 2001). This evidence is difficult to rationalise in existing exchange rate models, since there is little evidence of fat tails and volatility clustering in the fundamental variables that drive the exchange rate in these models. There is a need for other modelling approaches of the exchange rate. Our modelling approach combines two insights. The first one focuses on the presence of non-linearities that arise from the existence of transaction costs in goods markets. Recent research has stressed the importance of transaction costs in the goods market for our understanding of the dynamics of exchange rate adjustments (Obstfeld and Rogoff, 2000; Engel, 2000; Michael et al., 1997; Kilian and Taylor, 2001; Sarno and Taylor, 2002). The second insight highlights the role of the heterogeneity of agents, who use incomplete information and who have different beliefs about the future exchange rate.1 Recently heterogeneity of agents was also introduced in rational expectations models (see e.g. Bacchetta and van Wincoop, 2003). The implication of rational expectations in models with heterogeneous agents is that it creates ‘infinite regress’, i.e. the exchange rate depends on the expectations of other agents’ expectations, which depends on the expectations of the expectations of other agents’ expectations, and so on, ad infinitum. This leads to intractable mathematical problems except under very restrictive simplifying assumptions. Although this approach is intellectually satisfying, it is unclear that it is a good representation of what agents do in the exchange market. It requires these agents to solve a mathematical problem to which mathematicians have as yet been unable to give a general solution. This seems to us as imposing too large an informational burden on individual agents. Our approach contrasts with this rational expectations approach in that agents use simple rules, the ‘fitness’ of which is then controlled ex post by checking their profitability,2 and by switching to the more profitable rules. The paper is organised as follows. In 2 and 3 we present the theoretical model. In 4, 5, 6 and 7 we analyse its features, while in Section 8 we show the empirical relevance of the model. We conclude with some general implications for the exchange rates of the major currencies.

In this paper we developed an exchange rate model,which has the following features. First,it introduces a non-linearity in the dynamics of the foreign exchange market that finds its origin in the existence of transaction costs in the goods markets. Second it allows for heterogeneity of the agents’ beliefs. In particular,it assumes that agents use different forecasting rules,and that they switch to the most profitable one after evaluating their relative profitability. The model does not assume rational expectations. The problem of rational expectations models with heterogeneous agents is that it creates an ‘infinite regress’ problem,thereby imposing an unreasonable informational burden on individual agents. Therefore,we find it more useful to assume that in a highly complex world,agents use simple forecasting rules and evaluate the ‘fitness’ of these rules ex post. The model generates a multitude of fixed-point attractors depending on the initial conditions. By adding exogenous noise the model produces a dynamics that resembles a chaotic one,although the deterministic part of the model is not chaotic. This feature has interesting implications. First,there is sensitivity to initial conditions,which implies that a small disturbance can drive the exchange rate on a different path. Second,the effect of a permanent shock in the fundamental exchange rate is largely unpredictable,i.e. one cannot forecast how the shock will affect the exchange rate in any particular point of time,but one can predict the average effect. It also implies that the exact timing of the shock matters. History matters. The empirical relevance of the model is a measure of its quality. Therefore,we analysed to what extent our model is capable of reproducing the exchange rate puzzles that we observe in reality. The first puzzle we analysed is the ‘disconnect puzzle’. This puzzle relates to the fact that the exchange rate movements are disconnected,most of the time,from the movements of the underlying fundamental variables. In our model ‘disconnection’ is a natural outcome when the variance of the underlying fundamentals is small compared to the size of the transactions costs in the goods market. We argued that this is the regime in which the currencies of the main industrialised countries find themselves in. In contrast,when the size of the fundamental shocks is large relative to the size of the transactions costs,the exchange rate is less disconnected from the underlying fundamentals. Second,fat tails and excess kurtosis,which have been detected in the exchange rate returns,are generated by our model. In other words,our model generates a dynamics of the exchange rate with intermittency of high and low turbulence periods. A third empirical regularity concerns the volatility clustering and persistence of exchange rate returns. We found GARCH effects in the simulated exchange rate returns that come close to the observed GARCH effects in the real life exchange rate returns. A fourth empirical regularity is the continuing existence of chartists. This cannot easily be rationalised in the efficient market rational expectations model. In our model where chartists and fundamentalists continuously switch to the most profitable forecasting rule,chartists tend to dominate the market. Some implications of these findings are the following. The exchange rates of the major currencies are subject to relatively small shocks in the underlying fundamentals (e.g. inflation differentials are almost zero). Compared to these shocks the transactions costs in the goods markets can be said to be relatively large (see Obstfeld and Rogoff,2000 ,on this),i.e. a large part of goods and services are non- traded (or difficult to trade) because the cost of shipping them across borders is quite high. Thus,the regime confronted by the exchange rates of the major industrialised countries comes close to the regime we have identified to be the one where exchange rates are disconnected from fundamentals,and where excess volatility and speculative noise is produced by chartists’ activity. Put differently,the movements of the exchange rates of the industrialised countries are likely to be clouded by a non- linear speculative dynamics that makes it difficult if not impossible to explain this or that movement of these exchange rates.