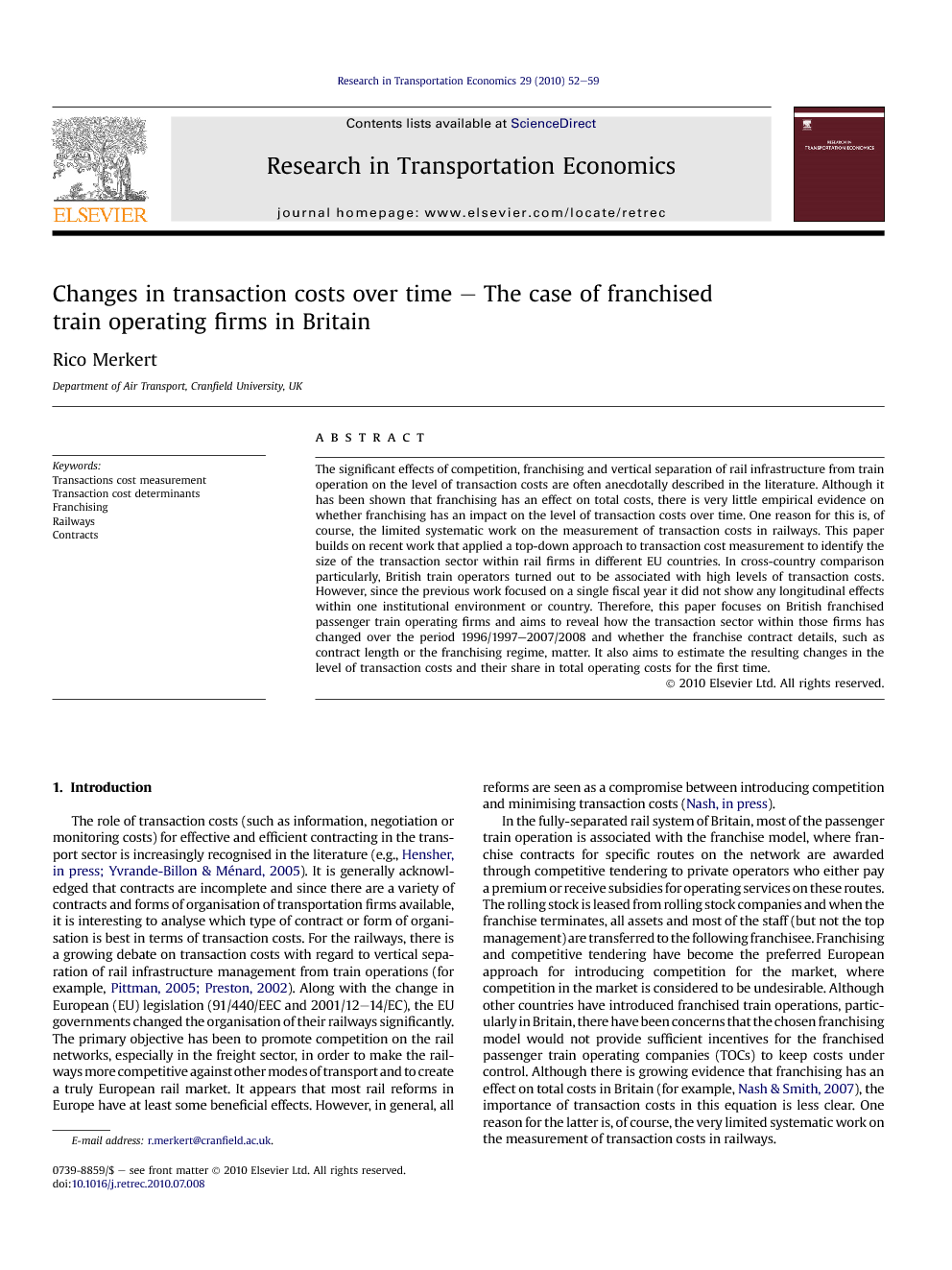 The role of transaction costs (such as information, negotiation or monitoring costs) for effective and efficient contracting in the transport sector is increasingly recognised in the literature (e.g., Hensher, in press and Yvrande-Billon and Ménard, 2005). It is generally acknowledged that contracts are incomplete and since there are a variety of contracts and forms of organisation of transportation firms available, it is interesting to analyse which type of contract or form of organisation is best in terms of transaction costs. For the railways, there is a growing debate on transaction costs with regard to vertical separation of rail infrastructure management from train operations (for example, Pittman, 2005 and Preston, 2002). Along with the change in European (EU) legislation (91/440/EEC and 2001/12–14/EC), the EU governments changed the organisation of their railways significantly. The primary objective has been to promote competition on the rail networks, especially in the freight sector, in order to make the railways more competitive against other modes of transport and to create a truly European rail market. It appears that most rail reforms in Europe have at least some beneficial effects. However, in general, all reforms are seen as a compromise between introducing competition and minimising transaction costs (Nash, in press). In the fully-separated rail system of Britain, most of the passenger train operation is associated with the franchise model, where franchise contracts for specific routes on the network are awarded through competitive tendering to private operators who either pay a premium or receive subsidies for operating services on these routes. The rolling stock is leased from rolling stock companies and when the franchise terminates, all assets and most of the staff (but not the top management) are transferred to the following franchisee. Franchising and competitive tendering have become the preferred European approach for introducing competition for the market, where competition in the market is considered to be undesirable. Although other countries have introduced franchised train operations, particularly in Britain, there have been concerns that the chosen franchising model would not provide sufficient incentives for the franchised passenger train operating companies (TOCs) to keep costs under control. Although there is growing evidence that franchising has an effect on total costs in Britain (for example, Nash & Smith, 2007), the importance of transaction costs in this equation is less clear. One reason for the latter is, of course, the very limited systematic work on the measurement of transaction costs in railways. This paper draws on recent results of a transaction cost measurement analysis for the railways (Merkert, in press). In this first study of its kind, it has been shown that transaction cost measurement is possible, even in today’s commercially data-sensitive rail industry. It has been further established that the degree of vertical separation has an impact on transaction costs but that their magnitude in relation to total operating costs is relatively low. Nevertheless, in this first transaction cost cross-country comparison, particularly British train operators turned out to be associated with high levels of transaction costs. Since this previous work focused on a snapshot of 2006/2007, it is questionable whether these transaction costs, as an indicator of the internal efficiency of the newly emerged organizational structures, have changed over time. With regard to the British case, it is firstly interesting to analyse whether transaction costs had been at a very high level just after the major restructuring of the British rail system1, as a result of substantial uncertainty and intense negotiation of new and complex contracts where previously transactions have been managed within the one rail company of British Rail. It is then interesting to establish whether these initially high transaction costs have declined over time, for instance, as a result of learning effects and developing strong informal partnerships between the different relevant parties. In addition, since it has been shown that the costs of train operation have been spiralling as a result of the aftermath (new safety culture, management contracts etc.) of the train accident in Hatfield (see Smith & Wheat, 2007), it is appealing to measure the extend of which transaction costs have contributed to the substantial increase in total costs. It is, finally, worth examining whether contract details, such as length and remaining years of the franchise contracts, have an impact on the level of transaction costs. In the transaction cost economics literature it is generally argued that long-term contracts can reduce the level of transaction costs (see for example, Joskow, 1987) and it is interesting to analyse whether this is also the case for British TOCs. To sum up, the aim of this paper is to determine whether transaction costs change over time, which should be particularly so in the case of British franchised train operating companies over the period from 1996 to 1997 until 2007–2008. The paper is structured as follows. Section 2 presents the general framework for transaction cost measurement that is used in this paper. Section 3 details the methodology and the data. The results are presented and discussed in Section 4, whilst Section 5 offers some conclusions.

The signi fi cant effects of competition, franchising and vertical separation of rail infrastructure to the costs of train operating companies are well discussed in the previous literature. This paper set out to shed light on their potential effects on the level of transaction costs and to test whether it is possible to measure transaction costs in a longitudinal sense. Overall, the top- down transaction cost measurement approach used in this paper produces interesting results and reveals that transaction costs indeed, change over time. As with Merkert (in press) , the trans- action sector and respectively, the level of transaction costs as a share in operating costs, is relatively low (at the maximum 4.7%). However, as with Wallis and North (1986) , it increases signi fi cantly over the analysed period of 1996 e 1997 until 2007 e 2008. As expected, initially after the introduction of competition and the split between rail infrastructure management and the train oper- ators, the transaction costs per train-km are relatively high. The decrease in the following years (again as predicted) suggests that there have been learning effects and strengthening relationships/ trust between the transacting parties. Thus, initially franchising has worked in terms of bringing transaction costs down. However, since the Hat fi eld accident in 2000, the transaction costs have been increasing and this is substantially stronger than the also-increasing operating costs. This is due totwo issues. Firstly, since 2000 e 2001, TOCs have increasingly employed signi fi cantly more transaction staff, relative to production staff. This trend was stopped in 2006 e 2007, which led to the fl attening of the increase in transaction costs per train-km. Secondly, and more importantly, is the fact that the relative staff costs of transaction staff have increased considerably and continuously over the entire period of 1996 e 1997 until 2007 e 2008. Therefore, even if the TOCs will further cut transaction staff numbers as a result of the ongoing recession and decreasing outputs, the more ef fi cient option would be to get control over wageand salary payments (including pension costs) which have increased substantially above in fl ation over the analysed period. Overall, the key fi nding is that the total change of the transaction sector and, respectively, transaction costs over the analysed twelve-year period, has been substantially stronger than that of all other analysed variables. Even if one argues that fi rms may become more pro fi table when they spend more on transaction services (because of betterdecision makingor bettermanagement), this substantial transaction cost increase signi fi cantly outweighs the bene fi ts for the fi rms in our sample. Nevertheless, again, it is worth mentioning that the measured levels of transaction cost are (in relation to the total operating costs) still relatively low. The results, of course, raise the question of what is captured with the model. On one hand, according to Wang (2007, p. 121) , the measuring of labour input is dif fi cult and the potential rather than the realised capacity is measured. This applies also to this analysis and, hence, future research is needed to investigate the realised labour effort dedicated to relevant transactions. What this limita- tion means is that, by de fi nition, there will be a potential overestimation of the actual transaction costs of the fi rms. On the other hand, if transaction costs are seen in the more institutional sphere of transaction cost economics, one would have to consider for example uncertainties, opportunity costs and the transaction costs of rail systems as a whole, in addition to the narrowly de fi ned transaction costs of our sample. In terms of contract details, this paper found a positive impact (more costs) of the franchise contract length, a negative impact of the remaining months of a franchise contract and a positive impact of the more recent franchise regimes on the transaction costs per- train km. The results suggest further, that the optimal contract length with respect to transaction costs would be 5 years and 4 months. The type of contract (management/re-negotiated versus normal contracts), appears to have no signi fi cant effect on the level of transaction costs. What the regression results mean is that the longer the franchise contract and the less months left on that contract at the point of the analysis and the more pre-speci fi ed the contract (awarded by either SRA or even DfT), the higher the rela- tive transaction costs. Whilst the latter two fi ndings appear to be plausible, the earlier is less so, which may be related to the fact that the second regression model used in this paper did notexplain very much of the data variation. Therefore, more research into these and other determinants of the level of transaction costs and their change over time is needed.