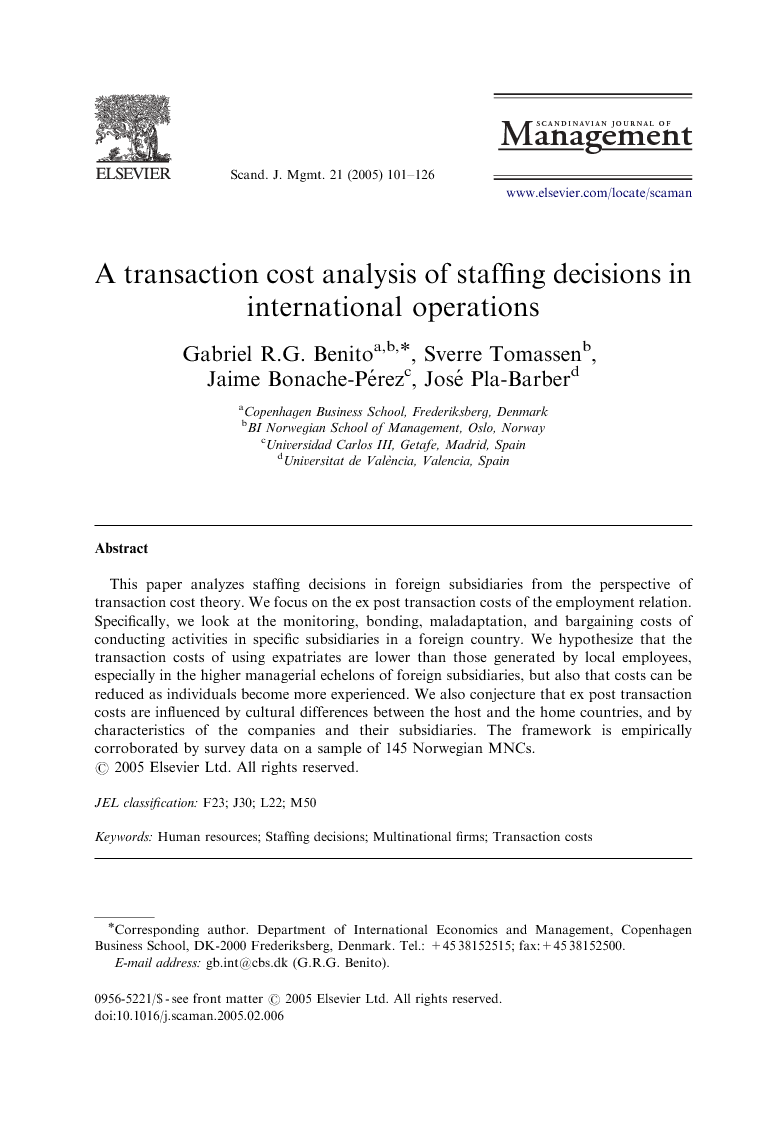 This paper analyzes staffing decisions in foreign subsidiaries from the perspective of transaction cost theory. We focus on the ex post transaction costs of the employment relation. Specifically, we look at the monitoring, bonding, maladaptation, and bargaining costs of conducting activities in specific subsidiaries in a foreign country. We hypothesize that the transaction costs of using expatriates are lower than those generated by local employees, especially in the higher managerial echelons of foreign subsidiaries, but also that costs can be reduced as individuals become more experienced. We also conjecture that ex post transaction costs are influenced by cultural differences between the host and the home countries, and by characteristics of the companies and their subsidiaries. The framework is empirically corroborated by survey data on a sample of 145 Norwegian MNCs.

One of the central decisions that multinational companies (MNCs) must make is whether to select expatriate or local personnel to manage and work in their foreign subsidiaries. In spite of the alleged globalization of businesses, many MNCs continue to be ethnocentric in their staffing policies (Mayrhofer & Brewster, 1996). This is effectively the case in Japanese companies: according to a survey by Kopp (1994), 74 percent of their subsidiaries’ directors are expatriates, whereas European and US MNCs are less ethnocentric, with expatriates occupying 54 percent and 48 percent of senior management posts, respectively. Similar results were obtained by Tung (1982), and more recently by Harzing (2001) and Peterson, Napier, and Shim (2000) who also find that while there is substantial cross-national variation regarding staffing practices in foreign subsidiaries, US and European MNCs in particular seem to have reduced their use of expatriates somewhat over time. There are problems associated with an ethnocentric posture (Perlmutter, 1969). It has been noted that it creates problems of adaptability to foreign environments and cultures, leads to high failure rates, has a discouraging effect on local management morale and motivation, increases the “foreignness” of the subsidiary, and may involve high salary costs (see e.g. Black & Gregersen, 1999; Welch, 1994). Overall, international assignments seem to be an expensive option for most companies, and it is estimated that the costs of expatriates can amount to more than three times that of local employees (Gates, 1996). If we focus on costs, we must ask ourselves the following question: If local personnel are a cheaper recruitment option, then why is it that, in a business context defined by the need to cut costs, multinational companies continue to make extensive use of international assignments? Research on foreign assignments dates back to the seminal study of international transfers by Edström and Galbraith (1977), but previous studies have tended to be descriptive and/or to have an operational and practical orientation. They lack analytical rigor and as pointed out by Harzing (2001, p. 140) “…few authors offered a theoretical framework for their investigation”. To advance our understanding of the complexities of staffing patterns in MNCs, we believe that it is appropriate to base such examinations on solid theoretical ground. The paper analyzes that question from the perspective of transaction cost economics (Williamson, 1985). Although the organization of labor has been seen as a key topic in transaction cost theory (Masters & Miles, 2002; Williamson, Wachter, & Harris, 1975; Williamson, 1985), it is only an emergent theoretical lens for analyzing the use of expatriates within MNCs (Tan & Mahoney, 2003). As far as we know, the present study is the first to use transaction cost theory as the basis for an empirical analysis of staffing decisions in MNCs. After explaining why this theoretical perspective is particularly suited to examining this question, we analyze the overall costs that are implicit in managing personnel in foreign subsidiaries, above and beyond the salary-related costs to which the traditional expatriate literature limits its attention. In this paper we focus on the ex post transaction costs of the employment relation. Specifically, we look at the monitoring, bonding, maladaptation, and bargaining costs of conducting activities in specific subsidiaries in a foreign country. We propose that the costs of using expatriates are lower than those generated by local employees, especially in the higher managerial echelons of the foreign subsidiary, and we develop a testable model of factors that influence the level of intra-company transaction costs. The framework is empirically corroborated by survey data on a sample of 145 Norwegian MNCs. Altogether, the study makes a contribution towards a transaction cost explanation for why companies sometimes apply ethnocentric staffing policies. The remainder of this paper is organized as follows. The next section develops a theoretical argument for transaction costs differentials between local employees and expatriates, and discusses those factors that may have an effect on levels of intra-company transaction costs. The data collection and measurement procedures are then described, followed by a report of the empirical results. The final section discusses the findings of the study, points out its limitations, and suggests directions for further research.