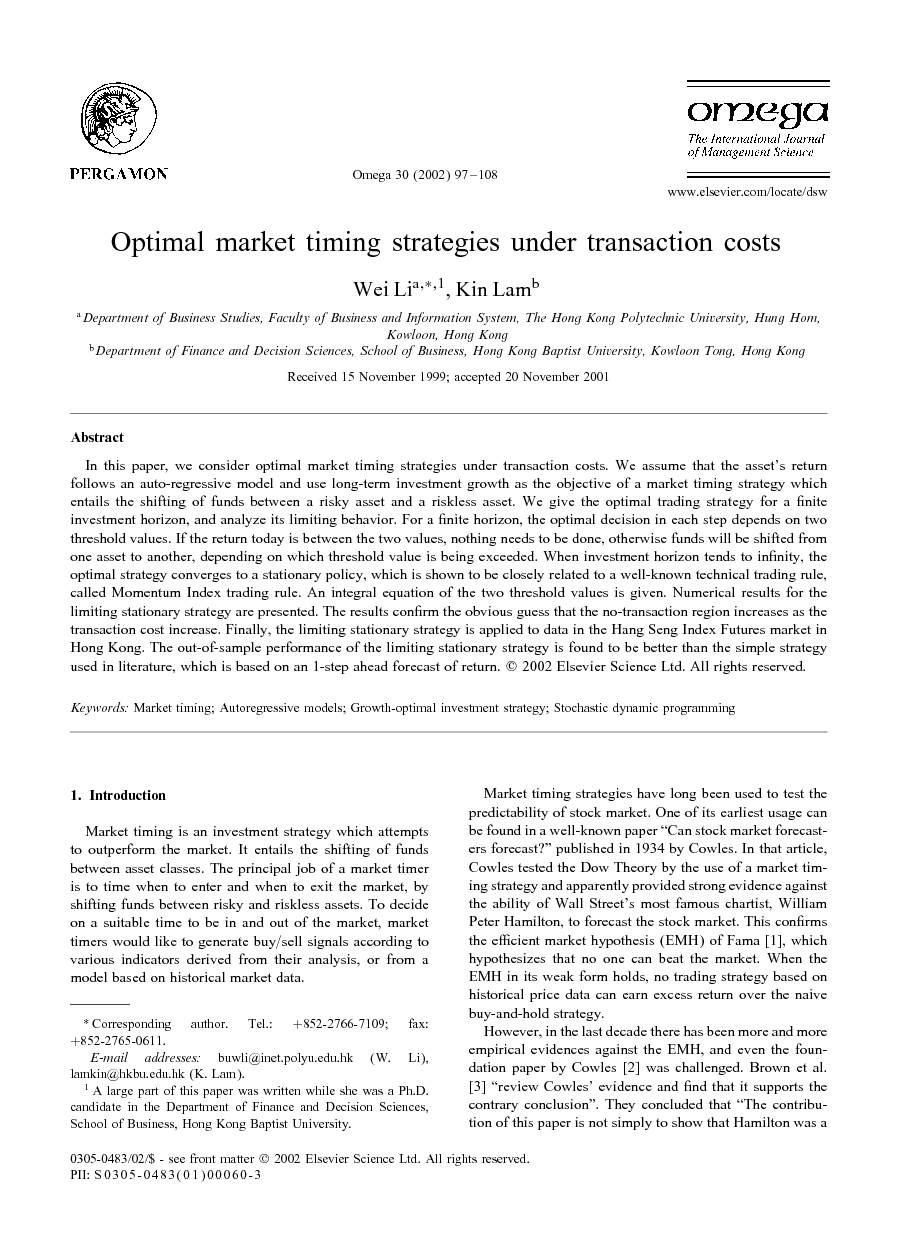 In this paper, we consider optimal market timing strategies under transaction costs. We assume that the asset's return follows an auto-regressive model and use long-term investment growth as the objective of a market timing strategy which entails the shifting of funds between a risky asset and a riskless asset. We give the optimal trading strategy for a finite investment horizon, and analyze its limiting behavior. For a finite horizon, the optimal decision in each step depends on two threshold values. If the return today is between the two values, nothing needs to be done, otherwise funds will be shifted from one asset to another, depending on which threshold value is being exceeded. When investment horizon tends to infinity, the optimal strategy converges to a stationary policy, which is shown to be closely related to a well-known technical trading rule, called Momentum Index trading rule. An integral equation of the two threshold values is given. Numerical results for the limiting stationary strategy are presented. The results confirm the obvious guess that the no-transaction region increases as the transaction cost increase. Finally, the limiting stationary strategy is applied to data in the Hang Seng Index Futures market in Hong Kong. The out-of-sample performance of the limiting stationary strategy is found to be better than the simple strategy used in literature, which is based on an 1-step ahead forecast of return.

nthispaper,wegivethegeneralformulationforthere- turnprocessfollowinganARMA( p;q )model,andconsider theoptimalmarkettimingstrategiesundertransactioncosts assumingthatthereturnoftheassetpricefollowsanAR(1) model.Bytheuseofstochasticdynamicprogrammingtech- niques, we derive the optimal trading strategy for a 0nite investmenthorizonandconsiderthelimitingbehaviorofthe strategy. Numerical results of the limiting trading strategy are computed. The results con0rm that the no-transaction region increases as the transaction cost increases. We also 0ndthatthereisacloserelationbetweenthelimitingstrat- egyandoneofthepopulartechnicaltradingrules,theMo- mentumIndextradingrule.Thelimitingstrategyisapplied to data in the Hang Seng Index Futures market in Hong Kong. The performance of the limiting stationary strategy isfoundtobebetterthanthatofthesimplestrategyusedin theliterature.Althoughnoanalyticsolutionfortheoptimal strategycanresultusingageneralARMA( p;q )orGARCH approach,numericalresultswouldbeinteresting.Otherprice modelsliketheprice-trendmodelinTaylor[26]canalsobe tried to see if meaningful trading strategy can be derived. Our conclusion is that when the predictability of a return model is under test, it is essential to take transaction costs intoconsideration,andthebeststrategytouseundertrans- actioncostsisnotthesimplestrategy.Theproperprocedure is to work out the optimal strategy 0rst and then carry out thetestwhethertheoptimalstrategycanbeatthemarketor not.