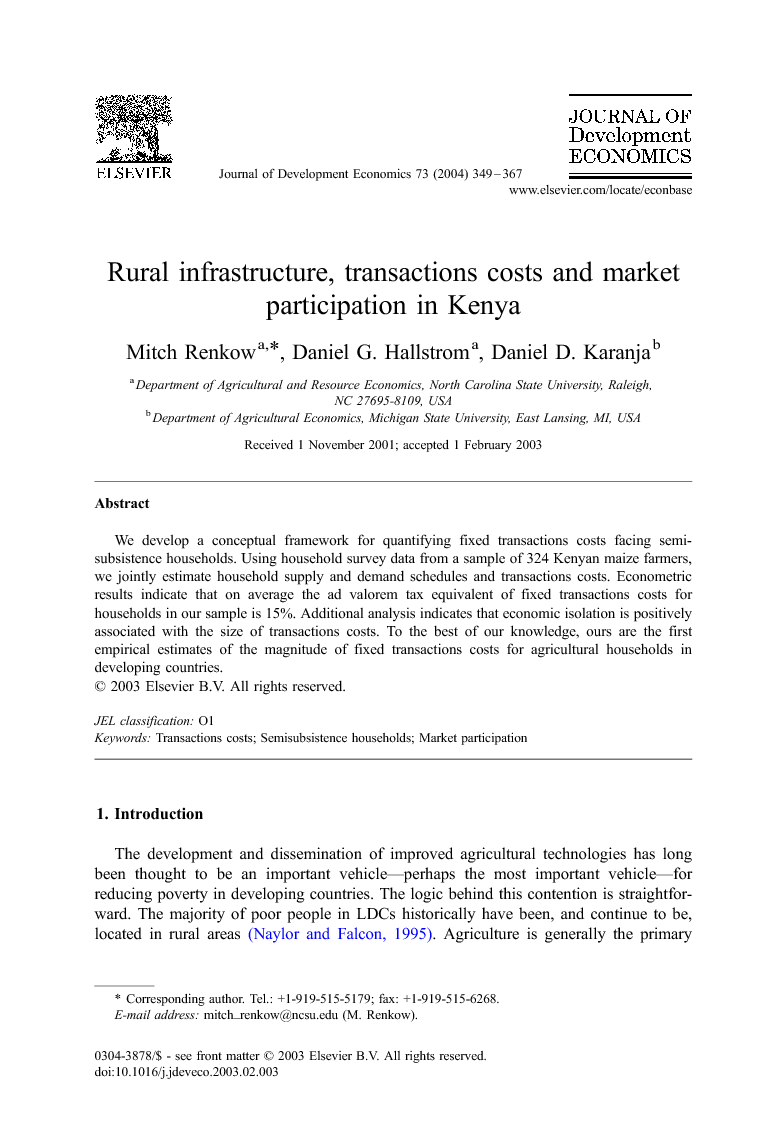 The development and dissemination of improved agricultural technologies has long been thought to be an important vehicle—perhaps the most important vehicle—for reducing poverty in developing countries. The logic behind this contention is straightforward. The majority of poor people in LDCs historically have been, and continue to be, located in rural areas (Naylor and Falcon, 1995). Agriculture is generally the primary source of income for the rural poor, both through crop production activities and via employment in agriculture and agriculture-related industries Reardon et al., 1998 and Haggblade et al., 1989. By virtue of its ability to improve agricultural productivity, technological change is thus seen as playing a pivotal role in rural poverty alleviation. There is by now little remaining doubt that the widespread adoption of improved seeds, fertilizers, and other agricultural technologies since the outset of the Green Revolution has had a profound positive impact on aggregate incomes, including the incomes of the poor (Byerlee, 1996). Considerable concern remains, however, about the spatial distribution of the benefits of new agricultural technologies. Most of the major success stories in international agricultural research have occurred in production environments characterized by an assured water supply and other favorable agronomic conditions. Comprehensive studies of the distributional impacts of technological change have generally come down on the side of maintaining a strong emphasis on research strategies oriented toward these favored production environments on both efficiency and equity grounds, due to technology spillovers (from areas where the new technologies are best adapted to other, less-suitable locations) and economic spillovers mediated through product and factor markets.1 Despite the moderating influence of these spillover effects, persistent interregional income disparities commonly exist between “high-potential” and “low potential” agroecological zones (Renkow, 2000). In addition, existing evidence suggests that the incidence of rural poverty—especially severe poverty—is generally greater in environmentally fragile locations such as the Andean highlands or the semiarid tropics of India (Leonard et al., 1989). For those locations where external conditions limit a household's ability to market agricultural products or increase agricultural productivity, alternative public investments may well hold greater potential for poverty alleviation than additional agricultural research. This view is supported by recent work indicating the existence of a significant link between poverty reduction and public infrastructure investments in India (Fan and Hazell, 1999). Infrastructure investments can work in a number of ways to enhance the returns to resources commanded by rural households. By lowering the transactions costs of market exchange, they can boost net returns to agricultural production. They can lead to greater availability (at lower cost) of necessary agricultural inputs such as fertilizers and chemicals, and thus improve welfare by increasing agricultural productivity. Perhaps more importantly, improved transportation and communications infrastructure facilitates spatial integration of product and factor markets, both in the agricultural and nonagricultural sectors. Assessing the relative merits of infrastructure investments and other types of actions aimed at reducing transactions costs requires knowledge of the size of those transactions costs. In this paper we take a step in that direction by developing a conceptual framework for quantifying fixed transactions costs facing rural households. Our focus on fixed transactions costs is in large part data driven: the price data that we used in implementing our theoretical model are inclusive of proportional transactions costs facing our sample households. For this reason, the identification strategy of our empirical analysis takes as given that all proportional transactions costs are observed. Nonetheless, a distinct contribution of our analysis is that we develop a methodology for expressing those fixed transactions costs as tax equivalents, thereby facilitating assessment of their magnitude vis-à-vis output prices. We implement our model using household survey data from a sample of 324 Kenyan maize farmers. We jointly estimate household supply and demand schedules and fixed transactions costs under alternative specifications of the latter. Our econometric results indicate that on average the ad valorem tax equivalent of the fixed transactions costs in our sample is 15%. To the best of our knowledge, ours are the first empirical estimates of the magnitude of fixed transactions costs facing semisubsistence households. Additional analysis indicates that two indicators of economic isolation of households—distance from the nearest market and predominance of animals or bicycles as the primary mode of transport for the village—are positively associated with the size of fixed transactions costs. We infer from this that insofar as it facilitates market integration, public infrastructure investment represents a potentially fruitful avenue for improving the welfare of relatively remote rural households. The paper is organized as follows. The next section develops a conceptual framework for analyzing the size and determinants of fixed transactions costs facing semisubsistence households. We then outline an empirical strategy for estimation. Following discussion of econometric issues and data, we present our results. Some concluding remarks are found in the paper's final section.

For those locations where external conditions limit a household’s ability to market agricultural products or increase agricultural productivity, alternative public investments that reduce transactions costs associated with market exchange may well hold greater potential for poverty alleviation than additional agricultural research. In this paper, we have developed a conceptual framework for measuring the size of fixed transactions costs facing rural semisubsistence households. A distinct contribution of our efforts is that it allows expression of those transactions costs as ad valorem tax equivalents, thereby facilitating assessment of their magnitude vis-a ` -vis output prices. Using household survey data from a sample of 324 Kenyan maize growing households, we jointly estimated household demand and supply schedules and fixed transactions costs. Our econometric results indicate that on average the ad valorem tax equivalent of the fixed transactions costs in our sample is 15.5%. To the best of our knowledge, ours is the first empirical estimate of the size of fixed transactions costs facing semisubsistence households. Our empirical results support a generally held belief that transactions costs are a significant deterrent to market participation by agricultural households. This, by itself, is not surprising, and can be inferred by simply noting the substantial number of households in our sample that neither purchased nor sold maize. However, we have also provided some empirical estimates on how market integration affects the size of the price bands facing rural households. With cross-sectional data the more standard cointegration techniques for testing the degree of market integration are not available to us. Instead, we used village-level data on primary modes of transportation and the distance to the nearest permanent market as indirect measures of the degree a household is integrated into broader markets. We find that two proxies for economic isolation of households—distance from the nearest market and predominance of animal or bicycle transport—are positively associ- ated (albeit weakly) with the size of fixed transactions costs. It would thus appear that to the extent that it facilitates market integration, public infrastructure investment represents a potentially fruitful avenue for improving welfare of economically isolated rural households. Finally, we found no evidence to support the conventional wisdom that transactions costs decline with household wealth. However, we note that our proxy for wealth—farm size—may well be capturing differences in the degree to which imperfections in labor markets affect different households. In future work we intend to explore this further by endogenizing household labor force participation decisions in our analytical model.