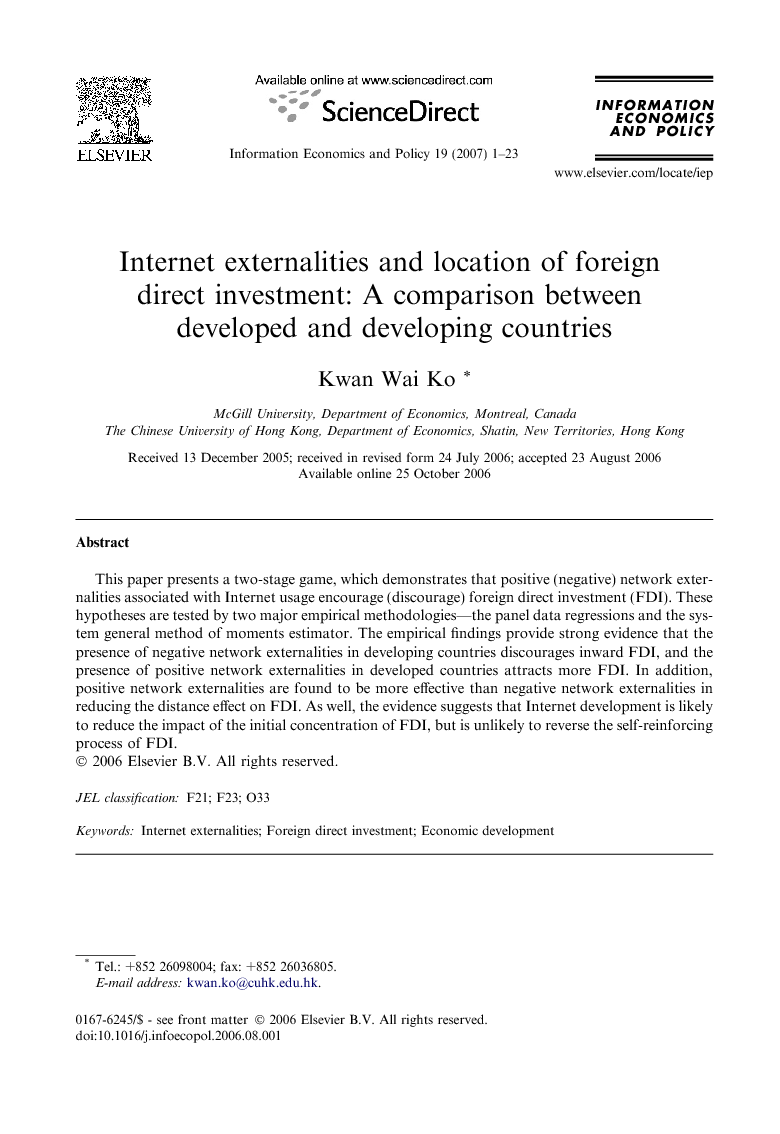 The widespread use of the Internet in developing countries since the mid-1990s has created high expectations concerning the attraction of inflows of foreign direct investment (FDI). However, in recent years, even though the Internet traverses every single country in the world, disparities in the quality of its infrastructure in developing and developed countries have become apparent. As such, developing countries face a dilemma about increasing Internet usage, which gives rise to both positive and negative network externalities. In the present study, “positive network externalities” mean that new Internet users can add value to the value of all other users. For instance, as more users share communication network costs, the cost per user of the network decreases. Also, as more users are connected, a larger base for prospective customers and suppliers is created. On the other hand, “negative network externalities” mean that the growing number of users increase the strain on existing connections, causing Internet congestion. The purpose of the present study is to examine how the Internet—a communication network—which is characterized by the presence of positive and negative network externalities affects the locational choice of FDI1. It is worth noting that developing countries have experienced a severe Internet congestion problem and that the lack of bandwidth2 in these countries is one of its major causes. According to Sarrocco (2002, p. 23), “the availability of adequate and reliable bandwidth on international links, together with the quality of the local network, is one of the primary obstacles to universal connectivity3 of and within the less developed countries.”4 The report also points out that until a few years ago, few developing countries had more than 64 kbit/s, which means that an entire country had, on average, the same amount of bandwidth that a single user could access in Europe or the United States. The present study mainly builds on the studies by Harris, 1995, Choi, 2003 and Freund and Weinhold, 2004. In Harris (1995), the role of communication technology is to facilitate coordination within a firm, and between a firm and the suppliers of factor services. His general equilibrium model predicts that negative network externalities (i.e., Internet congestion) reduce the extent of market expansion. Choi (2003) finds a positive relationship between Internet development and FDI. Freund and Weinhold (2004) provide evidence of a positive relationship between Internet development and trade flows. This study distinguishes itself from these studies in three aspects. First, unlike Choi, and Freund and Weinhold, this study highlights the importance of positive and negative network externalities for determining the location of FDI. Second, this study extends Freund’s and Weinhold’s (2004) use of Cournot competition as a theoretical framework. This study applies a two-stage game in which firms not only compete with each other in terms of quantity but also compete to reduce coordination cost by using the Internet. Third, this study incorporates two determinants of FDI in relation to Internet development: distance barrier (or distance effect) and agglomeration effects. The term “distance barrier” means the distance between the host country and investing country, which acts as a barrier to FDI. That is, the greater the distance from the multinational corporations (MNCs) to the host countries, the higher the production costs—such as traveling costs, monitoring costs, and information costs—incurred by MNCs. Recent empirical studies, such as Brenton et al., 1999 and Buch et al., 2005, find that the geographical distance is negatively associated with inward FDI. This study models coordination cost as a function of the geographical distance and Internet expenditure, and empirically tests whether network externalities change the distance effect on FDI. Agglomeration effects emerge from the clustering of other firms and imply that the presence of past FDI attracts more new FDI. The World Investment Report (2001) acknowledges that although the Internet increases the mobility of MNCs, they tend to concentrate geographically because of agglomeration effects. This study provides empirical evidence on whether the Internet has reinforced or reduced agglomeration effects. To summarize, this study identifies the type of network externalities (positive or negative) and examines whether they reduce the distance effect and agglomeration effects on FDI in both developed and developing countries. The remainder of the present study is structured as follows. Section 2 presents a two-stage model. Section 3 discusses the data issues. Section 4 reports the results using different econometric analyses. Section 5 concludes with a summary of the results and the policy implications.