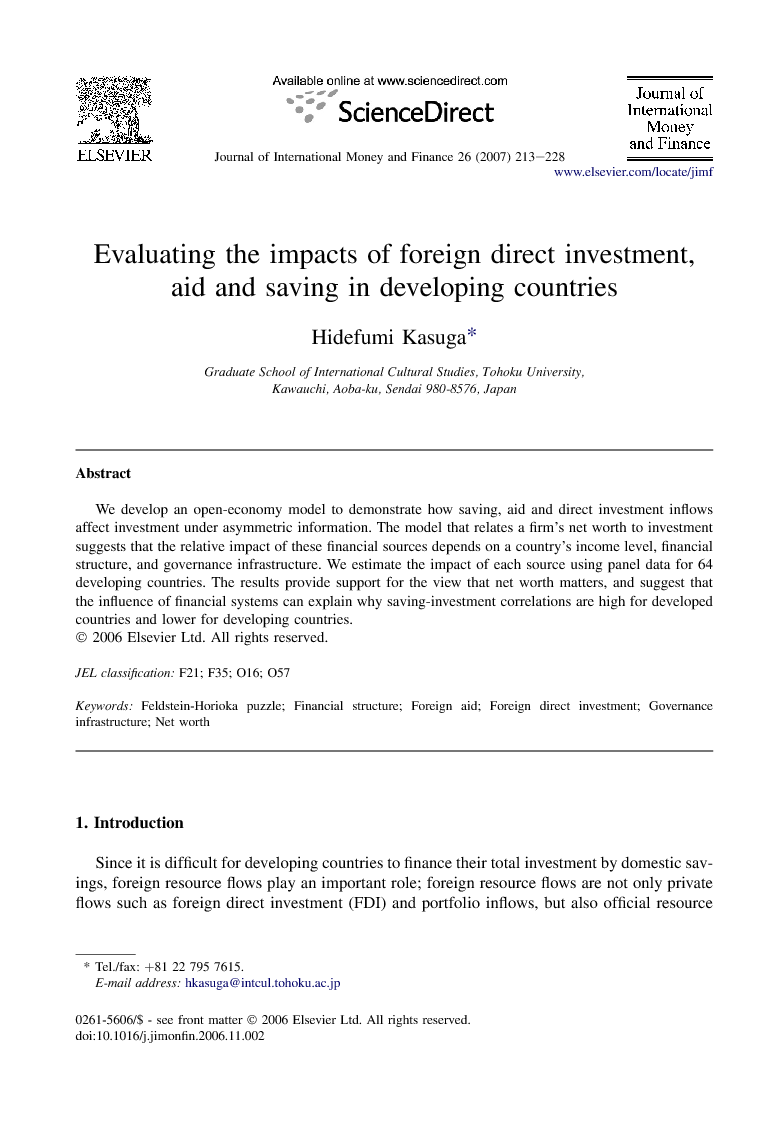 We develop an open-economy model to demonstrate how saving, aid and direct investment inflows affect investment under asymmetric information. The model that relates a firm's net worth to investment suggests that the relative impact of these financial sources depends on a country's income level, financial structure, and governance infrastructure. We estimate the impact of each source using panel data for 64 developing countries. The results provide support for the view that net worth matters, and suggest that the influence of financial systems can explain why saving-investment correlations are high for developed countries and lower for developing countries.

Since it is difficult for developing countries to finance their total investment by domestic savings, foreign resource flows play an important role; foreign resource flows are not only private flows such as foreign direct investment (FDI) and portfolio inflows, but also official resource flows such as grants.1 This paper demonstrates how each of these financial sources affects domestic capital formation by developing an analytical framework. We use an open-economy model that relates a firm's net worth to investment under asymmetric information (between lenders and borrowers), and provide a theoretical framework to understand how savings, FDI and foreign aid affect domestic investment. To examine the role of these financial sources, we estimate the impacts of them on domestic fixed investment using panel data for 64 developing countries over the period 1980–1999. The relationship between domestic saving and investment has been a major focus of research in international macroeconomics for two decades. Feldstein and Horioka (1980) investigated the effect of saving rates on investment rates, and found that the coefficient of saving rates was high (close to 1) in a study of 16 OECD countries; they concluded that the high saving-investment correlation implied capital immobility. A lot of authors have criticized this interpretation.2 However, most of them support Feldstein and Horioka's (1980) finding. For example, Murphy, 1984, Dooley et al., 1987 and Bayoumi, 1990 and Tesar (1991) find the high saving-investment correlation using cross-country data; time-series studies such as Obstfeld, 1986 and Bayoumi, 1990 and Tesar (1991) and panel-data studies such as Coiteux and Olivier, 2000 and Jansen, 2000 and Kim (2001) also replicate the finding. It is interesting to note that Feldstein and Horioka's result holds only for OECD countries; by using the sample of developing countries, Dooley et al., 1987 and Wong, 1990 and Vamvakidis and Wacziarg (1998) show that the saving-investment correlations become much smaller (close to 0).3 While Dooley et al., 1987 and Vamvakidis and Wacziarg, 1998 and Isaksson (2001) argue that foreign aid explains the low correlations for developing countries, none of these authors believe that lower saving-investment correlations reflect higher capital mobility in developing countries. The lower estimated coefficient on saving for developing countries remains an open question (our empirical results suggest that a difference in financial systems provides an explanation for this). High saving-investment correlations in OECD countries and lower correlations in developing countries suggest that the estimated coefficient on saving in the Feldstein–Horioka regression cannot be a perfect measure of the degree of capital mobility.4 Accordingly, although we run the Feldstein-Horioka regression in this paper, we do not use the estimated coefficient as a measure of capital mobility. To explain what the positive coefficient of saving represents in an open economy, we use the model of North–South capital flows developed by Gertler and Rogoff (1990). Their model focuses on the positive effect of net worth on capital formation under asymmetric information; the role of the borrower's balance sheet variable is modeled by Bernanke and Gertler (1989) in the study of business cycle, and Gertler and Rogoff (1990) extend the model of informational problems to allow for capital movements.5 By using Gertler and Rogoff's model that emphasizes the role of a firm's net worth, we make clear under what conditions financial sources such as domestic savings, foreign aid and FDI inflows positively affect domestic investment. In the light of the theoretical framework based on informational asymmetries, we estimate the impacts of these financial sources on domestic capital formation. Our results support the hypothesis that net worth plays a key role in determining domestic capital formation. Moreover, our theoretical framework provides a basis for evaluating the impacts of financial sources such as aid and FDI; the empirical results demonstrate that (as the theoretical model predicts) the effect of each financial source depends on a country's income level, financial structure, and governance infrastructure.6 The results are also useful for understanding why Feldstein and Horioka's result holds only for OECD countries and why the estimated coefficient on saving is lower for developing countries. The remainder of the paper is organized as follows. In Section 2, we first extend Gertler and Rogoff's model to allow for FDI, and explain how net worth and FDI relate to capital formation at the firm level. Then we make clear under what conditions domestic savings, foreign aid and FDI inflows positively affect domestic fixed investment at the country level. In Section 3, we estimate the impacts of domestic savings, foreign aid and FDI inflows on domestic investment using panel data for 64 developing countries, and discuss our alternative explanation for the Feldstein-Horioka puzzle (our view that saving-investment correlations reflect the effect of net worth rather than capital immobility). Section 4 summarizes the main results of the paper.

Although many authors replicate Feldstein and Horioka's (1980) finding (i.e., a positive saving-investment correlation), prior attempts to interpret it have been inconclusive. In particular, the smaller effect of saving on investment for developing countries is more difficult to interpret (because a lower saving-investment correlation implies a higher degree of financial integration if the effect of savings on investment reflects capital immobility). To propose an alternative explanation, we develop an open-economy model that relates domestic saving to investment under asymmetric information. In our view, the saving-investment correlation reflects the effect of net worth on investment in the presence of capital market imperfections. The theoretical model also shows that the impact of FDI outweighs that of savings in low income countries, and that the impact of aid can be a measure of aid effectiveness. We estimate the effects of savings, FDI, and aid on fixed investment using a panel of 64 developing countries. The basic results provide strong support for our model; saving and FDI positively affect fixed investment, and aid effectiveness depends on a country's governance infrastructure. Moreover, the theory proposes the hypothesis that a country's financial structure, which determines how much saving is spent on buying newly-issued stocks, influences the estimates; for countries with market-based financial systems, the effects of savings and aid become larger. Our results provide support for this hypothesis, which can explain why the saving-investment correlation is high for developed countries and lower for developing countries. While the positive estimated coefficient on savings is consistent with the capital immobility hypothesis as in Feldstein and Horioka (1980), only our view provides an explanation for the influence of financial systems on the estimations.