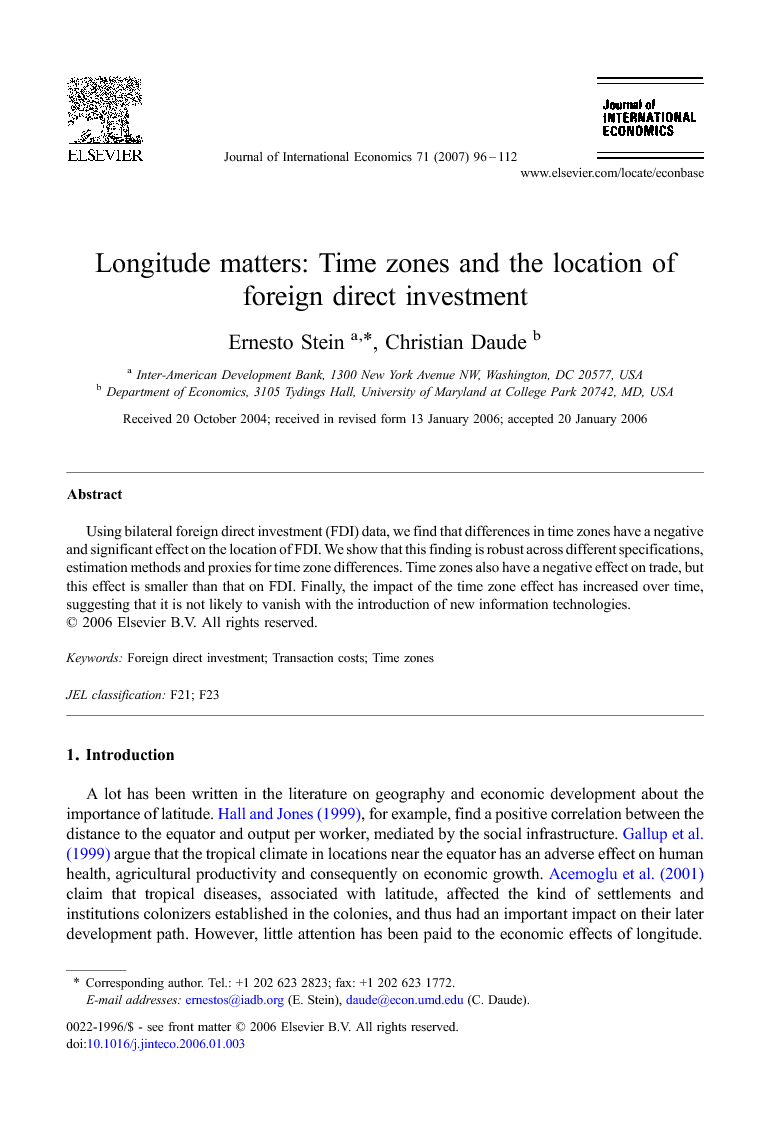 Using bilateral foreign direct investment (FDI) data, we find that differences in time zones have a negative and significant effect on the location of FDI. We show that this finding is robust across different specifications, estimation methods and proxies for time zone differences. Time zones also have a negative effect on trade, but this effect is smaller than that on FDI. Finally, the impact of the time zone effect has increased over time, suggesting that it is not likely to vanish with the introduction of new information technologies.

We have examined the effects of time zone differences on the location of FDI around the world. The results show that time zone differences have a negative impact on bilateral FDI. This impact is both statistically significant and economically important. Furthermore, once we control for the time zone effect, the coefficient of the distance is significantly reduced. This indicates that in the case of FDI an important component of distance is the East–West component, since transaction costs in activities that require real-time interaction between a firm's headquarters and its foreign affiliates are increasing in this dimension. Our results are robust to different measures of time zone differences, as well as different estimation procedures. These results suggest that empirical research on bilateral FDI should account for this effect in order to obtain consistent estimates for their parameters of interest. They may also be helpful to understand the patterns of competition to attract FDI. Specifically, host countries would be more exposed to competition from other countries in proximate time zones and less exposed to competition from potential host countries in more distant time zones, other things equal. Finally, our results suggest that the problem posed by time zone differences has become more relevant over time, with the introduction and widespread dissemination of new information technologies. This link between technology and the impact of time zones is more than mere speculation. It is a pattern that we observe more and more in everyday life, and is supported by numerous examples: like that of an acquaintance, who works for a business located in Washington, DC, but telecommutes from Buenos Aires; or that of the chief economist for Latin America at the World Bank, who is currently based in Bogotá. These cases would have been unthinkable just 10 years ago; and it would be hard to imagine the World Bank's chief economist for Asia working from Bangkok. Interaction with the staff would be, literally, a nightmare.