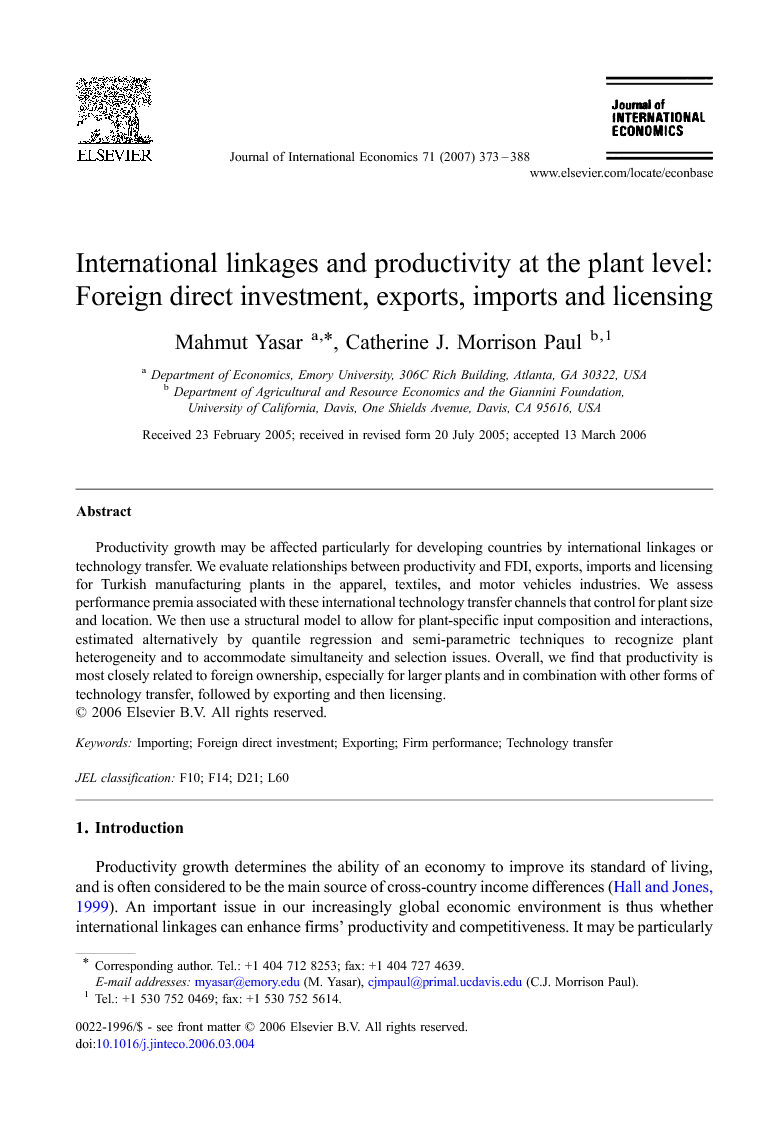 Productivity growth may be affected particularly for developing countries by international linkages or technology transfer. We evaluate relationships between productivity and FDI, exports, imports and licensing for Turkish manufacturing plants in the apparel, textiles, and motor vehicles industries. We assess performance premia associated with these international technology transfer channels that control for plant size and location. We then use a structural model to allow for plant-specific input composition and interactions, estimated alternatively by quantile regression and semi-parametric techniques to recognize plant heterogeneity and to accommodate simultaneity and selection issues. Overall, we find that productivity is most closely related to foreign ownership, especially for larger plants and in combination with other forms of technology transfer, followed by exporting and then licensing.

In this paper we examined the relationships between international linkages through four technology transfer channels and plant productivity in the Turkish apparel, textile, and motor vehicles manufacturing industries. Our evaluation was based on both regressions of performance indicators on international linkage variables, and estimation of a production function that captures more production structure and interrelationships. Our reliance on plant-level data, for our production function analysis in particular, raises heterogeneity issues. Standard productivity measurement techniques implicitly assume that plants within an industry share common productivity relationships, whereas they may actually differ in important ways. This potential heterogeneity is emphasized by Bernard et al. (2003), Melitz (2004), and Helpman et al. (2004), who theoretically examine the effect of within-sector heterogeneity of firms engaging in international activities. Our use of a translog functional form generalizes standard Cobb–Douglas production function models to capture plant heterogeneity through output–input interactions underlying productivity and scale effects. Incorporating data on key plant characteristics normally unobserved for econometric analysis also reduces difficulties arising from heterogeneity. However, at least two issues remain that were controlled for using alternative stochastic models. First, great variation in plant size could veil differences in productivity relationships for different size plants, which we deal with using quantile regression techniques. Second, endogeneity or simultaneity problems arise when including technology transfer variables in the production function, which we accommodate using an Olley and Pakes (1996) semi-parametric estimation procedure. The primary results do not differ substantively by stochastic specification. However, as expected from theory, estimates of the productivity relationships with international linkages vary by quantile, with stronger ties often apparent for the larger quantiles, and are underestimated compared to the OP estimates. Our results for all our estimation models and methods confirm that firms with international linkages are more productive. In particular, they support findings in the recent literature that foreign ownership (FDI) and exporting are positively related to plant-level productivity, and that the FDI effect is greater than that for exports. Further, licensing and importing technology are significantly related to productivity, and to the productivity implications of FDI and exporting. In addition, internal plant characteristics such as the share of skilled labor enhance the productive role of international linkages.