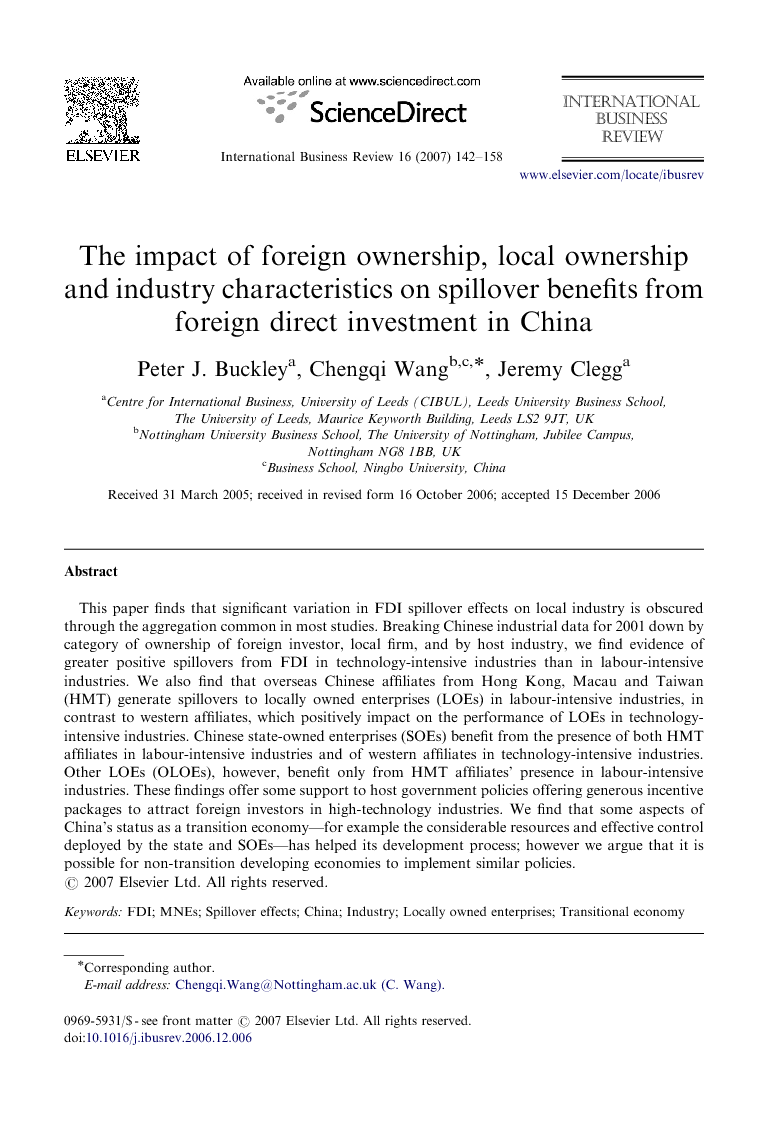 The past two decades have witnessed a striking transformation in the Chinese economy: from a centrally planned to an essentially market-oriented system, and away from an inward-orientated industrialisation strategy to ‘open-door’ policies aimed at integration with the global economy. Accompanying the progressive marketisation and internationalisation of the economy in this period, has been an unprecedented expansion in inward foreign direct investment (FDI) into China by multinational enterprises (MNEs). Indeed, in 2003 China overtook the USA and became the largest recipient of FDI (United Nations Conference on Trade and Development (UNCTAD), 2004). This growth in inward FDI is widely believed to be a key component of China's economic miracle. However, simply measuring the direct effects of inward FDI on Chinese industrial productivity will underestimate the overall contribution of foreign investment if spillover effects are significant (Buckwalter, 1995; Murphy, 1992; O’Malley, 1994). Therefore this study examines the spillover effects that arise from FDI in Chinese manufacturing. There is little controversy within existing theoretical research on the causes of spillovers, but a considerable amount of debate within empirical work to date, largely because the evidence on spillovers remains stubbornly inconclusive (Blomström & Kokko, 1998). Part of the problem may be that existing studies typically treat foreign affiliates (FAs), of whatever home origin, and locally owned enterprises (LOEs), of whatever type of domestic ownership, as a whole. They also pay no regard to the characteristics of the industry in which these firms operate. Such studies, therefore, look at the aggregate impact of overall inward FDI on all LOEs, across all manufacturing industries. More recent research (e.g., Buckley, Clegg, & Wang, 2005) has started to unpack these overall results, to allow for relationships within the aggregate data that can vary with category of foreign investors and by group of local spillover recipients. In a commentary article on the perspective paper of Meyer (2004) and Ramamurti (2004) calls for future research in the area of spillovers to follow Buckley, Clegg, and Wang (2002) and Gillespie, Riddle, Sayre, and Sturges (1999) in investigating the impact of diasporas on economic development in poor countries. By way of a response, this study aims to offer a step forward in breaking down the general relationship between FDI and LOEs’ performance. We group the whole of Chinese manufacturing into labour-intensive and technology-intensive industries; FAs into those originating in Hong Kong, Macau and Taiwan (hereafter, HMT) versus those originating from western countries; and the LOEs recipients of spillovers into state-owned enterprises (SOEs) and other LOEs (OLOEs). These classifications form the basic analytical framework of this study. These distinctions are particularly crucial in the context of China. First, it is generally agreed that China's comparative advantage is its relatively low labour costs compared with developed countries and with other emerging economies (Cheng & Kwan, 2000). This has been a leading motive for MNEs to invest in labour-intensive activities in China (Fung, Lau, & Lee, 2002). Second, the two major groups of foreign investors in China—firms from HMT and from western countries—differ enormously, in terms of both motivation and investment behaviour (Huang, 2004). This contrast means that FAs in these two ownership groups can be expected to impact differently on LOEs. Third, SOEs and OLOEs are two very heterogeneous ownership types dominating Chinese manufacturing industry. They diverge substantially in many respects. These include the structure of property rights, technological capability, learning incentives and government support, among others (Wang, 2003). These dissimilarities suggest that the two types of firms may have different absorptive capacities, and furthermore that these will vary by industry. Therefore, the richness and diversity of FDI into China, and of its potential impacts, provides a unique opportunity to explore the complexity of FDI spillovers, within the environment of an economy undergoing transition. In this paper, we pursue the idea that the spillover effects of FDI may be not as uniform as many studies suggest. In examining the productivity impacts of foreign ownership on China's domestic industry, the paper is marked out from existing studies in the following three respects. First, by allowing the results to vary between labour- and technology-intensive industries, we expect to see the extent to which spillover effects vary with industrial technology intensity. Second, we employ alternative measures of foreign presence, and use these to investigate more deeply the influence of the source of FDI. This procedure enables us to distinguish effects that are specific to the type of country of foreign ownership, and to compare these with the overall effects of foreign ownership. Third, we allow the results to vary with respect to different types of domestic ownership. So doing enables us to observe the distribution of spillovers between differently owned LOEs. Fourth and most important, we combine the above three dimensions by organising the groups of foreign and locally owned firms within different industry categories. This systematic approach provides an opportunity to uncover ‘who benefits from whom’ in which types of Chinese manufacturing industry. It is this task that constitutes the central aim of this study. If significant between-group effects are captured through the above procedures, it would imply that studies conducted only at aggregate level are deficient. It is quite possible that in aggregate analysis ‘good’ and ‘bad’ nations, industries and ownerships of LOEs may offset one another, leading to the washing out of important effects. We expect that our breakdown will reveal sub-relationships in the data that up to now have remained hidden within the aggregate relationships reported in most studies. In this way, we aim to complement and deepen the state of knowledge on spillover effects in Chinese industry, which in the main has been confined to general conclusions. Section 2 sets the theoretical scene, together with a brief review of the relevant empirical literature. A description of the variables, the models adopted and data employed, follows in Section 3. Section 4 discusses the econometric results, while Section 5 concludes.

Governments of developing and transition economies pay special attention to the impact of FDI, using this as a criterion for measuring the success of their FDI policy. Such governments often favour inward FDI in technology-intensive industries over labour-intensive industries, believing that this will bring in new technologies and know-how and therefore more spillovers to enhance the competitiveness of LOEs. In this paper, we leave aside the issue of whether this perception is true, and instead test whether the magnitude of spillovers is associated with the degree of technology (labour) intensity of the host industry involved. Overall, we find evidence consistent with the existence of greater positive spillovers from inward FDI in technology-intensive compared with labour-intensive industries. This finding agrees broadly with the conventional hypothesis that FDI by MNEs is based on technological ownership advantages. It also justifies the policies of governments of developing countries, such as China, which have in recent years offered generous incentives packages to attract foreign investors to high-technology industries. Our study confirms that distinguishing between different categories of foreign investor, as theory predicts, is an essential step in analysing the impact of inward FDI. We find that HMT affiliates generate more spillovers to LOEs than western affiliates in labour-intensive industries. In marked contrast, in technology-intensive industries, the presence of western affiliates exerts a larger impact on the performance of LOEs than does that of HMT affiliates. From these findings we conclude that foreign affiliates’ technology intensity is a key driver of LOEs’ growth. The procedure of drawing a clear distinction between different categories of ownership in domestically owned Chinese firms is also supported by our results. We find that in general both SOEs and OLOEs seem to benefit more from inward FDI in technology-intensive industries than in labour-intensive industries. Our results indicate, however, that SOEs benefit from the presence of HMT affiliates in labour-intensive industries, and from the presence of western affiliates in technology-intensive industries. In contrast, OLOEs seem only to benefit from the presence of HMT affiliates in labour-intensive industries. In terms of methodology, our study represents a step forward in understanding the determinants of spillovers from inward FDI. New insight has been gained from the breaking down of industries into labour- and technology-intensive groups, of foreign ownership into HMT and western categories, and of locally owned firms into SOEs and OLOEs. The paper presents a clue as to the true diversity of issues that arise within the complex area of spillovers. There are some policy implications that arise with regard to the use of FDI as a tool for economic development in developing and transition economies. Transition economies often have in common a history of central planning, either with the support of the Soviet Union, or at least of history of imitating the Soviet system. The legacy of this is that these economies have an existing industrial structure from which to move towards a market-driven economy. This contrasts markedly with the position of developing countries in general, which do not have the benefit even of established staple industries, or educational and technological infrastructure. Therefore, developing countries in this mould do not have to confront issues related to SOEs when designing policies toward inward FDI, e.g., of having to take into account the possible negative impacts of multinational firms on the domestic sector, and of how to avoid these. When China designed its policy towards FDI, it had in mind the effects FDI would have on its then less competitive SOEs; the policy response was to recast SOEs as a major conduit for foreign technology to enter the Chinese economy, notably through joint ventures. The implications of the findings of this study for developing countries are that they should strive to achieve at least some minimum level of domestic industrial technological capability, and of technical education. Also, the governments of developing countries need to look at the ways in which initially disadvantaged domestic firms can be helped to acquire the necessary assets to offset their disadvantages. This might be through a close association with foreign firms, in something approximating ‘inward internationalisation’ as a means of asset augmentation. The wider policy implications of our discussion for developing countries in general, and non-transition economies in particular, can be summarised as dependant upon pre-existing industrial structure and its ownership. Like China, quite a few developing countries, such as Vietnam and Laos, in South East Asia, are going through transition to market economy. It is interesting to ask whether ‘transition’ imparts anything additional to any topic related to development. The Chinese experience of encouraging inward foreign direct investment and foreign equity participation in SOEs’ restructuring process has proven very successful for China. The governments of many developing countries have some scope to build up domestic technological capability, to improve the performance of domestically owned firms through, for example, strengthening the links between state research institutions and universities and firms. A case in point is that of Korea, which promoted the growth and development of large Chaebol through supporting state research and research in other institutions. Our discussion suggests that non-transitional developing countries, without the inheritance of state-owned enterprises, can nevertheless implement a beneficial policy of inward FDI, if they give some attention to the requisite infrastructures. Given this, foreign equity ownership in local firms that are either underperforming, or that have the potential to perform better, may yield the industrial capability gains that the transition economies have enjoyed.