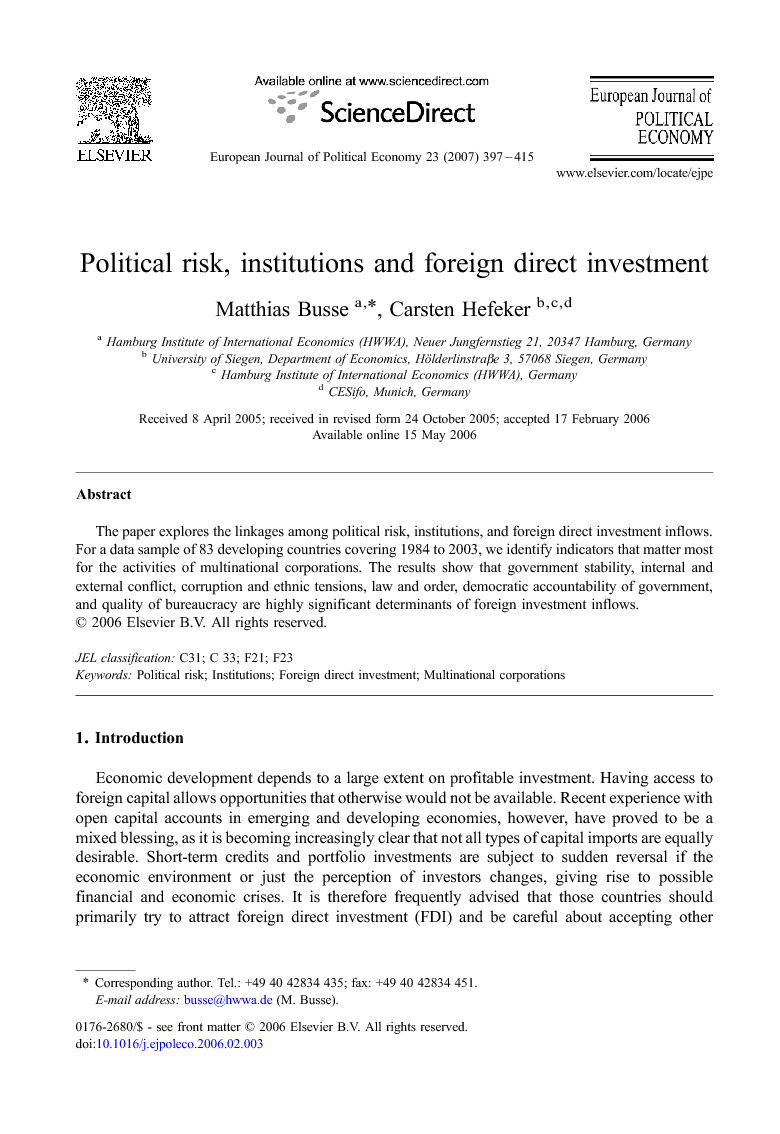 The paper explores the linkages among political risk, institutions, and foreign direct investment inflows. For a data sample of 83 developing countries covering 1984 to 2003, we identify indicators that matter most for the activities of multinational corporations. The results show that government stability, internal and external conflict, corruption and ethnic tensions, law and order, democratic accountability of government, and quality of bureaucracy are highly significant determinants of foreign investment inflows.

Foreign direct investment is a desirable form of capital inflow to emerging and developing countries because such investment is less susceptible to crises and sudden stops. The goal of this paper has been to explore in detail the role of political risk and institutions in host countries as determinants of foreign direct investment. As we have pointed out, our main contribution is not to find new and provocative policy recommendations but to distinguish several alternative hypotheses about the relative influence of risk premia and institutions. The results of the paper are summarised as follows: First, in the cross-country analysis, covering a period of 20 years, we find only three indicators for political risk and institutions that are closely associated with FDI (government stability, religious tensions, and democratic accountability). Yet this approach, widely used in the literature up to the mid-1990s, neglects changes in the variables of interest over time, which are clearly relevant for the interpretation of the results. Second, we establish more than twice as many statistically significant links in the fixed-effects panel setting. Yet we suggest that even this specification may lead to biased results, due to autocorrelation and endogeneity of the independent variables. Third, when we use the Arellano–Bond GMM dynamic estimator, which effectively addresses both autocorrelation and endogeneity in the time-series analysis, the results show that in particular government stability, internal and external conflicts, law and order, ethic tensions, bureaucratic quality and, to a lesser degree, corruption and democratic accountability are important determinants of foreign investment flows. Based on our results, these political risk and institutional indicators matter the most when multinational corporations confront decisions about where to invest in developing countries.